The woman who has given an Indian voice to English theatre completes 25 years on stage. Lillete Dubey on her life and art in conversation with Divya Unny 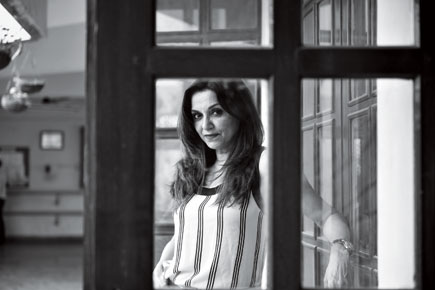 “Breathe. Let it come from your gut. Open your voices… and your minds. Let your body flow. It’s not about the lines. It’s only about this moment. Live it. Go, do a great show.” That’s Lillete Dubey, inspiring 11 actors, minutes before they hit the stage for the 20th show of Boiled Beans on Toast written by Girish Karnad. The third bell goes off, a rendition of Maha Ganapathim by KJ Yesudas welcomes the audience as the actors give the final touches to their make-up, in the wings. Dubey has now let them go. “This is theatre, it’s an actor’s medium. Once the stage is open, the director has no business on it,” she says, sipping hot, black coffee.

Having just returned from a meeting in Delhi about an art collaborative, she dives straight into the rehearsal of her latest musical production Gauhar, based on India’s popular courtesan from Calcutta. “I got 30 minutes before my actors walk in, that’ll be enough, right?” she asks, as her Man Friday sets up the table with biscuits and beverages for the team. Dubey is celebrating 25 years of her theatre company Primetime and she’s lost count of the number of rehearsals she has conducted in recent months. “You’ve got to keep the ball rolling you know. When people walk up to me and say, ‘25 years’, I feel like I started the company yesterday,” she says.

At 61, she’s among the handful from her generation who continues to produce new work within Indian cinema and theatre. Dubey’s glamour can deceive those who don’t know her commitment to theatre. Apart from being a popular screen actor, she has produced over 32 different plays and performed over 3,000 shows across the globe, making Primetime one of the oldest and most-travelled theatre companies in India.

She gave herself a new lease of life when she moved to Mumbai from Delhi with her husband Ravi Dubey at the age of 40. “I had my two young daughters growing up and I had been thinking of setting up my company for years. I was very clear about my reasons to do so. I wanted to find an Indian voice for our English theatre in India. What Mira Nair did with Monsoon Wedding (2001), I had done about five years ago with Dance Like a Man,” Dubey says. With over 500 shows, Dance Like a Man directed by Mahesh Dattani and produced by Dubey, is one of India’s most successful theatrical productions, as it revealed Indian culture and ethos to the West. It wasn’t the only one.

From a play about nine Iraqi women breaking barriers in a country overshadowed by war (Nine Parts of Desire), to a play about a veteran actress re-living her glory in undivided India (Where did I Leave my Purdah?), to one based on life survivors of child abuse (Thirty Days in September), Dubey’s productions cannot be typecast as they dabble in many genres. From family dramas to musicals to plays with a strong socio-political context, she gave something to every theatre lover. “My plays are not necessarily perfect, but I never wanted to stick to a theme or genre. I love to tell stories of strong, independent women, so I do. I enjoy telling stories that transcend social, economic, cultural spaces. It’s the human condition which is your common denominator, whether it is mortality or death or just getting on with life. Plays like these have a universal language and that’s what interests me,” she adds.

This interest in various topics stems from her academic upbringing in Delhi. She was trained in classical music at the age of five and grew up listening to her father quote Shakespeare and Keats. She says, “Where I come from, nobody did this kind of thing [theatre]. My mother was a doctor, dad engineer, my grandfather was a judge. My house was full of books. I call my dad a ‘renaissance man’, from journalism to medicine to economics, he could speak about anything under the sun. He wasn’t just erudite, but he had an intellectual curiosity about everything. So when I told him I was taking up literature in college, he was not too happy. He thought I would at least do economics, but I said, ‘no’!”

As a child she would put up shows for her family and friends and charged 10 paise per performance. She recently met someone on a flight who reminded her how she’d get two kids to hold up a curtain behind her and perform for a few pennies. “Even then I was a good producer,” she adds with a laugh.

However, her introduction to theatre director Barry John at Lady Sri Ram College, Delhi, changed her life, she says. Dubey was part of the earliest group of actors in John’s company Theatre Action Group (TAG) which included others such as her husband Ravi Dubey, Siddharth Basu, Roshan Seth and Shah Rukh Khan. “You could say I went to the Barry John School of Drama even before he had one. If I hadn’t met him, my life would have gone another way,” she says. From Greek tragedy to comedy, Shakespeare to Brecht to Tennessee Williams, from absurd theatre to experimental theatre, the group left nothing undone. “We were hungry to do all kinds of theatre.”

She admittedly owes much to the generation she grew up in. “We are from the 70s, the generation that was a lot more adventurous and free-spirited than the youth now. We were stylish, but even that was with purpose. We had very little money, but a lot of self- confidence. We were happy the way we were. We were not looking to get anything fixed. We were just living it up. Our generation was more opinionated and they were not scared to be themselves. Today’s youth is a lot more conforming, trying to be like everyone else,” she adds.

As a youngster, she didn’t shy away from risks. She even modelled to fund her theatre aspirations. Her first shoot was for a TCM towel company. She went for the audition with a friend and was full of apprehensions. But got paid a princely sum of Rs 500. She recalls, “The Dunlop calendar was the one that really got me popular because I was the only Indian face on it. Many thought I looked like Zeenat Aman and there were a few film offers now and then, but I was only doing it so I could continue performing on stage.”

From setting up a clothing store to a production company to working in television, Dubey was constantly at work. Despite an early marriage, she was too entrepreneurial to stay at home. “Now that I think back, I may have gotten married too early, but it never affected what I really wanted to do.” She acted in her first film Zubeidaa (2001) at the age of 47 which would have been considered a late start for an actor. Even as an independent actor, Dubey created a niche.

She has defied expectations many times on screen. She was the only actress her age who could carry off smoking a cigarette in a shiny blouse and petticoat, with rollers in her hair, in Monsoon Wedding (2001). It was an image that gave Dubey an edge over others. Many even called her India’s Susan Sarandon. “What I did in Kal Ho Naa Ho (2003) was a bit more scandalous, but that was the idea. I wanted to experiment and since I started so late, I did not really have any image to maintain. People started telling me things like ‘You will be the next Aruna Irani’, except I did not want to be the next anything. I just was happy being myself,” she adds.

In many ways her image as an actor often overshadows that of a theatre- producer and director. She takes her plays across the world, but insists that her company runs on its own might. “There’s no point having a theatre company that isn’t self-sustaining. It’s unfortunate that today people talk about the bit role I’ve done in Lunchbox (2013), and not of the 20 years of theatre I’ve been doing. That’s because India isn’t a theatre-going nation. Maybe one person out of a hundred will choose a play to a film. That’s why when people say, ‘We love your plays,’ I feel happy,” she adds.

Dubey continues to juggle numerous projects. She wants to revive the mythological drama Jaya next year. And wants to create plays based on the popular short stories of Mahasweta Devi and Gita Mehta. She’s part of a British Channel 4 period saga Indian Summers and has many scripts to choose from for her next movie role. But more than anything, she can’t wait to come back to stage. “When I returned from the premiere of The Second Best Exotic Marigold Hotel (2015), everyone was talking about it. I walked straight into Prithvi for a show and thought to myself, ‘There’s nothing that substitutes this.’ No film. No TV show. Nothing. Doing theatre is like being on a trip. Never ending. And it’ll be like that for me forever.”