Life in a Dream 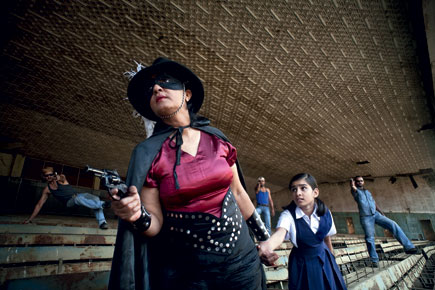 
Recently, at a Rajesh Khanna retrospective at Delhi’s Siri Fort Auditorium, I sat next to a woman and her young—perhaps seven-year-old—daughter. The child watched a film about 36 years older than her—it was Aradhana—with a raptness that was rather lovely, only interrupting occasionally to confirm with her mother her sense of what had just taken place on screen: “Ab usko pata chal gaya ki woh uski maa hai? (Now he’s found out that she’s his mother?)” When the lights came on, she realised the three-hour-film had ended—and there hadn’t been an interval. “Par humne mall mein toh khaaya hi nahi! (But we didn’t even eat anything in the mall),” she exclaimed. “Beta, yeh mall nahin hai (My dear, this is not a mall),” laughed her mother, catching my eye. “Baahar jaake khayenge, chalo (We’ll eat outside, let’s go).”

Wandering through the multifarious attractions of Project Cinema City—a show curated by Madhusree Dutta that emerges out of four years of interdisciplinary research on the production and reception of cinema in urban space by the arts initiative Majlis and KRVIA (the Kamla Raheja Vidyanidhi Institute of Architecture)—my thoughts returned to that little girl, for whom the experience of cinema in the city is so completely mediated by the idea of the mall. As one fragment in a massive file kept on the show’s Table of Miscellany reads: ‘Why Go Out? (When there’s a multiplex inside)’.

The multiplex is just one of the sites of cinema in this file, which is a collection of maps and photographs and snatches of conversation about the Mumbai film industry threaded together by Hansa Thapliyal’s wryly matter-of-fact commentary. (Sample: in the section Photo Studios, documenting people posing with filmstars as backdrops: ‘Perhaps following the known codes of payment in the film industry, it costs more to be photographed with the men.’) The file provides a superb introduction to the exhibition, sharing with it an encyclopaedic sensibility that is alternately serious and playful. Browsing through it, you might encounter spot boy Bhaiyalal N Patel telling you what you need to do to create an artificial Juhu beach for a film set, or find yourself looking at studio versions of the locales that you’ve seen in so many Hindi films: ‘the den’, ‘the village’, ‘police station and lock-up’, ‘Krishna Cottage’. You might also find, in the Bar Dancers section, this poignant timeline of a woman’s life:

Organised by the National Gallery of Modern Art and Ministry of Culture to commemorate 100 years of Indian cinema, Project Cinema City brings together more than 20 artists, designers, technicians and architects in a collaborative show that excavates the connections between the Hindi film industry and the city of Bombay/Bambai/Mumbai, which is both the real-life site of its birth and the imaginary locale where so many of its narratives unfold.

The traits of urban modernity—anonymity, artifice, technology, speed—are echoed in our experience of cinema. Project Cinema City contains several art works that draw on these connections, inviting us to enter a space of fantasy that’s as much about the excitement and frisson of the city as it is about the pleasures of the cinematic. The first of these is a collaborative audio-visual piece that involves a series of women talking of the experience of watching films. One woman talks of how she missed out on a family expedition to the first air-conditioned theatre (Liberty) to show a Hindi film, yet another reminisces about the women of the family doing ‘full-make-up’ in the cinema bathroom so that they were actually late for the movie.

The most marvellous work is documentary filmmaker Paromita Vohra’s So Near yet So Far, composed of three different kinds of phone boxes—a switchboard-era box with various lines for operators, a yellow coin-operated pay phone, and a small red plastic-dial telephone—each of which provides instructions to connect to various kinds of soundtracks. On the switchboard phone, you can listen to fragments of interviews with real-life operators, as well as a text by Baburao Patel which reads like the memoir of an office secretary. The yellow pay phone provides a more workaday, cheerful introduction to what it calls ‘long-distance love’: pressing 3 for Babli will bring you a song that goes “Babli tero mobile, wah re teri ismile (Babli your mobile, and wow, your smile)”, while pressing another number leads you to an exhausted man coming up against the recorded female voice of a BSNL broadband complaint system. Vohra’s work encourages laughter—the red telephone for example, comes with a written direction in Bambaiyya Hindi ‘Saala phone nahin chala toh ek phatka dene ka (If the bloody phone doesn’t work, give it one whack)’—but it is also a beautifully thought out meditation on the telephone’s role in romance. Once thwacked, the red phone, for instance, conjures up the excitement, urgency and danger of the phone booth and the cross-connection. Partly it’s the use of the Aaj ki Raat soundtrack from the film Anamika (1973), which originally accompanied a vivid, aestheticised picturisation that involves Helen being sexually attacked in a phone booth. But partly it’s just that the exhibit’s sense of mystery and interactivity replicates the delicious sensation of picking up a telephone receiver and finding yourself connected to an unseen world.

Another such interactive work is Archana Hande’s Of Panorama, an exercycle on which the viewer perches to find a life-size image of herself projected onto a series of outdoor backdrops that change and move as you push the pedals. What the photo studio does in still form is here achieved in mobile form, enabling the viewer to actually enter a fantasy world, some of whose frames seem adapted from Hande’s own earlier part-animated artwork for All Is Fair in Magic White, a quirky 2009 show which drew unexpected connections between our dreams of clean cities and our fair-and-lovely obsession.

A lot of space is taken up by a collaborative work called Cinema City Live. This consists of an intricate arrangement of large grey PVC pipes where the mouth of each pipe works as a viewfinder for an image. It’s obvious that the network of pipes is meant to represent the real-life network of places and people that is the film industry. But somehow the piece fails to draw you in.

Some of the more famous names from the art world—Pushpamala N and Atul Dodiya—have contributed more traditional pieces. Dodiya’s disappointingly flat 14 Stations consists of large signboards for stations on Mumbai’s Central Railway line, each anointed by a Hindi film villain of old: so Rehman ponders above Chinchpokli, a young Shatrughan Sinha gets Parel, while Dadar goes to Ajit. The associations between the place and the persona aren’t obvious, at least not to a non-Mumbai denizen—and the work itself, while fun to look at, seems a trifle pointless. The effect is made even more grating by a wall text that has to inform us that the opaque patches of red on the signboards are a gesture to Mumbai’s recent history of violence in public spaces.

Pushpamala N, on the other hand, gives us a performance photography piece that’s a fitting sequel to her 1996–98 work Phantom Lady or Kismet. The current work, Return of the Phantom Lady or Sinful City, again features Pushpamala as Fearless Nadia in a mask and cape, this time rescuing an orphaned girl from a rather impressive top-hatted villain. The photographs take their heroine—and us—through a range of Mumbai locales, new and old and in-between. In one image, three villains in silhouette on a parapet aim their guns at our escaping heroine in a hilarious tableaux set against a new glass building and a construction site strewn with trucks and bulldozers. In another, the Phantom Lady awaits the arrival of the top-hatted villain in a derelict old theatre. The desired effect may be an obvious one, but there is something charming about the way the image achieves a kind of perfect blend of fantasy and realism: the real cinema theatre as a site of fantasy—off-screen.

Shreyas Karle’s Vastusangrahalaya ki Dukaan, which describes itself as a ‘speculative museum of cinema at a time of post-cinema’, is another version of fantasy-made-real. Karle takes what he calls ‘fetishes foregrounded by Bollywood’ and casts them as sculptural objects. So there is Hands Up, which playfully gestures to a feedback loop between the performativity of real-life Mumbai goons and their on-screen avatars. There’s a multiple place-of-worship locket, and the bottle of Ma ka Doodh (mother’s milk), with a fictitious history: ‘MK Milk, which proved to be a big hit till the Censor Board and GOI decided to ban it…’

Karle’s work has a jokey charm, but draws on a familiar mode of nudge-nudge-wink-wink engagement with Hindi cinema. Only its sculptural form sets it apart from The Calendar Project, a kind of homage to popular calendar art. The calendars, created by different artists, vary in the quality of their wit but add a plethora of visual detail to the show. An imagined 1953 calendar ad for walking sticks features Gandhi (obviously), but also includes a small photo of Gandhi with Charlie Chaplin with the legend ‘the great stick figures of our times?’, while Sashikant Thavudoz’s faux ad for a possibly fictitious tonic—‘Aapko chahiye City Life (You need City Life)’—makes quietly strategic use of a bindi-wearing Rekha as the wife waiting for you at home.

The pleasures of Cinema City, as is probably apparent, are often the pleasures of nostalgia. While there’s a strong archival sensibility at work, the historical gets treated with a wink and smile. It never appears as an object of criticism. The accompanying book-length timeline (though I’ve only glanced through it) may avoid such pitfalls by dint of sheer exhaustiveness, but the art reveals a tendency to romanticise the past, both of the city and of cinema. “Nowadays the hero and the villain are the same colour,” complains an old poster painter. There is the clearly-displayed love-affair with early technology (panorama, telephone, old ads, older films) and the suspicion of the transformations that are altering our experience of the urban (Pushpamala’s construction sites as a place of villainy, the multiplex seen only as a space that insulates us from the ‘real’ city). It’s important to look at our past selves with affection. But coming out of Cinema City, the present seems like a foreign country. The present, though, is all we have. If she’d hated the multiplex, where would the little girl go?