Time shrinks on stage as performances get shorter and smarter 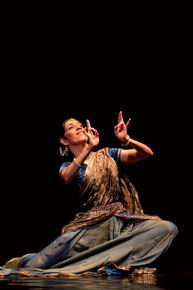 Time shrinks on stage as performances get shorter and smarter

Last month, at Paris’ Opera Bastille, the Aditi Mangaldas Dance Company presented an eight-minute—yes, you read that right—excerpt from Timeless, a group contemporary work, inspired by Kathak. In its original form, Timeless is an hour and seven minutes long. Timeless, in its short and tweet avatar, evolved over time, literally, following an invitation from one of the reputed French newspaper houses that was celebrating its 70th anniversary. “The organisers were very particular about what they wanted us to present,” Aditi Mangaldas says, over a phone call from Delhi, “They had seen and heard about Timeless and were keen for us to present that work.” Only, the time allotted to them, to present it, was a mere eight minutes.

“I was baffled,” Mangaldas says, “But after a round of conversation with the organisers, I understood they had performances by groups from across the world, and if each one was to perform for half an hour, the celebration would last a day.” Mangaldas pragmatically converted that opportunity to an advantage: “It allowed me to relook the work, stand back a little, detach myself, look at it with my third eye.” The result was a taut and tight version. “I’m not saying that’s the norm,” Mangaldas clarifies, referring specifically to the notion of time in the context of a performance, “But this is the world we live in; and we cannot remain isolated from what is happening around us.”

On 1 October, in Chennai’s Museum Theatre, the Prakriti Foundation, a Chennai-based cultural organisation, showcased ‘An Evening of Short Plays’. Eight ten-minute plays in Tamil that were part of the Short + Sweet Theatre Festival (held in August), presented a series of sketches—political satire, fantasy, human drama and desire, all in short capsules. “The ten-minute play,” says Mathivanan Rajendran, Chennai- based theatre actor, and founder of Stray Factory Entertainment, a standalone theatre company, “feels like a gateway drug to the stage; it’s an opportunity to expand one’s mind and craft for short-term gratification.”

Until recently, the performing arts were shaped by languorous servings of elaborate experiences, but now it is not unusual to hear of short-term gratification. Things are changing, and fast. In the dynamic world of the performing arts in India, ‘Time’ is the new character. Across genres—theatre, dance, music—and both in classical and contemporary, duration and length are becoming integral components, subtly—and often not—finding mention in programme notes or acting as a lure in publicity material.

Let’s look at a performance a couple of months ago at the National Gallery of Modern Art (NGMA), Bengaluru. The performance titled The Padme Project, by Anita Ratnam’s Arangham Trust, was billed simply and straightforwardly as ‘an evening of contemporary music and dance’. The curtains came up sharp at 6.30 pm, to the opening segment, titled ‘Float’, a 20-minute piano rendering by classical-contemporary pianist, Anil Srinivasan. Musical pieces from Western and Indian classical genres were interspersed, weaving together a singular, seamless fabric of melody. Less than two minutes after the piano vanished, seven dancers (six girls and a young man) filled the stage, and for the next 30 minutes presented a contemporary work—choreographed by the Netherlands-based dancer and choreographer, Kalpana Raghuraman—that attempts to explore the role of ‘religion and spirituality’ in the world we live in.

At 7.25 pm, exactly, well before a mobile could break the rhythm of the work’s soundscape, or audience members could begin checking their email or WhatsApp messages, or demonstrating classic and acceptable signs of urban restlessness, the curtains came down. A big round of applause followed and the audience trickled out looking perceptibly pleased.

Call it the twitter effect on the performing arts, but urban patrons— restless, impatient, easily bored, fidgety and finicky—seem to prefer portions over productions, excerpts over extensiveness, experiments in form and content over engagements that are slow and languorous. As a result, the paucity of time is what defines the context of the arts both for the creator and the consumer.

“Look at the horrendous traffic in our cities,” says Ratnam, “Free time, you see, is sacrosanct.” Having embarked on The Padme Project this year with an intent to mentor young dancers, Ratnam believes the space now is “not to merely create interesting content using time but to create space where there is more relevant and meaningful sharing and exchange of creative content and process among the dance community and with those who consume it. Adaptability and flexibility are the key to this.”

Across India, classical dancers too are feeling the pressure of time. Fortunately, they aren’t allowing it to bog them down, and are, instead, creating work that sparkles with brevity. In the early 2000s, when SMS was finding more popularity, Ananda Shankar Jayant, remembers performing a Padam (an item in the Bharatanatyam repertoire) wherein she, the heroine, begged, and rebegged a kili (a parrot), to carry a message to her lover, from another land. For a full ten minutes, elaborately, Jayant remembers, “I did abhinaya (expression) for a scene where an imaginary bird refused to take my message and kept fluttering back onto my shoulders.”

After the performance, back-stage, an old Mami (aunty in Tamil) met Jayant, and referred to that scene, in particular, and said jokingly, in Tamil, “Ye ma ivalavu kashtapatte (why did you suffer so much, ma?); Pesame oru SMS annappa vendidu daane (you could have just sent off an SMS, no?).” The Hyderabad-based classical dancer, choreographer and administrator, still remembers that episode. “There is meaning in being crisp. Plus, we have to leave a lot to the imagination of the audience,”says Jayant. As a thumb-rule, her productions— solo and group—have not exceeded the hour-long mark from “curtain up to curtain down”.

The new formulation in the performing arts is simple: short is sweet and less is cool. Look at the success of the Short + Sweet Theatre Festival (in Chennai, in particular), which concluded its fourth edition this August, and has been enjoying patronage from the small but significantly growing theatre community in the city. As many as 50 plays premiered this edition and nearly 30 among the 50 writers were first-timers. Ranvir Shah, cultural activist based in Chennai, and whose Prakriti Foundation presents the festival, argues against the assumption that Short+ Sweet’s success is a reflection of dwindling attention span among the audience. “I think it’s the quality of work that merits and determines attention span. I have, as an audience member enjoyed watching a series of ten-minute plays as much as I have watching the Mahabharata for nine hours, straight.”

Lynne Fernandez, managing trustee, Nrityagram, a residential school for Odissi and other classical dances, based in Hesaraghatta (on the outskirts of Bangalore) agrees with Shah: “All performances need an audience; all performances are ultimately aimed at transforming the viewer, and taking the viewer on a journey into another realm. The health of a performance tradition is a reflection of the above.”

From a creator’s standpoint, TM Krishna, a Chennai-based classical musician, writer, author, wonders if this shortening is the “result of a kind of a corporatisation of the arts; where the idea is to create entertainment. Why, for instance,” he adds, “should someone be thinking of something in the context of the arts, from the point of view of time? Time should be determined by the work, the production and should not emanate from the idea of what is saleable. Artistically, I find that very problematic.”

We ask Anil Srinivasan what he thought of being allotted a mere 20 minutes for ‘Float’. Was he able to do justice to the work? “You see, we play different roles in different productions,” he explains, “It’s like being a character in a play and adhering to the script. I cannot forcibly fit my performance aesthetic on to someone else’s craft, right?”

Equally important is the relationship between the audience and the artiste. “Currently,” says Veena Basavarajaiah, Bangalore-based classical and contemporary dancer, “the nature of the audience is that of a ‘consumer’ and artistes are largely producers of ‘art-works’ or ‘pieces’. In such a commercial context, artistes are creating works that largely entertain and are saleable.” Basavarajaiah is conscious that the “length of the work does not necessarily reflect upon the quality of work or the intensity of the performance.” Her own repertoire is a reflection of that. Maya, a 20-minute work she created at the Gati Residency in Delhi, took her three months to create. Another ensemble piece, Mooki, took more than a year to evolve into a 40-minute piece. “There are some works that question the nature and the purpose of the performance itself. Duration is not really an indicator of the work and how effective it is.”

Fortunately though, for those who like the idea of lingering and leisure in the arts, this shrinking of form and format, is primarily an urban phenomenon. Just last week, a small village in Tamil Nadu’s Kanchipuram district, played host to its annual all-nighter— from 7 pm to 7 am; a Koothu festival that had the village gather around and witness the unfolding of traditional theatre. A handful of urbanites milled around, too, in an attempt to show solidarity for what is a dying tradition.

“I think it’s unfair to generalise this Twitter effect in the performing arts,” says Kolkata-based Kathak and contemporary dancer, Vikram Iyengar, who is readying to premiere his new work at Spaces, in Chennai, in the second week of October, “But having said that, we live in a culture that has in general lost its ability to savour something leisurely. Festivals and its organisers are constructing their itineraries around the idea of time; you are given a slot to perform, and that has certainly had an effect on dancers.”

Most importantly, Iyengar wonders if this trend has its roots in “artistes and their own insecurity of how they perceive their own art. If you look at audiences merely as customers, then all you want to do is to please them. I think it’s imperative to consider them as partners, stakeholders and to demand something of them. That mindset used to be there; somewhere it has gone away.” Hopefully, it will return, given some time.

(Akhila Krishnamurthy is a freelance journalist based in Chennai. She is also the editor of a bimonthly performing arts magazine, Aalaap)