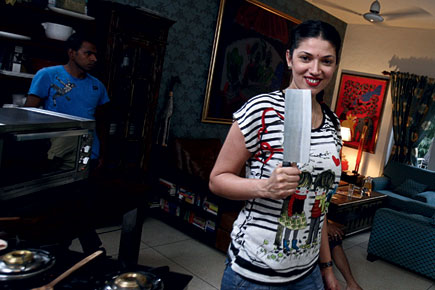 
Dressed in a crimson dress, she gracefully waltzes onto the screen, coaxing you to wake up and not smell the coffee but savour farm fresh veggies and “juicy, juicy fruits” and “bite your way into a brand new day”. Later that evening, you find her comfortably perched on a leather sofa set against the olive-green textured walls of her plush drawing room, petting her retriever Moses who playfully runs up to her while she daintily picks up her cup of tea and teasingly reveals all that she does with her girlfriends when they are over for tea. At dinner, she plays the perfect hostess, paying attention to fine details—fixing the folds of a napkin and giving a slight push to that one fork sticking out of line on an otherwise lavishly laid-out dinner table. Looking chic in a low-neck dress, she looks at you straight in the eye and invites you over for a dinner date, promising a sumptuous dessert.

That’s former ramp model Joey Matthew turning chef for a TV cookery show called Love Bites with Joey, to be aired later this month. After a career spanning more than 12 years as a ramp model for fashion weeks in India and London and being the face for several designers such as Manish Arora, Shantanu & Nikhil, Wendell Rodricks and Rajesh Pratap Singh, Joey now plans to open a fine-dining restaurant of her own in Delhi, and has donned the chef’s cap on TV to try out her own recipes and compile a menu for her proposed restaurant.

As the woman in red of the teasers for the show, which will air on NDTV Good Times,  she flirts with the camera and licks her fingers coyly, all the better to go with the droolworthy emphasis on “juicy, juicy fruits”  and “sumptuous dessert”, while trying to look like one herself. Pitch perfect, you would think, for a show suggestively called Love Bites…  She called it this, though, she straightfacedly says, because “the show is about cooking with love for the ones you love”

A Nigella Lawson in the making? Not quite, her friends would say. “She is a lot like Julia Child actually, and I hope she becomes one soon,” says fashion guru Prasad Bidapa, who co-authored a recipe book called Catwalk Cuisine with food expert and friend Parvana Boda Noorani eleven years ago. The book was a compilation of recipes by models like Mehr Jessia, Madhu Sapre, Milind Soman and Joey Matthew. “[Joey’s] cooking is legendary in fashion circles, and her food is quite stylish,” he adds, recalling times when Joey would fix a meal for friends and colleagues after a long day of rehearsals for fashion shows.

Grilled Haloumi served with fresh oranges and tangy vinaigrette, Mediterranean tagine with home-made bread, prawn cocktail and chocolate and tofu tart—the spread for her show does indicate her love of good food. Celebrity make-up artist Ambika Pillai unabashedly claims that she is a regular at Joey’s house for this reason. “I usually call her on my way home from work, and when I reach her place, there is something fancy like scallops or crackling pig waiting on the table. There is always good food, not a boring sandwich with a cup of coffee fixed in a hurry for a hungry friend,” says Pillai, who now keeps a tab on the dishes prepared by Joey for the show. If Joey’s show teasers keep viewers guessing what she and her friends do at their tea parties, Pillai divulges the details. “We eat, what else? I recently beat Malini (Ramani) and Noyonika’s (Chatterjee) daughter at polishing off an orange sponge cake that Joey had made for the last episode. It was divine. So was the Mediterranean tagine made for the episode before that,” she says, bursting into peels of laughter.

“This is my true calling—cooking and feeding people,” says Joey, standing six-feet tall behind a temporary kitchen platform set up in the middle of her living room for the shoot of the 26th and last episode of her show. She decided to have the show shot at her house—along a noisy and traffic-ridden lane in Panchsheel Park, an otherwise upmarket locality in south Delhi—to impart a “homely, comfortable feel to it”.

While she “beats the crap” out of a mound of dough for home-made focaccia bread with her perfectly manicured long fingers gleaming with bright red nail paint, Joey says that cooking has always been her saviour. A Malayalee from Kanjirapally in Kerala, she first dabbled in cooking when she moved to Delhi in the 90s to study law. “I love my fish and curry, and I would constantly phone up my mother for recipes,” she says. After a brief apprenticeship with Ram Jethmalani’s law firm, Joey realised that practising law really wasn’t her forte. She craved something experimental instead, something fun. With the advantage of a height that couldn’t go unnoticed, modelling came her way, and she has been a regular for over eight years now. Later, in 2008, she joined good friend Nikhil Mahajan to set up an audio solutions company to promote electronic music.

“I kept switching careers and each one has helped me grow,” she says, “I travelled and experimented with varied cultures, food and music only to realise that all I ever wanted to do was cook.” This she felt most acutely during her stint as a model for four  years in London. “I used to share an  apartment with other girls, and since we were all working, we had to divide our chores. I took the ‘hardest’ task, which was the easiest for me—cooking. Even after a hard day’s work, I would be happy to fix a meal for my flat-mates—I was cooking almost 13 meals a week. That won me friends in my flat-mates—and also my then boyfriend and now husband [advertising professional V Sunil],” she says with a wink.

Despite the busy schedule of her London stay, involving intense travel and long-hour shoots, Joey says she always avoided buying microwavable ready meals at superstores. “We’d work like slaves and the least we could do for ourselves was fix a decent meal, sit on the table and peacefully enjoy our food. And… if there’s a special occasion, I would go and celebrate it at a French restaurant over wine and a great dinner.”

Joey has stuck to continental food for her show “because I am a model”—but being a “true-blood Mallu”, as she calls herself, she couldn’t resist putting chicken and vegetable stew accompanied with appams on her menu. “It has been a favourite since I was a child, growing up in Kerala, visiting grandparents and playing with my cousins,” she says. At the risk of irking some potential viewers, Joey says that she absolutely detests north Indian food. “The food has no identity of its own. It either looks yellow or red, and the food is just drowned in spices. I have never cooked north Indian food and am not really interested,” she says. Her favourite cuisine, she says, is Japanese.

Even as she struggles with her Hindi—fumbling with terms like ‘kosa paani’  (lukewarm water), much to the amusement of the crew—and barks orders at her assistants to lift a tray and shove it in the oven, fetch a katori from the kitchen or “take that dog Moses away from the set for a while” with the imperium of a supermodel, as one is tempted to imagine, Joey says she expects her show to prove that pretty faces have brains too. “I have always fought that stereotype when people would come to me, as if in shock, and appreciate my cooking. I tell them, ‘Yes, I can cook well, thank you very much’.”

That’s how the show was conceived, says show director and NDTV Good Times programming head Monica Narula. With food shows like Highway On My Plate and Chal Le! with Aditya Bal, another model-turned-chef, the channel was looking at attracting more women and needed an appropriate host who would be distinct from the ever-smiling and benign Sanjeev Kapoor of Khana Khazana fame or the Masterchef series’ chefs, screaming and belittling participants with timers in their hands. At the time, Joey was taking lessons in Mediterranean cooking at a cooking school at Cafe Zaffiro in Zamrudpur, a sleepy village in south Delhi. This was around November last year.  “A friend of hers had recommended her and we shot a reel of her cooking in the classes. It was a do-it-yourself class and we loved the way she was working there,” says Narula. The channel later called her for an audition, and was shocked to see that she cooked a three-course meal for 15 people without much effort. Her dish of chicken wings with mushrooms was polished off within minutes, claims Narula.

“She is a looker, confident and graceful, and knows her stuff quite well. That’s what an upwardly mobile woman would aspire to be,” Narula says, resisting any comparisons with Nigella Lawson or Julia Child. Let’s keep it at that.