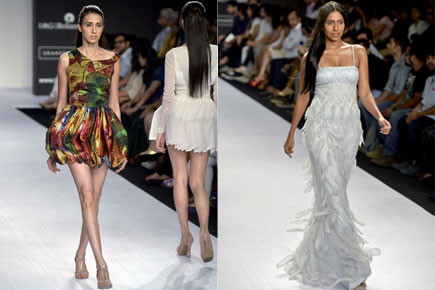 At the recently concluded Lakme Fashion Week, the one noticeable thing was how ‘normal’ sized models were, with broad shoulders and hips, ample bosoms and slightly curved waists. Model Alisia Raut, 34, says: “Internationally, female models are all size 2s. Their measurements have to be 32 chest, 24 waist and 35 hips. But in India, the average size of a model is anywhere between size 6 to size 10. I myself am size 6, and I have never wanted anything else. Even at size 6, I have a body of a teenager. But if I had to go abroad now, they would want me to reduce.”

For the unaware, a size 6 (by US standards) would be around 35 inches at the chest, 28 at the waist and 38 at the hips. A size 10 would be around 37 at the chest, 30 at the waist and 40 at the hips. Though their sizes ensure that Indian models fit into traditional wear with grace, they also mean that they can’t ever really walk international ramps. “Internationally, the standards are very strict,” Alisia says. “I know someone who was 35.5 at the hips, and they wanted her to be only 35 inches. She couldn’t model then. They are very strict with their specifications— if they want a blonde, they want a blonde; if they want a brunette, they want a brunette, and if they want a girl with shoulder length hair, that’s what it is. When you fill out forms internationally, you have to be very specific.”

Because of India’s liberal attitude towards sizes, many curvy Western models are now walking Indian ramps. Alisia laughs, “I feel like an alien in my own profession. They come here because we accept girls with curves. Also the shelf life of a model is much longer here. Internationally, they are done at 21. But in India, if you maintain yourself, you can keep going.”

Internationally, models who rule fashion runways are like Cara Delevingne, a size 2, with measurements 31-24-34. But there was once a time of the big supermodel. Cindy Crawford has said that back in her days, size 6 was average, like her contemporaries Christie Brinkley, Claudia Schiffer and Naomi Campbell. But then came the era of the waif and Kate Moss became the new ideal. Moss was once criticised for encouraging bulimia by saying “nothing tastes as good as skinny feels”.

According to a 2012 report in PLUS Model magazine, size 6 would be considered a plus size in the world of modelling. ‘Twenty years ago,’ it said, ‘the average fashion model weighed 8 per cent less than the average woman. Today, she weighs 23 per cent less.’ Also: ‘most runway models meet the Body Mass Index physical criteria for Anorexia.’

Model Deepti Gujral says she has always been a size 8, thanks to her Indian genes. “We will always be pear shaped women. There is no getting past it. We have small torsos and large hips. We won’t fit into size 2s and 4s ever. So modelling internationally is hard, though these days Indian models can try, as they are considered exotic. Indian designers need girls like us to showcase their clothes—especially Indian wear—so that they can show their market that any woman can wear what they are making.”

Indian ramps are a fry cry from their counterparts in Milan, Paris or New York, where extremely skinny girls show off garments of fashion houses such as Chanel. Androgyny is encouraged and most models have figures that could remind you of young boys in a concentration camp. In India, the women who walk fashion ramps have nearly regular bodies. But as fashion writer Shefalee Vasudev says, there is no Indian model who makes you go ‘wow’.

Vasudev feels Indian ramps simply accept what they get. “It’s true that no one looks starved. They are longer limbed, broader and even have larger feet. That’s just the way Indians are. But there is no one striking anymore—no one makes a mark.” She says the success rate of an Indian model internationally would depend on the trends at work in that market at that time. “There was once a time when the ‘exotic’ factor was ruling, and so models like Laxmi Menon did well. Then came a time when UK ramps became partial to plus size models. Indian models have to find a sub trend to fit into if they need to model abroad.”

Russian model Anastasia Kuznetsova, who has modelled for Max Azria, Louis Vuitton, Fendi and Valentino, and who walked for Lakme last season, has encouraging words to offer curvy Indian models. “I like it when a model is in good shape—not too thin, not too big,” she told IANS, “India can be a trendsetter for this in the international market.”

Candice Pinto, a well-known presence at Fashion Weeks, feels that it works the other way round: lots of foreigners land up in India looking for jobs. “There is so much work here—catalogues, ads, movies, ramps. They are working all the time.” Pinto, who fluctuates between size 6 and size 8, says that the newer girls are taller and thinner. “But many people are thin and not fit. You have to work really hard to maintain your figure. You can’t have fat jutting out from anywhere.” She feels that the possibility of an India model making it globally depends on a host of factors. “You should live in that country, you have to be taller and thinner. But India is a great to work—money is faster, and work is plenty.” She also says that even if Indian girls try looking Western, they can’t escape their Indian body type. “I can’t be skinnier, I just can’t. It’s just as well that Indian clothes look great on our bodies. We cater to this market well.”

At sizes 6 and 8, Indian models may be too large for the world, but given the market’s shape fixation, maybe India’s unwitting defiance is a good thing.