Amitabh Bachchan, who’s returning to television as Bigg Boss host, talks about the joys of the small screen and the Internet 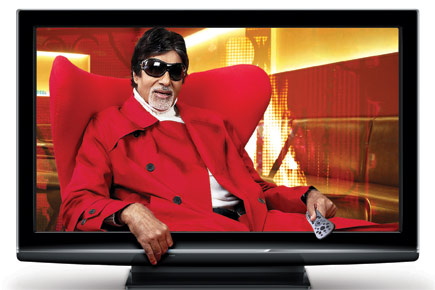 Amitabh Bachchan, who’s returning to television as the host of Bigg Boss, talks about the joys of the small screen and the Internet.


Towards the end of the 1990s, Amitabh Bachchan’s fortunes were at its lowest ebb. His venture Amitabh Bachchan Corp Ltd stared bankruptcy in the face. Worse, his films were flopping. India’s greatest superstar’s days appeared numbered. The public, who had worshipped him for over a quarter century, seemed to be tiring of him. And then Kaun Banega Crorepati happened. Both television and Amitabh’s fortunes changed irrevocably with the quiz show. A decade later now, he returns to the living room of India as the host of the reality show Bigg Boss. His pay cheque is rumoured to be Rs 1.5 crore per episode. Back in Mumbai after spending time in Singapore with friend Amar Singh who was recuperating from a kidney ailment, the Big B talked to us about the small screen, friendships, relationships and his blog which terrifies journalists.

Q KBC changed TV dynamics forever. You are now back as pop philosopher on Bigg Boss. What do you expect from the show?

I expect nothing more than being able to do the job assigned to me in as efficient a manner as possible. ‘Changing dynamics’ are for the producers of the show to assess. I am not aware what they mean. It will make me happy if the show does well. When the fruits of your labour taste good, it is a fulfilling experience.

Q If you had a choice, whom would you put inside the house from the film industry?

Q KBC prompted many film stars to follow suit. There was Govinda, Shah Rukh Khan and now, Salman Khan and Akshay Kumar. Whose hosting style do you like the most?

A Stars from film hosting shows on the small screen gave the viewing audience an opportunity to see and hear their favourites as they were in real life. They were not playing an assigned role written for them by someone else. People liked what they saw and applauded them. So for the viewing audience, each host was appealing, because they were able to see a facet of the actor hitherto unknown. Govinda, Shah Rukh, Salman, Akshay are known to me. I know what they are in real life away from the sets and camera, and they are all very appealing to me. Asking whose style of conducting a show I like, would be asking me to categorise their appeal to me. That would be wrong and unfair. They have all worked with me and have always shown me immense respect. Tell me, how does one give marks to respect?

Q You are an ardent follower of the international series, The West Wing. What do you like about it? Which character would you have liked to play in the show, if you were asked?

A I have liked the very concept of the format. Who would have imagined that the office of the President of the United States of America would be material for a TV serial! The whole excitement of being able to position yourself inside those hallowed portals is enough to keep one glued to the proceedings. Then as the events unfold, the speed with which incidents occur and are addressed, is an education in screenplay writing and performance acumen. Each situation, each performer is so perfectly crafted that it is impossible to find even a minuscule flaw. It’s absolutely brilliant! Just observe the camera movements on shots. It is incredible how they have operated them with such finesse and élan. The timings of the artists, the entries and exits, the lighting and the steady cam movements are done to perfection… And what of the artists! They are all simply brilliant. Each chosen and performing to such perfection that it is ompossible to imagine any other in their place. I would have been happy to play an ‘extra’, or ‘junior artist’ as we address them respectfully here in India, in the background, making my ‘passing shot’ on the odd cue, just so I would get an opportunity to watch and observe how magnificently each episode was recorded.

Q Which Indian show is your favourite?

A I like the debates and panel discussions and sports activities. On occasion, the History Channel and National Geographic are of great interest to me.

Q Do you stick out a whole show or are you a channel surfer and a remote addict?

A A remote addict. Though if you were to disturb a sporting event that I was watching, you’d be in serious trouble.

Q The media dreads your blog in case they are next on your flog list. What do you make of that?

A This is a most exaggerated assumption. The media dreads no one, and most certainly not someone of my insignificance. The media is the conscience of the nation. It would be a sad day for any nation if their conscience lived in fear. My blog is not a flog destination. It is a medium that allows me to talk to myself, with a few listening on. If I have found inaccuracy in the reported media, I correct it. If I have found merit in their writing, I have applauded it. The media has always been the one that asks the questions, and in doing so has the ability to put the one that gives the answers on the defensive. Observe Prabhu Chawla, Barkha Dutt, Rajdeep Sardesai, Prannoy Roy, Arnab Goswami, Deepak Chaurasia and a host of other most efficient interviewers on television. Their entire body language and demeanour is one of great authoritative superiority. Pan the camera now at their ‘meal for the day’ sitting opposite, and you shall find all of us quivering there like rats soaked in water, ready to be devoured. My blog gives me an opportunity to ask the questions and for the media to answer them. This is a reversal they have not faced and are therefore wary of it. But why should they? In a free and liberal society, I have equal right to question. And I now have a medium where I can be heard without the intrusion or the tacit permission of the Fourth Estate. If you are not afraid to question, be not afraid to answer too. For far too long, the celebrity on interview has almost pleaded with the interviewer ‘I hope you are going to write something good about me’. I will not hesitate to admit that there is a sense of poetic justice now, when I hear from some rather prominent journalists who come to interview when they say, ‘I hope you are not going to write about us in your blog, we’re very scared of what you will say!’ Let the media be the watchdog of society. We must welcome that. But who’s watching the dog? Or does the watchdog not deserve to be watched?

Q Bollywood’s a place of fickle friendships and pseudo relationships. But you have been with your friend Amar Singh for months while he was being treated in Singapore. For an extremely busy person, how do you juggle it all so well and make it seem so effortless?

A I do not know the meaning of ‘fickle friendships’ nor do I have any knowledge of what ‘pseudo relationships’ mean. Someone is either a friend or not a friend. What are fickle and pseudo doing there? There is no room for them. I also do not like the word ‘juggle’ that you have used. It conveys a manual physical act, deployed to manoeuvre a condition, which in my reckoning requires nothing more than heart. I do not see any reason for me to justify my desire to be with Amar Singhji. To me, he is not a friend, he is a member of my family. I was aware of his medical condition and was aware of the amount of time it would require for him to heal. I therefore finished all my work by end June and came to Singapore to be with him for as long it would take for him to get back. I have not taken on any work and I have no films on hand. Only recently, on seeing his progress and his possible discharge, have I taken on a TV programme that requires my involvement from October. I have been by his side for almost three months now and not moved out for a single day. You say I have made it ‘seem so effortless’. Dear lady, the day I shall have to make an effort in friendship, it will be the end of the relationship!

Q Abhishek and Aishwarya shot for the Oprah show recently. Will we see you and Jaya on her show sometime soon?