‘I really don’t know why things happened in this story’

If you are confused about Rockstar’s plot, then Imtiaz Ali is the wrong man to ask 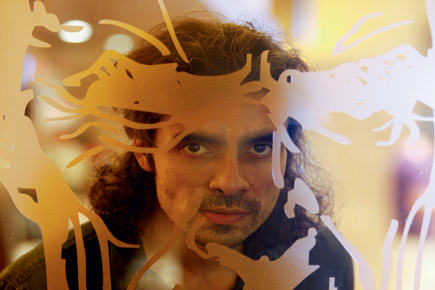 If you are confused about Rockstar’s plot, then Imtiaz Ali is the wrong man to ask


Sitting in a small cubicle on a window ledge with his long legs wrapped over the back of a chair, Imtiaz Ali, 40, could pass off as a rockstar. Faded blue jeans, a blue shirt with some tea stains, long wild hair, lean frame and that rakish face—all complemented by a slightly aloof, indifferent and dreamy attitude. It’s not then hard to imagine this man directing Rockstar. It was a movie touted to be about an ordinary man who becomes a rockstar, fuelled by the passion and pain that comes from being a spurned lover. It’s also not hard to swallow his saying, “I haven’t read a single review yet. I can’t say that the movie has done well because you would see through it. It takes years for a movie to become what it can. I just want to see how deep and how wide it spreads geographically. [Box office] Collections only matter to the extent that everyone who has put money in should get it back with some profit.”

Though Imtiaz may have not read a single review, critics have been busy. ‘The content of the film makes a disjointed transition that meanders between the life of a ‘rockstar’ and his love story, and writer-director Imtiaz fails to strike a balance and seek a convincing equilibrium between the two’, goes one review. Another says, ‘From its start, to the way it progresses, you can tell, the film’s been through various stages of editing and several second thoughts’. Micro-blogging sites have been full of opinion too: ‘The two ‘R’s are the only good things about Rockstar—Ranbir and Rahman, it’s the rest that’s the problem’; ‘An Indian rockstar: what a joke’.

Imtiaz takes the criticism with a steely glare and then a smile. “The best thing about this movie is that the reactions have been very personal. There is no mandate as yet—I am sure one will emerge, but after a while I feel. The opinion is so divided and so conflicting that it makes me feel good.”

There have been whispers of his taking the commercial route with this movie—and with Ranbir at the helm, a big movie was the order of the day— instead of the love story set in a middle-class milieu that Imtiaz has got praise for in the past, like Socha Na Tha and Jab We Met. But he seems amused by this suggestion. “Far too many people have told me that this movie is too risky. I haven’t tried any tricks with this movie—no background music at the right time or jokes cracked at opportune times. People have actually told me, ‘Don’t go back into the commercial zone after this as you have come a long way’.”

But for someone who saw the movie, a few flaws seem glaring. After the initial half hour, Ranbir’s character loses all interest in the music, and his transformation into a rockstar is hardly mapped. As for the love story, that too seems a bit half-hearted. It might well be a puzzle put together wrong. Imtiaz hears the criticism out, and then looks thoughtful. And just shrugs, “I have got completely opposite reactions from other people. They have asked me, ‘Why is there so much music in the film?’ But my point is that the film is also in the same space as Ranbir’s character, who is trying to belong somewhere. It doesn’t know who it is. There is no easy answer to this. But I don’t follow the diktats of any genre. I didn’t know that if it’s a love story, you make it like this, and if it’s a biopic, you make it like that. I just feel that there is this story, and if you want to invest money in it, please do it.” He must have noticed the perplexed look on our faces, because then he says, “I could think of an intelligent answer to give you, but I really don’t know why things happened in this story. It’s just how it happened.”

Though many people have pointed out flaws in the execution of the movie, the crowds seem to be trooping in to watch Ranbir trying to “feel pain to be an artist”. “I don’t necessarily think that’s true—that you need pain to succeed. But I think you need to get your feet dirty and learn through experience. Even I felt too ‘ordinary’ during college times and wasn’t sure where that would take me.” But the Delhi boy made a career of making movies of ordinary middle-class people, and his characters have always been deeply rooted in reality. “My stories are always about what I can see and what I understand. But I don’t know what will happen next. I am not thinking about who Imtiaz Ali is and what he is supposed to make—like love stories. I just want to tell a good story.”

Ask him about his lead actors, and his response is candid, “If people like the movie, it could just be only because of Ranbir. We have always known he was a good actor. I love him. As for Nargis, I am amazed at how well she has acted. Actresses like her will take time to be accepted. I know that she has what it takes. But [hers] is a face that does its own thing, and people are like that. I was never interested in a perfect face. When they cry, their face becomes funny. I just want to tell her that she shouldn’t try and become a part of the other girls.”

Imtiaz’s easy nonchalance could be interpreted as arrogance, but it could also just be his Zen-like self adopting the Que Sera Sera trick. As we are leaving, he chats with a friend over the phone. “Why would someone want my autograph? Maybe I should now start eating Manikchand—Bade log, badi pasand…” he laughs.