Future of the Ghost Movie

Tulsi Ramsay, the father of Indian ghost dramas, explains the rules of the game 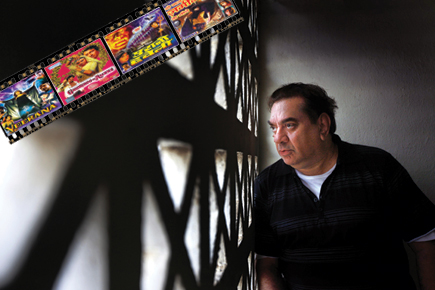 Tulsi Ramsay, the father of Indian ghost dramas, explains the rules of the game


The father of modern Indian horror films, Tulsi Ramsay, whose last movie contained a shrieking corpse blowing up a van’s headlamps, tyres, the van itself, and then the driver’s head, said one afternoon that he wanted to try something different. Like a love story. He then pulled out a carton of his movies. The cover art on every disc had four fixed things: a serious man, a horrified woman, a villain and a monster. “I need to keep food in my kitchen,” Ramsay said. “Why else am I shooting in graveyards? I too want to shoot in Venice with pretty girls and pretty boys.”

Since the Ramsay brothers became relics, Ram Gopal Varma stepped up, saying the brothers inspired him. Specifically, Do Gaz Zameen Ke Neeche, a cult classic. So Varma made Bhoot, Darna Zaroori Hai and Agyaat, and produced Darna Mana Hai and Vastu Shastra. Most of them did nothing for Ramsay. He shrugged and dithered when asked if the movies scared him. “Theek hai. I’ve made so many serials. What will I like? I’ve made over 400 episodes. Darna Mana Hai was time-pass. You can’t watch it again and again.”

“Darna Mana Hai was a serial, not a movie. He is out to make money. Hammer it out, make money. Make six crores out of two. He’s doing it as a business. That’s not good. He doesn’t make it from the heart, as he used to. But then why am I saying that about him? I do it myself.” Ramsay considered the matter for a moment and smiled, as if to say, ‘We’re all slaves to this.’

The seven Ramsay brothers were thrown into the film world when their father decided he was better off producing movies using family talent instead of unionised workers. None of them were adept at what they ended up doing: direction, production, editing, make-up. At the time of the interview, they had racked up over 30 movies.

Ramsay remembered visiting Varma three years ago. His Versova office was beside Ramsay’s home. “He offered me chai, and said he liked my movie,” Ramsay said. “But then a man has to be polite to his visitors.” Perhaps it rankled that Varma told him they would work on a movie together, but nothing happened. “He had problems after that. With his Sholay remake.”

Radio broadcasts in the 1970s advised midnight listeners to shut their doors because the brothers had a new release. In the 1990s, they produced horror for Zee Television. In between, no theme was left untouched, no girl left unpossessed. I asked what he thought of Agyaat. “I haven’t seen it, but I’ve heard about it, frankly,” he said. “I got very bad reports, so I wasn’t enthusiastic about it. But there was no story. It was shot in a jungle during the day. Evil had no form. Nothing.”

In Ramsay’s view, evil didn’t need a form. Evil only needed timely backup from a good story. Agyaat’s premise left him cold. “Six people went into the jungle. Did they do anything? Are they involved with the evil? So why is the evil killing them? Because they’re in a jungle? No story. All gimmicks. You have to have done something wrong—you kill someone. There should be something after you because you’ve done something wrong. Otherwise there’s no horror. There’s nothing satisfying.”

The set-up was everything for Ramsay. An innocent life shattered, followed by supernatural retribution. Each villain had to meet a messier fate than the last. He didn’t think much of Hollywood either, apart from Omen. “In Hollywood, horror films have no stories. Hardly two to three movies have stories. What story did Dracula have? Woh khoon choosta hai aur achchi-achchi ladki chahiye (he sucks blood and wants pretty girls)… If he is exposed to sunlight, he dies.”

Discussing the rules for vampires in Dracula, he thought about the guidelines for ghosts and ghouls in his movies. “We are not making a Dracula movie. We are making a horror movie. A spirit enters a girl. She could be in Bombay, and she could go to college, because externally she’s the same. But inside, she’s possessed. So the evil should come out. She becomes violent. She murders people. My Veerana was like that. Each story should have its own rules, and the rules should be accepted by audiences. You cannot say she is possessed and she can’t go out during the day.”

Even with their obeisance to the demands of the script, Ramsay’s rules were fairly straightforward. Few hauntings took place in daylight. They happened in closed spaces, or places where bodies were common—say, a morgue or graveyard. Ramsay believed that people reacted to particular triggers. Daylight was not one of them.

“Yeah, I could make one [a daytime horror film], but it wouldn’t be effective. Look, when do you get afraid? Night, no? When there is lightning, do children not shut their windows? When a dog barks or a cat jumps at you, is it not scary? If you set a film in the day, you can’t have all this. You can’t have the barking dog, or rain, or a storm. What effect will rain have? It’ll be upside down. It will look like suhaana safar. It will look beautiful. That’s what atmosphere is: night, cats, dogs, rain, weird sounds. Where is the horror in the daytime? At night, you can go to a graveyard. You can have owls. You can make noises with the door.”

Did he believe in spirits? Ramsay denied it at first, but then suggested that, like with God, ghosts were unseen but probably existed. “You’ve heard dogs barking at night, right? They have smelt evil on the roads. Sometimes, in villages, a dog sees something and starts barking. He barks so violently that the villagers are shaken. What has the dog seen? He’s not hungry. He’s not mad. It’s that he senses evil entering the village.” He knew what made for a good horror film. “You should have a proper subject that touches your heart. Look at Omen. Evil wants to come and rule the world. The woman tells her husband that there’s something wrong with their child. They go to the zoo and monkeys react to the child.”

For Ramsay, atmosphere was everything. “In Do Gaz… big jungle, watery roads, rain, a gate opens—we shot it at the Governor’s bungalow in Mahabaleshwar. If you go there at night you’d be so frightened. At night, we would see the swing move by itself, as if someone was sitting on it. You got that kind of feeling. So atmosphere counts. You can’t make a horror movie in a multiplex. Imagine a girl coming across a girl at a multiplex. Won’t work. So there should be lightening, rain, wind, a girl running to her car, a branch snapping, she sees a bungalow, she goes inside. That’s horror, no?”