From the Horse’s Mouth

The Kala Ghoda fest is supposedly about nine days of ‘cultural’ activity. But it’s really more a street fair. 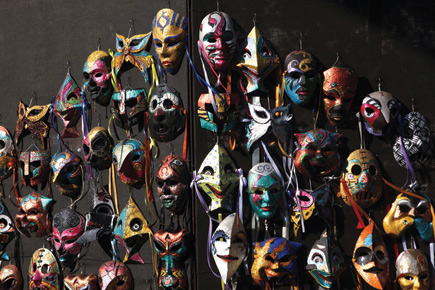 
In Kerala, a piece of narrow rectangular land is sometimes described as a loin cloth or konakam. Mumbai, if you bend the rules a little, is like a loin cloth. After spending a while there, it occurred to me that the street at the heart of the Kala Ghoda fest is also a loin cloth. Within which, there was an amphitheatre, a number of stalls selling stuff I had neither any need for nor would ever want, exhibitions of Photoshopped photographs, tables selling food and to give the appearance of a food court a few chairs and tables, and assorted other presences.

The Kala Ghoda Arts Festival first happened in 1999, hosted by an association that envisions the place as an art district. It spans nine days and is a medley of art exhibitions, literary and music events, movie screenings and plays and, as a category misfit, children’s events. For a city starved of cultural events, it’s even successful, but it’s still more street fair than art fest. Normally at the venue, there is just one horse, a black regal statue on top of a platform at the parking lot (this was where the loin cloth began), which glints silver along its ebony curves in the afternoon sun. When I went there on the penultimate day of the fest, keeping the horse company were two elephants, a rhinoceros, an antelope, a lion, a tiger, a gorilla, a deer, a monkey, a giraffe—life-size replicas all. A little kid, about three and in a pink frilly top, hung on to the back of the rhinoceros with incomprehension while her mother simultaneously told her to look at the camera and her father to click the photo. There was not an iota of doubt who gave the orders in that house. The kid’s relief was shortlived on being unfastened from the rhinoceros. The mother plonked her on the deer and told the father to start shooting. The kid looked into the deer’s left ear, found nothing of interest and went back to figuring out what she was doing up there. She journeyed on, from deer on to gorilla’s arms, to tiger’s rump, finally losing patience at the elephant’s legs, and then went running in circles beating her hands in the air with unknown glee.

I made my way into a small crowd and saw a man hold a boy’s hands over a revolving wheel and making a little pot from a clay mound in it. There was a board nearby that said it cost Rs 50 for a father to see his son be a potter for a minute. A never-ending line of children waited to dirty their hands. Nearby, a table was selling little clay Ganesha idols for Rs 50. It had no takers. It was a lesson in entrepreneurship—an experience sells more than a product.

Nearby, of all the useless lucky draws in the world, I saw one that would have been on top of the list. A board promised a kayak to anyone who filled in their name on a piece of paper and dropped it into a glass bowl. There is a sea somewhere along Mumbai, but I really couldn’t see anyone putting a kayak in their one bedroom-hall-kitchen homes. Or lugging it on the local train for an outing with the ocean wind. Then there was a black screen on which hung an array of multi-coloured masks. I was undecided whether this was a shop or an art installation. My guess was the latter. I was wrong. The salesman told me each of those masks cost Rs 850.

There was an interesting art installation, though. It was on the footpath. There was a bunch of hanging cages. One had a plant, another electronic gadgets, another a globe and a fourth, more interestingly, condoms with little globes in them. Two days ago, I had seen a kid peer curiously at the condoms. “Grow more trees,” said his mother, noticing his interest in matters slightly embarrassing to explain, pointing out the cage with the plant in it. He half listened and continued gaping. “Grow more trees,” she said again. And then giving up the fight, held him by his hand and moved on.

It was evening and the crowds were beginning to gather. I passed the amphitheatre, where young boys and girls dressed in black were rehearsing a dance routine, and saw a palmist. I decided to get my hands read. He told me to keep Rs 100 on the table and then took a lens and looked at my lines. He told me I would live for 72 years but between the ages of 55 and 60, there would be trouble. I tried a trick question, asking him about non-existent health mproblems, and he, seeing an opening, volunteered to fix it, for Rs 1,600. I considered the offer and suddenly the power equation changed. Whereas earlier I was the sorry troubled supplicant, now he became a salesman making a pitch. “Things that have to be done in time have to be done in time. If you delay it, even Rs 10,000 won’t help you,” he said. I asked him for his visiting card. He made a face and gave it to me.

I got out of the street and walked left on the main road towards Town Hall. On the street outside it, a stage had been set up and the Symphony Orchestra of India was rehearsing with their violins and cellos. I sat on the steps of the Asiatic Library and watched the organisers separate space with dividers. I mulled a little over how someone can take over public space for a public function and then have a special zone for friends and family. The symphony began. It was evening. It was cool. The conductor was just like they show in the movies. He sometimes thrust the baton in and out like a fencer, he made slow pelvic rolls and sometimes he spread his arms wide like Shah Rukh Khan. The music was fine but they had renditions of Vande mataram and Saare jahan se achcha, which was a gimmick. But it sounded good.

I returned to the Kala Ghoda street by late evening. At the amphitheatre, a group was dancing like Michael Jackson. It was crowded. I couldn’t see a thing. I realised that all those around me couldn’t see a thing, but we were all looking anyway. Since that was a silly thing to do, I walked out and went into the David Sassoon Library garden, where there was always something interesting on. Some nights ago, there was a poetry reading by a woman, who we shall not name. She started off by saying that having thought of the occasion, she did not want to inflict any sadness and, therefore, would not recite any of her sad poems. And then she began. But she did not. She spoke about how she’s a singer too and started writing at the insistence of a producer. She then began. But she did not. And went on to talk about surnames. And then she began, announced the name of the poem she was about to recite. Except that she did not begin. She spoke about being particular about naming her poems. And then she began. And began. Her first poem was about sitting and watching shadows and squirrels. She topped that with a poem about ants talking, with a small footnote explaining these are not ants but people talking. Which was just as well because no one would have figured that out. And so on in this vein. It was the bravest blinkered performance I had ever seen.

And then one night there was Shabana Azmi reading from her mother Shaukat Azmi’s memoirs of her husband Kaifi Azmi. They invited questions and a woman got up and talked about babysitting Shabana. She was the daughter of Sardar Jaffrey, the Urdu poet, who was part of the commune in Mumbai where Kaifi and other communist poets had lived. Shabana called her on stage and there was a grand hugging session. If I were more cynical, I’d have wondered why it needed a public event for them to meet.

But that Saturday, by the time I arrived, the poetry session was over. It disappointed me. They are always interesting, these poetry readings. Last year, a woman had read about two dogs speaking in Iraq. But I hung on and heard a little bit on graphic storytelling. It bored me, so I walked out and went home.