The CEO of the largest fringe festival in the world on the fun of performing spontaneously, unbridled by definition, unworried by structure 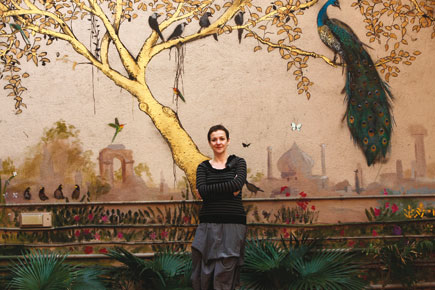 The CEO of the largest fringe festival in the world on the fun of performing spontaneously, unbridled by definition, unworried by structure


You hear stories about Kath Mainland long before you actually meet her. Like how she threw Hollywood actor Christian Slater (Interview with the Vampire) out of the Assembly Room’s bar the year that he was acting in the play One Flew Over the Cuckoo’s Nest.

“It was his birthday and he was enjoying himself a little bit too much. I didn’t throw him out of the bar, I threw him out from behind the bar… he chose to leave,” she had famously told The Scotsman—a Scottish daily.

When you finally meet her, you  feel an immense sense of calm. It is as if the fidgety, restless energies around you have settled down. Watch her handle the throngs of curious audience members at the British Council with supreme confidence, and it becomes evident why she is known as the lady ‘who gets the job done’. But there are various facets to Kath. She can be quiet and shy, and suddenly double up with laughter at something you say. But no matter what, she is always focused on the job at hand—be it handling questions about the Edinburgh Fringe, of which she is the chief executive officer, or giving interviews to the media.

Mainland was in Delhi to forge artistic partnerships that will help in profiling India’s unique culture on stage at Edinburgh. “We have been presented with a lifetime opportunity with London hosting the Olympics in 2012 and Glasgow organising the Commonwealth Games in 2014. These two events are coinciding with the Edinburgh Festivals and we want to turn the world’s attention towards wonderful new and emerging talent from across the globe,” she elaborates. Imagine 20,000 unaccredited press members, hundreds of talent agents, over 2,400 artiste groups from across the world and millions of tourists witnessing a panorama of new-age acts from India across 259 venues in a matter of 4 weeks. The British government has already signed an MoU with India, and it will have a major presence at the Edinburgh festivals from 2012 to 2014.

The concept of a fringe fest is still quite novel in India, but people are slowly warming up to the non-programmed festival format. The fact that you don’t need to label your performance as a ‘theatre sequence’ or ‘music performance’ or ‘dance gig’ comes as a relief to artists. You can perform anything—it could be across art forms, undefined, or a new art form altogether. “There are no guidelines, no selection criteria. Anyone who wants to participate can. Only, you need to believe it in your heart that your production is good,” says Mainland.

The Edinburgh Fringe, being the largest such festival, has always been considered a Mecca for artists. But 2008-09 was a troubled year for the event. Caught in the thick of recession, sales were down by 10 per cent. The constant rain didn’t help matters either. That was when Mainland took over as chief executive of the Fringe and turned it around. The first thing she did was work closely with partners to create a state-of-the-art box office system. And her efforts bore fruit; ticket sales went up by at least 20 per cent that year and the festival entered a new era. Mainland was promptly, and aptly, christened ‘The First Lady of Fringe’.

She suddenly bursts forth with a cherubic enthusiasm while describing the eclectic atmosphere in Edinburgh during the festival. “It’s like a carnival. If you walk down the High Street, you will find mini performances happening all over the place. There is music and dance everywhere and people are just so happy,” grins Mainland.

There are impromptu performances happening in restaurants, pubs and even washrooms! “A lot of people ask me what is the one thing we are looking for in performances or what kind of shows we want to see. And I always say that leave the youth alone! Let them form connections on their own. It is interesting when you see things develop independently,” she says. And it truly is fascinating when you see trends emerge of their own volition. There was this one year when every performance at the Fringe started with people taking their clothes off! And then another year, most performances dealt with sexual identity. Last year, the theme that dominated the festival was human trafficking. “It wasn’t as if all the directors and artistes congregated at one place and decided that ‘let this be the theme of the festival’. These are trends that emerged on their own,” says Mainland.

What she wants to do is create a democratic platform that is accessible to young people. It is a space that allows them to take risks and be experimental. “I always encourage artistes to simply visit the festival once as an audience member. Just check out the production formats, operation costs, and performance styles. This information will help you plan your production the next year,” she says. A lot of artistes get the shock of their lives when they see productions being set up in 15 minutes flat; even bigger and more elaborate acts have a turnaround time of 10-12 minutes. This can’t be helped, considering there are seven different shows of seven different artistes at each venue. The first show starts at 10 am and the last one ends at 2 at night. That’s why going on a reconnaissance mission the first year helps understand the dynamics of the fest.

Though it is expensive to travel to the festival—considering you have to pay for your airfare, accommodation and registration fees—Mainland believes that it is important for artistes to keep coming back with their acts. For instance, when Indian Ocean first performed in 2002, only seven people attended their concert. But they kept coming back, and soon they became a popular act at Edinburgh.

The band Mrigya got a great response when it came to Fringe in 2001-02. Kathak dancer Aditi Mangaldas, theatre personalities Lilette and Lushin Dubey and Roysten Abel were also received well.  “One great reason to take part is to simply develop as an artiste. You see yourself vis-à-vis your contemporaries; collaborate; network. But most importantly, you need to enjoy your craft, have fun while you work, and what better place than this festival?” signs off the queen of fringe.