First, You Print the Shot Glass

At a Bangalore art gallery, a printer spins 3D objects out of bright green plastic while an unopened bottle of vodka stands by 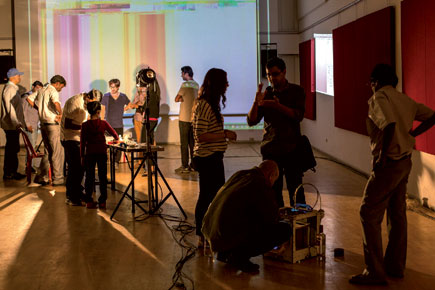 At a Bangalore art gallery, a printer spins 3D objects out of bright green plastic while an unopened bottle of vodka stands by

I am invited to a party called ‘3D Print Party Flux Assemble Open-Hardware Kathe UM%hack*’. I don’t understand what that means, though I suppose I can tell you what 3D printing is. A meeting with artist Fabian Hesse, the party’s host, has given me an understanding of his line of practice, but I still can’t pronounce the whole name of this party. Let’s stick to calling it the 3D print party.

Fabian Hesse is a visual artist from Germany, and is in Bangalore as a Goethe bangaloREsident@Jaaga, an artist-in-residence programme that the Goethe Institut organises in the city in association with local cultural bodies and arts organisations. His interest lies chiefly in the many layers of the Web world and his works explore the fundamental changes that occur in the world and society through information technology and ‘digitalisation’. One of the ways Hesse engages with the process of this ‘digitalisation’ is through 3D printing, using freely available open source software and hardware.

At the 3D print party in Bangalore’s Max Mueller Bhavan on a light winter evening, the room is illuminated by the shivering lines and patterns on a laptop screen, magnified and projected onto a wall. There is tea in a steel can, and some biscuits. All the action is around the printer on the floor, behind which surreptitiously sits a tall bottle of vodka, waiting to become part of a ritual traditional among 3D print artists. A work week is only just ending outside the glass windows of the building and the party indoors won’t heat up for a few hours yet. A few people trickle in and the art talk begins.

The printer, the party’s reason for being, sits in the middle of the room. It is a square box, open on all sides. There is a lot going on with it. A little screen tells you how much printing has been done already, what the temperature is like and other numbers. The nozzle of the machine is whirring back and forth, outlining a form in green—the only colour Hesse has added to the printer. Before the event, he had invited people to send in images of things they’d like to have printed; what’s being printed now, he tells me, is a sort of mini-bust, based on a photograph of a friend’s head and shoulders.

The way it works is that Hesse takes an image, uses open source software to convert it into a format printable in 3D, puts it on an SD card and feeds it to the printer, which then prints a figure based on the image. Even a small file takes hours to print; Hesse’s own works take between nine and forty-something hours each.

The droning noise of the printer at work silences the conversations of those who mill around it, peering in. There is something about the monotony and repetitive movement of the nozzle that, like a micro-trance, holds your attention for several minutes—until you have taken a photo on your camera phone, until someone you know walks in, until your back hurts from bending over.

Walking by the printer every few minutes to check on its progress, I overhear the conversation: “I can’t get my head around these things. I am too old. I am fascinated by it but I can’t understand it,” says an observer.

“Oh, neither can I,” replies another, “I just like what it is doing.”

Hesse is explaining to someone that the printer, which he has brought with him from Germany, costs about €1,200. Across a long table are pieces of plastic, metal, nuts and bolts and tape that will make another such printer. With the help of some technical people from Electronic City, Bangalore, Hesse will assemble the second 3D printer right here. He hopes it will work; he and the people from Electronic City have reworked the nozzle a little.

Just then, the machine halts. Hesse doesn’t know why. The project in progress can’t be finished. Once the printer stops, it can’t begin again mid-project—the file would have to be printed again from scratch. Hesse uses a spatula to remove the half-formed figure from the surface of the printer. In its place, he loads an image of an iPhone cover. The girl who sent it in is mighty excited. The printer is restarted. The pattern printing now is intricate and the nozzle moves fast. As the cover begins to take shape, more people mill around the machine, including a man and his little daughter. While he seems delighted at the technological marvel, she doesn’t look too impressed.

An artist standing by is paying attention to the percentage of the printing already done, looking at the little monitor where the numbers are on display. It is at 12 per cent. Hesse is telling someone that he uses polylactic acid (PLA), a kind of bio-degradable plastic that comes in several colours—transparent too. Today’s shade is green.

“What is with the boxer shorts?” I ask, referring to a pair of printed boxers hanging from a hook against a red surface on one wall in the gallery.

Hesse explains that the shorts, printed with the alphabet—a jumble of letters layered over each other—are intended as “a nod to data security patterns that prevent transparency and by turn, data theft. Boxer shorts are a piece of private clothing; very few people see [them]. So this explores the idea of whether to have transparency or not. In this museum, institution-like set up, this was like a joke to me.”

Someone in the background is talking about being an artist, another about not being one but being in awe of art. Mutual acquaintances are being invoked after new introductions. Hesse is going back and forth between two laptops, saving files and tweaking things in each. On one sits a small white rabbit figurine, printed in 3D. A few other oddly-shaped 3D objects are in evidence, standing out in green against the red boards that cover the walls.

It isn’t time yet for the vodka bottle to be put to use.

The day before the party, I meet Hesse at the cozy Courtyard Café at Jaaga, a space which describes itself as an ‘evolving community sculpture’, a sort of creative common ground that is hosting him. He speaks about how he started out as a graffiti artist in his teens. In small town Germany, he and friends would stay out nights to “make the city ours”. That got him in trouble, but not before putting him on a path of art practice. He emphasises that he cannot make high end decorative pieces of art.

Through his practice and his work with Fablab, an artist collective in Germany where members pool together resources and exchange know-how, Hesse explores the role of data as a new currency. The materiality of data and its physical attributes are what he seeks to combine and highlight through his 3D pieces. He once got hold of passwords of hacked Twitter accounts and printed them out in 3D. That work and many of his others are hard to transport around the world when he travels—the threads are fragile—but his emails go around the world several times in a matter of seconds. The irony of this, the contrast between his work and the ideas that he conveys through it, isn’t lost on Hesse.

He is a 1980s child; we spend some time talking of those days, of growing up without email and the web. Hesse doesn’t allow himself nostalgia of a simpler era, though: “You make the best of what you have.” For all his interest in the internet and how it blurs the lines between the virtual and real, he says he was left speechless by the NSA spying scandal in the US. “There was a moment when the internet was seen as Utopia. But it’s no longer ‘our internet’ anymore, and that makes me sad. I am an advocate of freedom of expression.”

The conversation drifts to Facebook and email—the virtual crowding of real lives. He says he finds himself exercising reserve in his emails these days, after the spying scandal broke. “Not that I have anything to hide, but still.” At the party the next evening, his Twitter password work lies in a corner. Hesse told me the night before that it is customary among artists who work with 3D printing to print a small glass and drink a shot of vodka from it. That is the ‘party’ part of the evening. The ritual is observed in due course. Printing happens too.