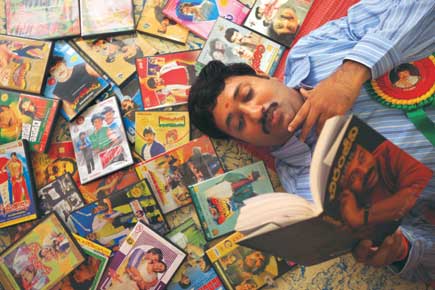 
C Srikant Kumar is 33 and a bachelor. He hopes to marry at a simple ceremony soon. But for that to happen, the politics of Andhra Pradesh must go through a phase of complex churning, a phase that (presumably to his relief) has already begun. It started in August last year. Kumar, one among millions of crazy Chiranjeevi fans, has refused to get married until the matinee idol becomes the chief minister of Andhra Pradesh.

Kumar, who sports a Chiranjeevi moustache and hairdo, has been a fan since he was five. “I watched him in Aarami Mantalu, a 25-year-old club dancer who hunts out his sister’s killers and puts them to death. I watched the film again and again. My uncle was the manager and operator of the talkies where it played,” Kumar recalls. By the time the film reels left Pancharatna Talkies in his hometown of Madanpalli, Kumar was committed to the Chiranjeevi cause. The year was 1980, and the film was the Telugu star’s first as a hero after he had started off with a negative role in 1977.

Kumar now lives in his first-floor, one-room rented accommodation in Khairatabad. He has Chiranjeevi memorabilia adorning the walls, pinned to the curtains and stacked on his bed. In the last nine years, he has written three books on the star’s films, personality and place in Telugu cinema. He owns all 125 DVDs of Chiranjeevi’s films released in India, and can cite the dates of release and such details as producer, director, scriptwriter and co-actors from memory.

The first big Chiranjeevi hit, he recounts, was Khaidi, released in 1983, based on Sylvester Stallone’s First Blood. Soon after, Kumar found that he was no longer one among a handful. The star had begun attracting a substantial following. This crowd kept growing with every subsequent hit. Khaidi was shot in the district of Tirupati, home to India’s most famous Venkateshwara temple. Filing his nomination papers for that very Assembly seat recently, Chiranjeevi spoke of his special connection with the place, saying it’s only fair that his political journey also begin here.

By 1992, Chiranjeevi was a cult figure. When his film Karana Mugudu reached its 100-day mark in theatres, more than 300,000 fans turned up for the celebration. The following year, Chiranjeevi played a politician in Muta Mesthri, and clamour began for his entry into politics. It only grew stronger over the years.

According to Kumar, Chiranjeevi’s appeal lies in being Everyman. “He is not six feet tall and he is not overly handsome—he is just an ordinary middle-class man.” Fans identify with the roles he plays. From the unemployed young man named Gandhi, who works hard and makes money the good way, to the waiter who struggles to study and graduate college, he plays hero in the viewer’s own image, a hero who begins his struggle modestly, a hero who still manages to emerge larger than life on the big screen through a combination of grit and determination.

This identification with the star gave him a huge fan base. The demand that he adopts a political role has given this fan base shape as an organised network capable of mobilising support. Kumar himself left his cushy government job as a Telugu literature lecturer at the local college in Madanpalli, nine years ago, to join Chiranjeevi’s blood bank in Hyderabad as a volunteer.

The blood bank is just one among many that make up a vast network. There are innumerable fan associations and outfits that organise anything from blood donation camps and tree plantations to film functions. Every year on his birthday, 22 August, fans across the state perform a religious ceremony and wear a garland of beads for three weeks.

“The thing about Chiranjeevi sahab’s fans is that there is healthy competition among us,” adds Kumar, “Each wants to outdo the other. How many times you watch a particular film is the measure of how big a fan you are. And if the film’s a flop, then you are an even bigger fan.”

Even so, the personal appeal is just part of the story. Until Chiranjeevi descended on the scene, Telugu cinema—just like the state’s politics—was dominated by privileged ‘castes’. Chiranjeevi is Telugu cinema’s first star from the so-called ‘backward classes’ (BCs), and people from his own caste—the Kapus—constitute nearly one-fourth of the state’s population. The fan-following cuts across the constituencies of the state’s two leading parties—the Congress and Telugu Desam Party (TDP)—and his fans, for better or worse, are more loyal than political followers are typically known to be.

These are the crowds that are pushing Chiranjeevi towards politics, and the politician in him has quickly grabbed the opportunity, giving tickets to 109 BC candidates for the ongoing Assembly election (alongside Lok Sabha). He has promised Rs 5,000 crore to the state’s BC welfare corporation if his party gains power.

There was already a precedent for the transition that Chiranjeevi has now made. “In the South, cinema carried forward the Dravida movement—the Dravidian quest for self respect,” says media sociologist Susmita Dasgupta. Now Chiranjeevi could well emerge at the forefront of a Kapu assertion of identity. His fan base, it seems, has dreamt of precisely this for years and years.

Of course, no such phenomenon is complete without the extreme expression of sentiments. In February last year, a 30-year-old AP Home Guards sepoy killed himself because he said ‘Chiru’ was taking just too long to broach politics. On 26 August 2008, Chiranjeevi finally launched his party. The numbers at the launch took even well-informed political observers in Andhra Pradesh by surprise. The massive crowd roared its approval as Chiru took the microphone and announced the party’s name: Praja Rajyam (People’s Rule). The slogan: ‘Social Justice.’ The launch day: Mother Teresa’s birthday. It was a dramatic moment by any reckoning.

Seasoned politicians from the Congress and TDP, though, are dismissive. Andhra politics, they say, is no Chiranjeevi film in which he is always the winner. This, they are clear, will not be a repeat of 1982, when the cine star NT Rama Rao swept the polls riding high on the chariot of ‘Andhra pride’. Yet, they are careful not to deny the Chiru effect—that his dramatic, starry entry has ended Andhra’s political bipolarity. It’s no longer the TDP versus Congress here. What’s more, as the ballot fragments and the threshold percentage of votes needed to win an election begins to decline, other political players start counting for more. In fact, the TDP has had to seek the support of others—namely, the Telangana Rashtra Samiti and Left—to form its new Grand Alliance, as it is called.

When Praja Rajyam General Secretary Parkala Prabhakar quit last week over differences with Chiranjeevi, the star-turned-politician brushed it aside as “internal differences within any party”, insisting it is “the people” (read fans) who will bring him to power. Chiranjeevi fans are known to be a passionate lot; the cine couple Rajsekhar and Jeevitha was attacked only because the former had the nerve to suggest that the megastar lacked the requisite maturity for politics. A fortnight after the party was launched, an 18-year-old fan, Chandru, killed himself at his house in Nizamabad just so that he could donate his eyes to the star’s eye bank.

But then again, a frenzied following need not always translate into the width of appeal that political success ultimately demands. Still, Andhra politics won’t be the same again.

“There were more than a million fans at the party’s launch and sahab’s rallies have been getting the same response,” claims Kumar. Of course, he has reason to exaggerate. After all, a marriage hangs in the balance.