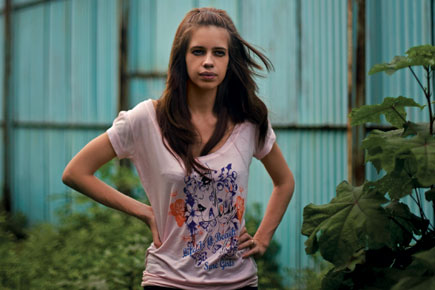 
She always stood out in the crowd, and for obvious reasons. But what Kalki Koechlin’s alabaster complexion and elfin-like features don’t tell you is that she was raised in a conservative Dravidian society. Much before Bollywood stereotyped her as a White Girl with Broken Hindi, Kalki’s objectification as someone who could be “approached” easily because of her skin colour started taking shape in her childhood years in Ooty, Tamil Nadu.

“I have had to deal with this, what do I call it, ‘stereotyping’, all my life. It’s just the same as a woman wearing a short skirt who is seen as a slut,” says the actress who achieved fame with Dev.D and even more with Zindagi Na Milegi Dobara.

Her earliest intimations of how her ‘colour’ made her different came as a schoolgirl. “Back home, my friends never made me feel that I had a different skin colour than theirs. Everyone used to invite me to their weddings. I talked the same language, ate the same food. Yet, every time I would be away from home, I felt that people were looking at me differently. Once, I was in Goa and nobody gave a damn who I was. It was as if I blended in among the British, French, Russians and Americans,” she says.

Her complexion was a genetic gift from her French parents, but a white skin in brown India comes bundled with a code of public perceptions that she would have been happier without. “Indian men look at a White girl with a strange attitude,” she says, “They consider such a woman to be of loose morals and [thus] ready to do more. It’s horrible to be looked at like that.”

It bothered her. So when an opportunity arose to explore the subject in cinema, the actress jumped at it. The result was That Girl in Yellow Boots. Released on 2 August, it’s a film about a White girl searching for her father in India that she scripted on the active prodding of her filmmaker husband, Anurag Kashyap.

The film draws heavily on her own memories and viewpoints. “I wrote the script more as scenes. It contains my own experiences at some places, but I still don’t think I have been through what the protagonist does in the film. It’s far worse,” she notes, adding that the opening scene at the Foreigner Regional Registration Office (FRRO) is extracted from an incident that actually happened to her. “Before I acquired my citizenship, I had to visit the FRRO, and the way these small government officers treat you is appalling— that scene shows the sense of authority they have.”

Kalki says that her early understanding of sexism aggravated by her skin colour led her to exercise extra caution, particularly in the presence of strangers. With friends, it was different: “All my friends were dark Tamilians, and being with them, I always thought of myself as brown. As a matter of fact, as kids we would stare at firangs without realising that I was one too.”

Mostly, the boot was on the other foot. Being singled out for male attention was a routine event. “Among the neighbourhood boys, there was a definite mentality of ogling, but I never felt harassed or exploited. They would look at me merely because I was White, as if I were an alien— they thought I was not from India,” she says. The constant “stares” she received, especially during her travels beyond her home state, turned her more and more “conscious” of herself. So much so that she sought the security of always being part of a group in public.

It was only at Hebron School, a multi- racial boarding school in Ootacamund, that she began to felt less antsy, and was allowed to be “herself”. “There were Chinese, Americans, Southeast Asians— practically students from all over the world. That exposed me to different cultures and helped me define my own culture. The only time I would be given those ‘looks’ was when I would converse with gardeners and cooks in Tamil. My teachers still remember me as a Tamil-speaking foreigner,” she smiles.

As a 10-year-old, a visit to her grandparents’ home in Strasbourg, France, gave her occasion to reflect on her real identity. “This was the first time I had stepped out of India, and I discovered nobody was looking at me, as if I was just one among them.” If anything, that trip loomed hauntingly in her consciousness long after she returned. “I didn’t know who I was—Indian or French. I kept thinking of who I am and why France was a totally different experience.”

In India, one needs be on guard all the time, with women under constant threat of molestation. “I learnt to look after myself,” Kalki says, glad that her family and husband have been so protective of her. “I still think South India is a lot safer,” she observes, adding that her worst experiences have occurred in Delhi. “I was in this travelling phase in my life when I was just 20, and wanted to visit the Taj Mahal, Rajasthan and other parts of North India. My friends and I were in Delhi, and every time I was left behind, I would get pinched and grabbed. We were travelling with big bags, and since we were students we were on a tight budget. So, we would commute by public transport. I was harassed on trains and buses and I hated every moment of that.”

Another day, on the streets of Delhi, she was swamped with requests for pictures. Some of these strangers had the audacity to “flirt” with her. “There was one guy who said, ‘Madam, can I have a picture with you?’ and then he started bothering me. Another asked me to share my phone number with him. But because I was guarded, I would talk back. So, they knew they were dealing with an Indian girl. An actual foreigner with no idea of India would be clueless in such a situation.”

On the contrary, she was treated like a princess in strife-torn Kashmir—by self-admission, her “best trip”. “Maybe because of my skin, I passed off as a local girl. Nobody bothered me, and the men were polite and nice.”

As she grew into a teenager, somewhere along the way, Kalki developed an internal defence mechanism, a thick-skin. She realised that a profession of acting would require her to be bold and tolerant. When she first arrived in Mumbai from Bangalore to work in theatre, however, she hadn’t dreamt that she would end up in Bollywood. “I have dedicated my life to acting. I saved money to be in theatre. I don’t think I ever thought of Bollywood as an option because my Hindi was terrible. I couldn’t speak a word in Hindi to save my life,” she says.

During her early years in Mumbai, she was content acting in plays. Later, some friends suggested she try out TV commercials as a model, since it would help her pay the rent and “get by”. That’s when she prepared a portfolio and went around from Yash Raj Studios to UTV, looking for advertising work. “There were times when I got fed up because some random director would offer me a hot item number—presumably meant for a firang extra.”

Dev.D, her first film, happened by chance. “When UTV called me for an audition, I said ‘No’ because I couldn’t speak Hindi. They insisted I do it in English. Ten minutes after I had left, they rang me to say that I had got the role.”

The film did well. Yet, she continued to face discrimination. “Initially, things weren’t exactly super pleasant. Dev.D was a slow hit, and until I began to get recognition, people had judged me for playing a bold character. They said, ‘Only these foreign girls can do such roles.’ It hurts to hear such things.”

Every time such stories were tossed around, her parents would get frightened. After all, they have always been concerned about her acting career and wished she hadn’t chosen this field. “When I first told them that I am going to an acting school, they panicked. They wanted me to take up a stable job. They have not always been happy with my career, but they have been supportive,” she says. Her mother still nurses a few apprehensions. “When she saw Shaitan, she got nervous about the characters taking drugs. She made me promise that I will stay clean and not let the film world corrupt me.”

Of late, Kalki sees a change in the attitude of Indian men towards foreign girls. “The world today is a global village, and the situation is changing in India. It’s easier travelling now. When I was in Bangalore, I would see these foreign girls mingling with Indians at infotech company offices. They were working and living together and making India their home. Now when I travel, it doesn’t look that bad. We are probably getting used to seeing White girls around us.”

She is not bitter about her experiences. In fact, she believes it shaped her and her understanding of life. “It has given me a new perspective. I have realised that people everywhere are the same, we have the same needs, and that people must never be separated by the way they look. The biggest lesson I learnt is to stop judging people.”

The colours and contours of cautionary tales