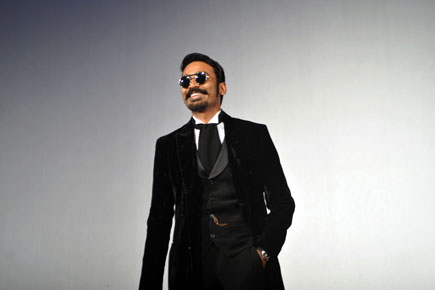 In his latest film Shamitabh, Dhanush plays an actor without a voice. “It is one of the toughest roles I’ve had to do,” says the Tamil star of his second Hindi film. “I chose Shamitabh after 33 scripts, and I got to work with Amitji. I couldn’t have asked for more.” Dressed in a crisp blue shirt and trousers, his hair neatly gelled and a beard that’s now his signature style, Dhanush seems a bit fidgety but tries hard to not let it show. “I’m not used to doing so many interviews. In Chennai we have one press conference, about four to five interviews, and it’s done,” he confesses as we sit down for a cup of filter coffee on the rooftop of director R Balki’s Khar office.

Apart from a lone bodyguard who keeps an unobtrusive watch on him, there’s little to tell that Dhanush is one of the biggest Southern stars of our generation. His humility is striking and in many ways refreshing. He chooses to measure his words and is not ashamed to admit that the only place he is equipped to ‘perform’ is in front of a movie camera. “I don’t know how to decorate my words. I don’t know how to present myself well. But I do my best to communicate what my director wants in my films. I am comfortable only in front of a movie camera and nowhere else,” he says of his reputation of being painfully shy.

The opposite of his character Kundan from Raanjhanaa (2013), that introduced him to a majority of India’s Hindi speaking audience. His performance as the hopelessly-in-love Banarasi boy had crowds rooting even for the ridiculous ways in which he woos a woman. Dhanush couldn’t speak or understand a word of Hindi when he signed that film about three years ago. “I told myself if there’s an art, it won’t have a language, and if there’s an emotion, it would be the same for every human being,” he says, “So I just followed my instincts.” He refuses to admit it, but Raanjhanaa was a gamble for Dhanush, who had to debut as an actor once again, 12 years after he did in south Indian cinema. “Many people told me that I won’t be accepted here the way I am in my hometown. They spoke about the North-South divide. Now I can tell them that people all across the world are accepting and appreciative of good work.” he adds.

Not one to be awed by Bollywood, Dhanush wants to experience it with his feet on the ground. “I don’t see much difference between working in films down south and here. As long as you’re doing your part right, you should have little to complain about.” It’s perhaps this lack of ego in his approach to his craft that separates him from most of his contemporaries, even in the South.

It was when young superstars like Vijay, Ajith and Vikram were ruling the roost in Tamil cinema that Dhanush, a skinny teenager who looked nothing like a conventional hero, made his first appearance on the big screen. It was 2002, the film was called Thulluvadho Illamai, and he played a troubled teenager who flees home with five other friends. Directed by his father Kasthuri Raja and written by brother Selvaraghavan, the film was a rage with youngsters. So too his next two films Kadhal Kondien (2003) and Puthukkottaielerenthu Saravanan (2004), and he had a surprise hat-trick to his credit. “When I started off, I wasn’t dreaming about a future. I was taking every day as it comes.”

“I was pushed into acting by my brother and father because they did not have a choice. They needed this film to work and they were stuck with me,” says Dhanush, who as a kid saw his father struggling to make ends meet for their family of six. “We’re two brothers and two sisters. We lived in one room in Chennai and we were used to one meal a day. Despite that, I was a very happy child. All that mattered was there was food to eat and friends to play with.”

In the 80s, his father Kasthuri Raja would work at a rice mill during the day and write stories at night. “As a man who came from the village to the city, my father had many stories to tell,” he says. “I was too young to remember, but I’m told that he would sell his stories for Rs 50 to people who’d then sell those to big filmmakers. Somehow a friend of his then introduced him to director Visu, whom he assisted for almost 14 years. My parents have been through a lot of hardships and sacrificed a lot to give me and my brother this platform.”

Dhanush was the rebel in the family. “I really hated going to school. I was a class topper but I just did not like to go to school. I remembered things very well. I hated control and in school all they would do was control you.” An athletic boy who’d take part in every sport from cricket to volleyball, cinema was the last thing on his mind—except for the man who every Tamil kid grew up watching. “My only influences in cinema were Rajinikanth and Bruce Lee. Rajinikanth was everything to us at that point. We’d all imitate his style of dressing up, smoking a cigarette after flipping it high in the air, wearing stolen sunglasses—all of it.”

Dhanush, who is married to Rajinikanth’s elder daughter Aishwarya, says that the fanboy in him seems to overtake any other relationship he shares with the superstar. “The first time I met him was in his farmhouse, where he had invited me to appreciate my work in my second film,” says Dhanush. “If people compare me with him, I consider it a huge honour. Rajinikanth is the name. I really don’t mind seeing my name next to his.”

His trajectory resembles his father- in law’s in some ways. After Rajinikanth, there have been few young actors in Tamil cinema who appeal to the masses as one of their own. Dhanush cracked the code of being the common man’s hero. Anand Rai, who directed him in Raanjhanaa, recalls how Dhanush’s dance number Otha Sollala in Aadukalam (2011) drew his attention: “I saw this man dancing bindaas on the streets of Chennai with the tip of his lungi in his mouth. He was the boy-next-door. He was so uninhibited and real that for a while I forgot it was Dhanush.” He turned his ordinary appearance and endearing boy-next-door image into his big strength. “I do feel physical limitations at times, I won’t deny it,” says Dhanush, “But I work around it. I am only 31, I can wait for a few years before I try and experiment.” He has played a gangster in Puddupetai (2006), a fisherman in Mariyan (2013) and a jobless youngster in Vellai Illa Patthathari (2014). His ability to inhabit the soul of the characters he plays won him the National Award in 2011 for his performance as a rooster fighter in Aadukalam. “For me it all begins with being honest to yourself and the script,” he says. “I did not consciously choose scripts where I would play the common man. But I wanted to be true to every part I played.”

There was a time when Dhanush would write poetry and make short films just to understand the medium well. “Those films were just for me. I would never put them out there because I allowed myself to make all the mistakes I wanted in those films.”

For much of the country, Dhanush will always be the man who created one of India’s biggest viral hits, Kolaveri Di, a ‘Tam-English’ song from 3, a 2011 film directed by Aishwarya. It was at a tough phase in his career when his films were suffering losses. Kolaveri Di got over 30 million views within two months and has innumerable cover versions by amateurs and musicians worldwide. It’s a tale told too often, Dhanush insists, but he thinks that Kolaveri Di became way bigger than he’d have liked. “What happened with Kolaveri is what happens in 12 frames in films. Everything is fast. The song became unnecessarily big. I did not expect the song to find a life of its own and become a global phenomenon. The song did not help the film at all and live up to its purpose. It killed the film.”

From resisting the idea of acting to becoming one of India’s best known actor-producer-singer-songwriters, his has been a whirlwind ascent. The father of two kids, he runs a film firm with his brother that nurtures young talent. Ask him if his kids like his work, and he says with a smile, “They only watch the films I don’t die in.”

In a TV interview, Amitabh Bachchan said that Dhanush is the kind of actor who isn’t too carried away with his starry image and that works well for him. “Whenever people tell me I’m an unconventional hero,” says Dhanush, “I tell them I met the right people at the right time. I got lucky. Talent develops with the kind of work that comes to you. If I had not met those beautiful directors and those beautiful scripts had not come my way, I would probably have been a bad talent.”

Bollywood has put his directorial plans on hold, but he doesn’t mind. “I am just a human being. I just perform in films for a living and I try to do a good job. I don’t think more than that, I don’t think it’s healthy. If there is some star power I’m not feeling it yet. It’s going to take me a while till I really discover myself as an actor.”