Exploring war, nationhood and the Left movement, Bangladeshi artist Naeem Mohaiemen has emerged as the chronicler of a merciless history 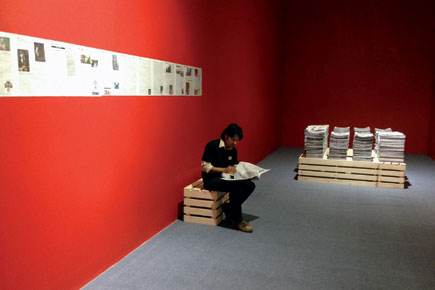 Exploring war, nationhood and the Left movement, Bangladeshi artist Naeem Mohaiemen has emerged as the chronicler of a merciless history

Midway through Afsan’s Long Day (40 minutes) by New York and Dhaka-based Bangladeshi artist Naeem Mohaiemen, there’s a dream-like sequence through night skies, and finally an ad billboard with simply an image of a silhouetted figure holding out an umbrella, and glowing just above the head, the words ‘Endless Opportunity’. Therein ends the dream, and the narrative jumps back to the reality: that of missed ‘endless opportunity’—or rather, endless episodes of missed opportunities.

Afsan’s Long Day,which premiered at the MoMA(Museum of Modern Art) this spring, explores Bangladeshi Left politics of the 1970s through the diary of Bangladeshi leftist journalist Afsan Chowdhury, whilst deftly weaving it with the radical Left movements worldwide. Everywhere, it seems, the story is the same, of buoyant dreams, which eventually collapse and crumble.

The film—along with allied multimedia works—forms a part of Mohaiemen’s second solo show, The Young Man Was (cont.), which opened at Experimenter, Kolkata, last month, picking up from his 2011 show at the gallery, The Young Man Was (a few chapters), an ongoing investigation of Bangladesh’s Left history via art. Combining archival research with personal and pop-culture anecdotes, Mohaiemen employs video, photography, text and objects, to fill in the blanks of official history. Or, to just explore multiple, messy versions of it.

It has taken a while, however, to arrive at this idiom. Mohaiemen recalls his initial brush with brushed-under- the-carpet history in 1993 while he was working on a project called The Shobak Tapes. While on a Watson Fellowship to explore the ‘good war’ of 1971 that created Bangladesh, Mohaiemen fell into a black hole of history in his pursuit of alternative research: the voices of the radical Left. Hitherto ignored by official narratives, this round of interviews presented complete contradictions to his thesis. As a young student of History, the need to arrive at a conclusion was paramount, and the lack of it, crippling. But in the course of time, Mohaiemen, now a PhD student of Historical Anthropology at Columbia University, is far better equipped to handle such contradictory, Rashomonian realities.

For one, he moved from typical academic mediums to the visual arts. Contemporary visual arts—with the endless room it offers for dual, fractured and schizophrenic realities to coexist—seemed paradoxically like the neatest space for this chaos. Mohaiemen’s form, often one that forces the audience to work hard, derives from his attempt at “investigating a minimalist aesthetic”. The idea is to challenge the idea of art as a rarefied space; “everyone is an artist”, including the audience, whose interpretation of the work makes them an active participant in the process of art-creation.

The work preceding Afsan’s Long Day, is United Red Army: The Young Man Was, Part 1, a 70-minute video. Acquired by the Tate Modern in 2012, it is about the hijacking of Japan Airlines’ Flight 472 en route from Paris and Tokyo to Dhaka by a unit of the Japanese Red Army in September 1977, and Mohaiemen’s memories of being glued to the television set and watching those events live, waiting for his favourite TV show The Zoo Gang to come back on air.

The negotiations take place in pitch dark, with only the conversation between the Bangladeshi military and Japanese hijackers appearing as subtitles. This is counterpointed with a parallel narrative, which is Mohaiemen’s calm voiceover, measuring the events of the past, including his own reactions to the events as a child, in retrospect.

Something about the narrative is unputdownable, in video terms. A whodunnit. There are also layered dynamics of language: for instance, the negotiations take place in English, of which neither of the two is a native speaker. The comfort with which the British-English-schooled Bengali officer speaks is pitched against the nervous stutter of the Japanese speaker. Ironically, this also dislodges the hijacker from his position of command, but this, right here, is an example of messy multiple realities.

Language is a key tool in the work of Mohaiemen, not simply because he uses a lot of text in his installations, but because he plucks out texts from official mainstream sources, which he then uses for ironical or critical effect, and also as running themes through his work. For instance, if there’s one phrase which has served as a backbone to his work, it’s shothik itihaash, which means correct/precise (‘shothik’) history (‘itihaash’), words thrown at Mohaiemen by an elderly gentlemen at a conference in Dhaka. The thought was repeated by a professor at Michigan who noted that the present generation was insufficiently “respectful” of foundational history. “Each time I shivered and wondered who was going to decide for us, once again, what was or was not ‘correct history’.”

In the Experimenter show, too, there are a couple of such phrases. For instance, there’s a site-specific installation featuring tiny name labels in Bengali neatly in grid-formation pasted on a wall. Called We The Living, We The Dead, it looks at the targeting of Hindu intellectuals during the 1971 war. The project draws from Humayun Azad, one of several post-1971 anti-establishment writers whose works Mohaiemen repeatedly draws on. Azad’s angry cry, “Amra Ki Ey Bangladesh Cheyechilam?” (Is this the Bangladesh we wanted?), is an anchor for many of Mohaiemen’s political sentiments.

Perhaps because the viewer is allowed a distance from it, it isn’t hard to see traces of humour in such a grim situation. One of his projects Shokol Choritro Kalponik (‘All Characters are Imaginary’), a fictitious newspaper (the newspaper itself was titled Dainik Kalponik, meaning ‘Imagined Daily’) formed on the lines of a vernacular daily, does trigger off little giggle-a- thons whilst addressing subjects as serious as nationhood and Subcontinental politics. The project—which featured at the Dhaka Art Summit this year— was simply a newspaper anyone could walk away with (and clearly many did).

Mohaiemen also sneaks in a (not so unreal) news item about the Bangla language dying in West Bengal, its youth increasingly abandoning Bangla classics of Tagore and Co for the racy school of Indian-English pulp fiction. There are also laugh-out-loud news items such as one where an egg entrepreneur from Bangladesh gets on the Forbes list of high-flyers. The ridiculous is juxtaposed with the serious: such as ‘Karachi to repay historical debt’ or ‘New Delhi pays homage to border crossers by building a memorial to Felani’ (Felani Khatun was a Bangladeshi girl shot on the border by the Indian BSF) outside Indian Parliament.

The combination of producing a work that is ridiculous, as grim as it is sarcastic, has a curious effect on the audience. For one, it forces one to examine the roots of the funny as also that of the unfunny. Which is also when you begin to think: why is it so unbelievable? Why is it so unbelievable, for example, that New Delhi will build a memorial to Felani?. And of the answers you come up with. They are likely to be uncomfortable, if somewhat messy. Well, that was the idea. n

(The Young Man Was (cont.) is on at Experimenter, Kolkata, until 27 September)