Delhi and All That Jazz

A talented pack of musicians, a growing number of venues and festivals, and an appreciative audience are pushing the capital’s jazz scene 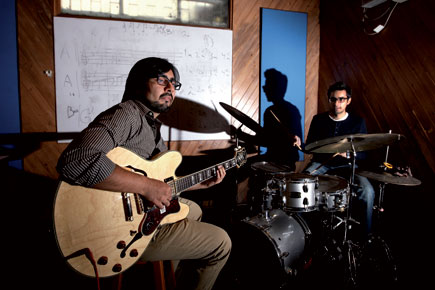 A talented pack of musicians, a growing number of venues and festivals, and an appreciative audience are pushing the capital’s jazz scene

The global Music Institute, or GMI as it is popularly known in the music community, is located in a nondescript corner on one of the many lanes of Lajpat Nagar in Delhi. All you see in every room are instruments and cables, whiteboards with musical notes scribbled on them and a ‘rules and regulations’ notice put up on the blue soft-board. This unlikely place has become the centre of the jazz scene in Delhi, and the duo bringing jazz to the city are the two young men behind the music school, the Balani brothers, Aditya and Tarun.

They perform as the Aditya Balani Group and Tarun Balani collective— elder brother Aditya plays the guitar, while Tarun plays the drums. They are ipressive, that is what the buzz around them says, and rather difficult to get hold of, given that they teach, are involved in multiple projects and shows, travel and create music on the go, like they did on a recent flight back home. The day we meet, Tarun’s just back from New York and had performed at the Goa International Jazz Festival last month and Aditya had a flight to catch to Singapore.

The two brothers have been playing music since school. They were the founding members of the popular fusion band Advaita. “I gave the name,” says Aditya; “There were many innovative elements behind Advaita,” adds Tarun. Jazz is something that happened unexpectedly, after a visit to New York and a stint at the Berklee College of Music. Aditya talks about how the music scene was generally changing around 2006 in India when people had access to YouTube, various online portals, as well as exposure to different styles of music. “Earlier, we had rock, Indipop and Hindustani—that’s it. Soon more gigs started happening and people were branching out to different kinds of music. And before we knew it, the jazz and alternate music scene just happened.’’ The school started informally as the brothers began to teach friends who were interested in jazz. There are students now from the Northeast and Jammu & Kashmir at the GMI, which Aditya feels will help add an element of Indian sound to their compositions.

For a form of music to thrive, three elements are necessary: audiences, musicians and venues. At the GMI, it is easy to see how Delhi has found all three. With many non-commercial venues, a growing community of jazz enthusiasts and experimentative musicians, Delhi has developed a distinctive jazz scene, unlike traditional favourites like Mumbai and Kolkata.

The city plays venue to two official jazz festivals every year—the International Jazz Festival, organised by the ICCR in the first half of the year, and the Jazz Utsav, held in the second half of the year (founded by former Attorney General of India Soli Sorabjee, one of the earliest proponents of jazz in the city). The festival director of Jazz Utsav, Astri Ghosh is instrumental in bringing together various bands. “The jazz scene in Delhi is pretty active, with a lot of young musicians showing an interest in it and with the advent of more music schools,” she says in a phone conversation from Goa. “Now every time we have the festival, there’s a faithful audience. Even the foreign bands that visit say that the audience knows (and understands) what they play,” she adds.

Emmanuelle de Decker worked with Blue Frog in Mumbai for five years and is now co-director of the Goa International Live Jazz Festival. She also set up the website Jazz In India— ‘an online resource platform to build a jazz community, support, promote and develop jazz initiatives in India.’ Over the phone, she talks about how musicians the world over are experimenting with different forms of jazz, which is gaining popularity at festivals across the country. “There are notes of hip hop, electronica, world—which is experimental and appropriate too.’’ Which is what’s interesting about jazz. It evolves with every decade. It’s like a sponge, taking [sound] in from everywhere. Filmmaker Susheel J Kurien, who calls himself an amateur musician and has directed Finding Carlton, a documentary film that explores how jazz made its entry to India, says over the phone from New York, “I think what has become interesting is that jazz is connecting with the Indian musical environment. It mutates and transforms wherever it goes, and new ideas and new forms are coming out.”

Jazz drummer Nikhil Vasudevan of the band Moonshine has been playing the drums for a little over a decade and feels people are now getting the “right kind of education” and becoming “super serious” about jazz. “They’re not just doing old school music, but also creating their own style.” Vasudevan is an integral part of the music circuit of Delhi. Interestingly, he credits Facebook for increasing awareness of the form. “Most people who visit gigs are invited on Facebook and in turn invite their friends,” he says. This could be true. Social media plays a big role in at least spreading the word. Regular invitations to jazz nights at restaurants and bars across the city act as bait for the young who’re looking for something new. And the best part is, people are creating original music and not restricting themselves to cover versions of jazz legends. As Kurien says, “World jazz is never a cover version. The world I live in, jazz is never ‘cover’, it is improvised music.”

Recently the India International Centre held a three-day exhibition titled ‘Jazz in India’, which included a talk by journalist and author of Taj Mahal Foxtrot Naresh Fernandes on how jazz became Indian music. Jazz has a long history in India. From the 1920s to the 1970s, jazz was performed in nightclubs and hotels, before it gradually made its entry to Hindi film music, where music composers engaged jazz musicians as assistants for ‘harmony’. It can be found in early songs like Sunday Ke Sunday, Mera Naam Chin Chin Chu and Eena Meena Deeka. The talk was followed by a brilliant performance of jazz in the swing era by the Rohit Gupta Trio. Incidentally, Gupta, who played the keyboard, studied at the GMI. And the biggest round of applause was reserved for the trio’s original creation Contrition. Given the full house and young crowd present for the talk and performance, jazz is indeed ‘getting there’.

Singer Vasundhara Vidalur of the erstwhile Delhi based jazz outfit Adil & Vasundhara, known for her sultry voice, is one of the most popular jazz figures in the city. “When I started six years back, I was told I won’t be able to make a living by performing jazz, that only older people are interested in it.” She is, however, one of the busiest performers in the city, with up to three performances a week and an audience that is largely young.

A meeting with jazz pianist Arjun Sagar Gupta (a living encyclopaedia on jazz and a member on the board of Jazz Utsav) at his Piano Man Art Cafe in Basant Lok market became a ‘Jazz for Dummies’ session. His knowledge of the genre makes you want to learn more. Gupta talks about how the love of jazz has been slow and steady in India and the how it’s important to market it properly. What troubles him, however, is the scanty representation of Indian jazz at the Jazz Utsav. “I don’t think the Utsav represents the Indian jazz scene properly, and it’s my personal mission to fix that,” he says. I ask him about the piano at the centre of the cafe, which sometimes sees people hopping over to play. You’re allowed to play any tune on the piano—apart from live performances, the cafe usually plays all forms of jazz on its music system. “As long as you know how to play. We’ve had occasions when people have been asked to stop,” says Gupta sheepishly.

Naresh Fernandes, at his talk at the India International Centre, spoke about many Indian jazz musicians and how their influence helped spawn a fan base for this genre. But the interesting part was when he spoke of Goan jazz musician Frank Fernand, who once described jazz, and perhaps rightly so, thus, “Like Indian music, jazz can’t be written. You have to feel it. There are 12 bars, but each musician plays it differently. You play as you feel—morning you play different, evening you play different.”

Certainly, even to appreciate jazz is an art. And while it is developing into an experimental sort of music and as Delhi explores its depth and potential, “appreciating jazz is not something that catches you”, says Aditya Balani. “It may, but it’s something like bubblegum and black coffee. You have to acquire a taste for it,” he adds with a wide smile.