Alberto Manguel, in fine form at the Jaipur Literature Festival, on why he doesn’t believe in virtual literature or virtual sex—and why you shouldn’t read Paulo Coelho 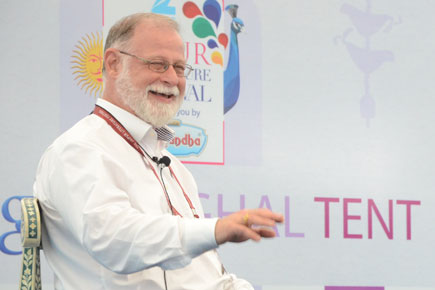 Distinguished editor, critic and author of works of non-fiction such as A History of Reading (1996), The Library at Night (2007) and Homer's Iliad and Odyssey: A Biography (2008), Argentine-born Canadian writer Alberto Manguel was one of the bright sparks of a damp Jaipur Literature Festival. Through the rain, viewers visited Manguel’s celebrated library, commemorated in A History of Reading, in an enjoyable half hour (sessions were compressed in a chaotic second day of events, but in this case, managed admirably).

Manguel spoke fondly of Borges, whom he read to, famously, when the great master was unable to read. “When he became blind he decided he could no longer write prose. He said he would continue to write poetry, because poetry came to him as a music, to which he would add words, and he would compose those words in his head, and then dictate them. But prose, he said, you had to… see your hand write. But writers establish these rules and then break them. Because Borges began to imagine stories, and after a time, he was so pregnant with those stories that the stories had to be born. But before writing them, he wanted to see how the great writers, the writers he thought were great, had written their short stories. He would ask me to read the stories that were his favourite by Kipling, Henry James, Stevenson, Chesterton and writers in other languages. And, it was a curious process because it was a process of a watchmaker who wants to see how watches were made and take them apart, and see how the parts fitted. So, I would start to read to him a Kipling story, and after two lines, he would interrupt and say how interesting Kipling uses this word – it would reappear three pages later in a different context. It was very much a workmanship kind of reading in which I didn’t exist except as a voice.”

On the power of readers, Manguel was emphatic: “Borges used to say that a writer writes what he can, but a reader reads what he wants. And that difference has struck me as fundamental, because we are told that histories of literature are written through the eyes of writers, and according to what writers want to say. But that isn’t true. Every writer wants to be remembered, wants to be a bestseller, wants to be a classic. And we readers are not purged by their pleas. If we do not like it, it goes into the dustbin. So the history of literature is not the history of writers but the history of what we readers have chosen to put on our shelves. And that led me to write the history of reading, which is an enquiry into what it is that I do.”

There was an acknowledgement of a greater power on the part of readers, even. “They are definitely subversive, because we change the text according to our interpretation. And sometimes the best readers are the censors. In Chile, the dictator General Pinochet banned Don Quixote, because he said it was a defence of civil liberties. And he was absolutely right. Not that he was right to ban the work, but that he was right as a reader – because he saw in Don Quixote, that fundamental subversiveness.”

The distinction between life and literature?

“My grandmother would see me reading and say, ‘Go out and live’, as if what I was doing in the pages was not living. Literature gives me the words to name my deepest fears, my most secret emotions, my most ardent actions, and tells me what I don’t know I know. A line from Emily Dickinson defines something that I intuit, but cannot or could not put into words until I have read it. The lines go: ‘presentiment is that long shadow on the lawn indicative that suns go down. And a warning to the startled grass, the darkness is about to pass.’”

People have been known to sneak into his garden, for a glimpse of Manguel’s famous library, which he chooses from carefully when he travels, he recounted, speaking of the mediums in which we read and the pleasure of the book as an object.

“We are fetishistic [about books]. I always say to lend a book is to encourage theft. If I want to give someone a book, I buy a book and give it to him. The editions in which we read a book are the original editions. My paperback of Moby Dick is the real edition. I have better editions, more scholarly editions, but that tattered paperback records my reading of Moby Dick and has phone numbers jotted on the margins that I don’t know to whom they belong, and train tickets going to places that I don’t remember having visited. A library is in some sense our autobiography.” He joked, when prodded: “I’m glad that my morals prevent me from stealing. Not always.”

Other people’s libraries? “It is true that when I go to someone’s house, the library is a portrait of that person. If he has more Plato than Aristotle he’s a friend. If he has the works of Paulo Coelho I will have great difficulty…” When reminded that Paulo Coelho is very popular around the world, and here, Manguel was unswayed. “Borges has a story called ‘Utopia of a Man Who’s Tired’, who imagines that in the future, because we change our opinions and become so arbitrary in our choices, Hitler has become a hero.”

“Borges once told me that during one of the populist demonstrations organised by Peron’s government in 1950 – Peron was one of the many dictators we have had – against the opposing intellectuals, the demonstrations chanted, ‘Shoes yes, books no!’ The retort, ‘Shoes yes, books yes’ convinced no one. Reality, harsh, necessary reality, would seem to conflate irredeemably with the evasive dream world of books. With this excuse and with increasing effect, the artificial dichotomy between life and reading is actively encouraged by those in power. Demotic regimes demand that we forget and therefore they brand books as superfluous luxuries. Totalitarian regimes (require) that we not think, and therefore they ban and threaten and censor. Both by and large require that we become stupid, and that we accept our degradation meekly, and therefore they encourage the consumption of pap. In such circumstances, readers cannot but be subversive. And I would like to add, even if they are our sponsor, that Amazon shows as the books that deserve being remembered, the books of Paulo Coelho and other such pap. Buy books from independent bookstores.” He added, separately, “There is a great difference between the text we read in different containers. That was a difference that those who were startled by the text on the papyrus scroll noticed when they said it’s not at all like the clay tablet, that was easy to hold in your hand; you could see the physical dimension of the book when the tablets were in a box. Now, we have a scroll, we don’t know how long it is, we have to create the page as we go, as we do on a computer. While it’s important to know about the distinction and to think about it, it doesn’t make a difference if you find those words that you want in a Kindle or in a printed book. I’m from the culture of the printed book, so for me the page, the printed page, is important. I want to scribble on it. The physical element of physical contact, the smell, is something that belongs to my relationship with a book, with my amorous relationship to a book. And in the same way that I don’t believe in virtual sex, I don’t believe in virtual literature.”


A History of ReadingAlberto ManguelIliad and Odyssey: A BiographyJaipur Literature Festival 2015The Library at Night