Dayanita Singh: At Home in Her Meta-Museum

The art of turning images into a mobile sensibility 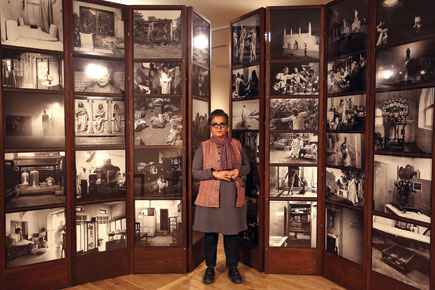 In the late afternoon winter light, Dayanita Singh’s ‘Museum Bhavan’, made up of her collection of nine ‘mobile museums’, looks solemn and spectral. Thin, white textiles cover some of these structures, which occupy most of the living room of her south Delhi home. In the coming few days, these cabinet-like contraptions will shift to Kiran Nadar Museum of Art (KNMA) in Saket, New Delhi, and stay there for the next six months.

“As you can see, these are of different sizes and shapes,” says Singh, as she pushes out a section of one of the museums towards me. “These structures open and close in several ways, some of them have spaces inside to store a reserve of images, which can be rearranged on the display panels as frequently as one likes.” Some of the museums have trustees—the list of trustees include art curator Hans Ulrich Obrist and historian Sunil Khilnani—and will be unveiled by the trustees, should these persons happen to be in town for the duration of the exhibition.

The museums are hard to classify as objects. Some are boxy and portable, while others are stately and sprawling. You can hold a few of them in your two hands. And you can walk around the others, or squeeze through the gap between two large museums, should Singh, the proprietor of Museum Bhavan, wish to force you to do so by opening out the door-like arms in a certain angle. As you step inside the hollow created by the arms of two consecutive museums, you may be surrounded by a sea of images or you may find stacks of prints waiting to be put up in some future moment.

Made of wood and moving on hinges, these museums are a cross between display shelves and cabinets, occupying the nebulous zone between ‘photo- sculpture’ and ‘photo-architecture’. But neither term satisfies Singh. “It is a new form and I’m still trying to find the right word for it,” she says. She likens the larger form of the museums to a hardback book, with its two arms that open and close like the front and back covers, and its shelves, running from top to bottom, standing in for the spine.

Ironically, novelty is not what you are meant to be struck by when you peer closely at the contents of the museums. If you are even remotely familiar with Singh’s photography over the years, you will identify a profusion of images, if not exact replicas then at least affinities and patterns, from her vast repertoire in there. Drawn from her books, exhibitions and private archives, some of these photographs have become part of public memory, and hence are worthy occupants of any museum, but most of all her own: the iconic image of a young girl lying on a bed with her face hidden away from the gaze of the camera that appeared on the cover of Go Away Closer ; the striking portraits of Mona Ahmed, the hijra, whose life story was told in Myself Mona Ahmed; even a few of the photographs taken by Singh’s mother, Nony Singh, all appear in a medley of interconnectedness.

Of course, there are plenty of new images as well, or at least those that have not been shown in public before, among the 800 prints that appear in all the museums together. “And there may be more new photographs added to them in the course of the KNMA show,” Singh says. But the point of this body of work, as we already noted, is not the discovery of fresh visuals. Rather, the idea is to feel beguiled by the endless possibilities offered by these images, and their ability to create meanings and moods in various permutations and combinations with the slow passage of time. And for this revivifying quality alone, these museums become such unique modes of expression.

“For far too long, photography has been all about the single image on the wall,” Singh says. “But that is no longer enough for me. In fact, photography is not enough for me.” The statement may sound polemical, but it does capture the essence of Singh’s practice and its trajectory over the last two decades. “I have been trying to rescue the image from the wall for a long time now,” she adds, “and save it from being fossilised behind glass and mounted on a frame.”

Although she began her career as a photojournalist in the 1990s, Singh has broken new ground several times over since then. And with each new body of work, the labels associated with her have changed. From press photographer to gallery artist to bookmaker, Singh has worn every role with ease, and rejected each as quickly as soon as it threatened to fence her in.

Her relationship with her medium has been just as inventive. If film has been the constant raw material for her work, its manifestations have evolved restlessly. At various stages, her photographs have appeared in the print media, as prints on the wall, as a sequence of images in a book. Then the photo-book itself has been mounted on a frame or hung on the wall and displayed as an art object, and now the photographic prints have migrated to the museums, serving more as cogs in a complex conceptual wheel rather than as individual objects of desire. In the years of experimenting with the photographic image, her aim has been to transform the way we consume and covet it, instead of letting us become fixated on its surface dynamics.

“As of now there are nine museums,” Singh says, “File Museum, Museum of Little Ladies, Museum of Chance, Museum of Furniture, Museum of Machines, Museum of Photography, Museum of Vitrines, Museum of Printing Press and Kochi Pillar.” In the course of the KNMA show, she hopes at least one more museum will be born of the interaction among the existing ones. As Singh says in the invitation to the exhibition, Museum Bhavan ‘will wax and wane with the lunar cycle’. Maybe after once such churning, there will be a new Museum of Bespectacled Men or perhaps a Museum of Smoke, though, she adds wryly, “I hope [the latter] will not [happen] during the opening.”

The living, organic, regenerative spirit of the museums becomes evident as we walk among them in her apartment. “As you can see, some of them are already related,” she explains. “Museum of Photography is about how we live with photographs—it’s not about great photography—and it has a lot of furniture in it.” There is always the chance that an accidental cross- pollination of images between it and Museum of Furniture will result in a Museum of Beds or a Museum of Chairs. You may look at the arrangement of the images and decide to see only beds and chairs—or you may choose to see empty beds and empty chairs, which may bring to mind a Museum of Loneliness or even a Museum of Missed Conversations.

Singh is delighted as I describe my elevation of the museum from a level of everyday realism to an inward-looking metaphor. “These images were choreographed with a similar transition in mind,” she says, “The editing of these museums has been done not just by themes, but also tonally.” And the tone for a particular combination may be triggered by different sources. There is, for example, a Vikram Seth poem in a slot in one of the museums, and its presence immediately evokes a way of reading the images surrounding it. But even without any literary gloss, a museum can be made to respond to, say, the quality of the weather, or a particular emotion, on a certain day. “It would really be a strange kind of contemporary art that cannot adapt itself to the mood of the moment and respond to change,” Singh says.

Given the scale of some of the museums, the eye is not allowed to linger too long on each image either— there has to be a sweeping glance, maybe a pause or two at the pivotal points, and then a few more arcs of viewing, from left to right, right to left, up and down, crisscross, before you move on to the next formation. “Being an analogue photographer, I have always worked with contact sheets and so I am used to looking at clusters of 12 or 36 images,” says Singh. It is the same habit of looking that she wants to inculcate in the viewer.

The museums, effectively, are oversized holograms of contact sheets, where the emphasis is on the totality, not the rarefied image in isolation. But it is not easy for most viewers to tear themselves away from the singularity of the photograph and venture to build their own narrative around an image cluster. “If you think of it in terms of a literary analogy, the situation would be somewhat like this,” says Singh, “I give you a beautiful, poetic sentence, but you decide to get stuck on a single word in it and therefore you miss the truth in its entirety.”

Indeed, she spares no effort to make the experience of viewing these images a richly complicated one. You can never see all 800 images at any depth. Or even if you do, theoretically, you will not retain their memory with any certainty. “I don’t want you to get too attached to any one constellation but have you keep coming back to Museum Bhavan to see the images in other configurations,” says Singh. She even intends to keep some of the museums covered in sheets so as to give the viewer only a partial glimpse of what lies behind. The unveiling, if it happens at all, will have to be timed when the stars and the moon are aligned.

And so, as you walk into and around Museum Bhavan, you find your basic assumptions about the photographic image being challenged and shaken in the most fundamental ways. Not only do you start reckoning with what the photograph stands for in the world of art, but also with the ways in which it is, and has been, traditionally consumed so far.

There was a time when Singh was known for her crystal-clear silver gelatin prints, which were printed in New York. But now she scans her negatives and makes digital prints, which are much quicker and less expensive. It’s the idea, not the image per se, that absorbs her.

“There could come a time when not a single image may exist in my museums,” says Singh, before we part. “What will you do then?”

(‘Conversation Chambers: Museum Bhavan’ is on view at the KNMA, Delhi, until 30 June 2016)