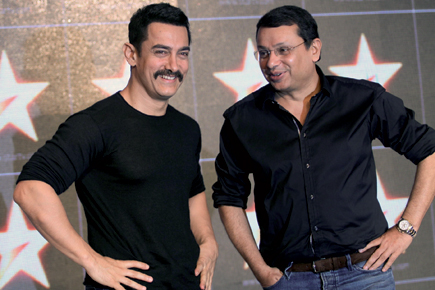 On 25 February, Star TV CEO Uday Shankar, far away from his plush corporate office in Mumbai, was in a remote village in interior Bihar called Gehlaur. Along with him was actor Aamir Khan and they were there to launch the second season of Satyamev Jayate. The village, located in Bodh Gaya, was selected because it was the residence of Dasrath Manjhi, a poor labourer, who single-handedly constructed a road over 22 years to give Gehlaur access to the rest of the world. Manjhi’s tale is the first topic of discussion on the show that starts 2 March. On their way back from the event, Shankar and Khan sat in stunned silence for a bit. And then they told each other how no profit and loss numbers can justify this kind of experience.

“I had been a TV journalist and have seen massive election rallies. But I have never been stunned by an experience like I was yesterday. It took us five hours to drive there from Patna and the number of people lined up all along was amazing. People said they had never seen a gathering of this kind ever, and it wasn’t as if Aamir was going to dance there. Everyone there—right from the officials, policemen and the people attending were talking about the show, even if they hadn’t seen it. It was overwhelming. This is the kind of popular connect that makes it worth it,” says Shankar.

When the show was launched in May 2012, Satyamev Jayate took over a slot families had reserved for mythological serials like Mahabharat and Ramayana at one time. In a way, the show is as much about good-versus-evil as these mythologicals. Except that it is about real people doing extraordinary things; of changing societies that seek to crush them. Aired on Sunday mornings, the issues Satyamev Jayate tackles range from female foeticide, dowry and honour killings to health care malpractices. Superstar Aamir Khan is sutradhar (narrator)-cum-listener-cum-moderator as he speaks to victims, survivors, experts and advisors on the subject. This time, he is even singing for the show.

The very first episode on female foeticide was watched by nearly 60 million Indians and, according to World Information Tracking, was the most talked about new television show in the world that month. On 6 May 2012, ‘Satyamev Jayate’ was also the most searched phrase on Google. The show had 487,144 messages on its website, 445,389 on its Facebook page, 3,176,620 page views on the website and 59,230,605.97 FB impressions. During the course of 13 episodes, it also collected Rs 22 crore as donations made through Axis Bank.

So it’s no wonder that Season 2 is already touted to break new records. But how does a show of this nature walk the fine balance between social good and making big bucks. The channel refuses to quote figures but has heavyweight sponsors like Airtel and Axis. Shankar says that as a company, and as an individual, he is very clear about the fact that the show must be done well. “If you want to create a show that will touch hundreds of people, you have to do it the best possible way. We knew this was going to be an expensive show, but we wanted to get the best stories, the best narratives and someone like Aamir Khan. It’s an expensive recipe. Our goals were so ambitious because we wanted it to be the most-talked- about and discussed show ever. And it would be immature and childish to think all this can happen without resources. Star as a channel has a viable business model—we make good money elsewhere, so we can commit money to something like this show,” he says.

This time, however, there is a difference in the show’s format; all the episodes won’t be aired at one go. Satyamev Jayate will be aired in blocks of episodes through the year. The makers feel that every episode requires such intense engagement from viewers that they need some time to process it. Nevertheless, the chunks of episodes will be relevant to the points of time when they are slotted for airing.

One way the show succeeds in making it an intense experience for viewers is by shocking them with horrible truths. Audiences spent many Sundays in 2012 shedding tears and then resolving to do something about the issue shown. This writer’s mother, who does not know how to operate a mouse, insisted that she go on the show’s website after nearly every episode, leave a comment and make a donation.

After the episode on female foeticide was aired, almost 1.02 million viewers voted in support of State intervention, getting the then Rajasthan Chief Minister to set up six special fast track courts to deal with such cases. There was even an improvement in the implementation of the provisions of the Pre- Conception and Pre-Natal Diagnostic Techniques Act, which deals with female foeticide. In Maharashtra, the government requested the Chief Justice of the Bombay High Court to fast track trials under this Act—49 people were convicted, 33 imprisoned, 35 registrations cancelled, 291 sonography machines seized and 341 abortion centres shut down. In another instance, after an episode on child abuse, 1.15 million viewers voted in support of and got the Lok Sabha to pass the Protection of Children Against Sexual Offences Bill that had been languishing for years.

Harish Iyer, who appeared on the episode and talked about how he was sexually abused as a child, says that he is still recognised on the streets as the boy from Satyamev Jayate. “I got 50,000 emails, calls and messages post the show. I kept count for a while and then lost track,” he says, “But it really made a difference. Once I was on a train, and a boy came up to me and said he had seen me on TV and then dragged me to his mother, who sat in a burkha. She then proceeded to tell me how her other son had gone through the same thing. And that after hearing my story, she knew what pain he must be going through, and how she proceeded to take action.”

The tag line this time is ‘Jinhe Desh Ki Fikar Hai’ (for those who are concerned about the nation). With elections imminent, does the show want to influence outcomes? Shankar says, “It’s not our job to affect voting. The problems that the show discusses are deep seated and can’t be wiped out with a particular government or one election. But we aim to create national consensus on these issues. It may help people make up their minds better and in turn help them vote better.”

The CEO is hesitant to give away details of topics that will be covered this season, but says that as a content person, the kind of reaction the show got still amazes him. “People were passing on messages everywhere that they were going to watch the show. That just makes all the effort worth it,” he says.