Comedy on the Go 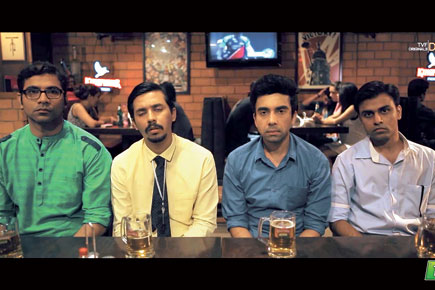 The revolution began with the story of an ordinary man. Naveen Bansal, stuck in a dull 9-to-5 job, is heartbroken after his company does not allow him to lead a project in Brazil. He meets a senior from college who encourages him to get cracking on his own startup. The story of Naveen Bansal getting together with three of his other friends to launch a business offers a neat parallel with the launch of web fiction as an entertainment platform in India. “For a long time we believed that there was no audience for online content, but the success of both our shows Permanent Roommates as well as Pitchers has gone on to prove that there is a huge audience for web shows,” says Arunabh Kumar, founder and CEO of The Viral Fever (TVF), itself a successful startup in the market for entertainment.

Today, TVF has a YouTube channel with over 1.4 million followers and over 12 flagship shows that offer fresh videos every few weeks, each logging a million views or so. It was in 2011 that Kumar approached youth channels to sell his ideas. But he was repeatedly shown the door and told that the content he was trying to sell was for mature audiences which India lacked. His determination rose with each rejection, and he decided to make his first web series. The first one went online at the end of last year: Permanent Roommates, a show about long distance relationships which was divided into five webisodes. Each episode got more than a million views and made it to IMDB’s list of ‘highest-rated TV series in 2014’.

TVF may have started it, but the market for web series has grown in no time at all. Earlier this year, Pechkas Pictures and ScoopWhoop Talkies came up with a seven-part web series called Baked. This story of Delhi college students who started a midnight food delivery service was well received and inspired other such web series. Anurag Ramgopal, owner of a Pune- based production house, Let’s Make Better Productions, decided to make two web series which are almost unthinkable when we consider what the Indian viewer is used to watching on TV: Friction, which is on biking and automobiles in Pune, and Stoners Speak, on the city’s culture of smoking up.

What is heartening is that it isn’t just startups in this business, but big players too that are taking a keen interest in this web series revolution. Y-Films, the youth division of Yash Raj Films, made its debut with Man’s World, a comedy on gender inequality. It now has a second web series, a romantic comedy called Bang Baaja Baaraat, running on the web which has found lots of takers for its original and relatable content. Sony Entertainment’s video-on-demand service Sony LIV launched an original web show #LoveBytes on urban romance which premiered a couple of months ago. Viacom 18 is the latest to join the fray with its video-on-demand platform Voot. Bollywood seems to have caught on to the rage with Rohan Sippy also directing a couple of web series for Eros Now: The Client, starring Bipasha Basu, and Side Hero, which has Kunaal Roy Kapur and Konkona Sen Sharma in lead roles.

“It is tragic to see that television doesn’t provide any sort of youth content. And this has resulted in the youth turning towards the web. Besides, the overall growth in personal gadgets like smartphones and tablets has made sure that you can always watch something on the move. From a consumer standpoint, this is one of the biggest reasons that web content is working in India currently,” says Ashish Patil, vice-president, Y-Films. Increasing bandwidth speeds and falling prices of smartphones have, of course, had a big role to play in the popularity of these shows.

One such young and connected viewer is Ajay Menon, an engineering student who lives in a hostel in Ahmedabad where the net is easily accessible. Most of the shows he watches are online. “Staying in a hostel, one doesn’t have easy access to television. Also, TV in India has very alienating content for the youth. Hence I prefer watching all my shows online. I have seen all the recently launched web series in India, and in terms of content they are not just original but also quite risky and edgy,” he says. For students like Menon and many others, Indian web shows provide an alternative to American popular culture.

Arjun S Ravi, the co-founder of NH7 who has made a six-episode web series called Standing By on the indie music scene in India, feels that the days of appointment viewing on TV—not counting sporting and political events, of course—are numbered. “With the amount of unnecessary censorship on television today, many content creators find platforms like YouTube better suited to present their content,” he says. For Ravi, who targets a niche audience online, there are additional advantages that the web medium offers, the biggest of which is that there is no need to shorten the episodes unnaturally for a fixed-length TV slot.

Web series as a global phenomenon took off in the mid-2000s. In 2003, an American comic science-fiction series Red vs Blue premiered on the web. It was distributed independently via online portals like YouTube, and became super successful with its count of ‘hits’ rising by the day. Soon it reached the 100 million views mark and is the longest running series till date on the web. However, what really changed the game and upped the ante for content was the Kevin Spacey- starrer political drama, House of Cards on Netflix. It became the first web only series to be nominated for major awards, an Emmy and Golden Globe included. Netflix was also responsible for reviving Arrested Development, the Jason Bateman-starrer which had had a good run on television and wound up in 2006. With Netflix set to enter India, the web series revolution only seems to be on the ascendant.

With more than 350 million people online in India now and counting, the players in the market have it more or less sorted for themselves for the next few years. Patil of Y-Films gives the business lowdown. “From a creator’s point of view, entry barriers on the web are very low. While creating content on television, one has to constantly fight various questions of what is affordable.” In comparison with a low budget film, which takes at least Rs 7 crore, web content is cheaper to make. Also, creators are not bound by any format. Anand Doshi, co-founder and chief content officer of Click Digital Studios, was working at a production house three years ago when web content was unheard of. But he decided to venture into it. “It paid off because there was demand for various kinds of content,” says Doshi. Click Digital Studios has come up many interesting shows with Bollywood as its background; Shudh Desi Endings, Shudh Desi Gaane and Shudh Desi Raps are a mix of Bollywood and humour. “That is because 60 per cent of the content that works in this country is infused with Bollywood,” he says.

With quite a few shows having done well on the web now, the big lesson all the makers have got is not to ever take the web audience for granted. Kumar of TVF says that even when they had absolutely no reference point for a particular show, they were clear about not sacrificing production values and acting skills. Patil of Y-Films seconds this point of view: “Just because we’re making content for the web, doesn’t mean that we need to sacrifice production values. You need to keep it slick and provide the viewer a cinematic experience so that he or she comes back for more.”

The web medium can be mined for interactivity, too, he says. As soon as Bang Baaja Baaraat is over, they plan to hold interactive sessions where viewers can talk about their own experience of a big fat Punjabi wedding or an especially hilarious marriage blooper and so on.

As in the West, the success of web series has begun to attract better known names to the medium. Bollywood personalities like Kalki Koechlin, Ali Fazal, Bipasha Basu and Konkona Sen Sharma are reportedly all willing to try their hand at it.

That, in turn, could help these passion projects get better financing. Kumar says, “Funding comes with success.” There is some way to go before advertisers and investors can place their complete trust and money in web-based content, but it may not be all that far away.