Burden of a Legacy

Ali Akbar Mehta is nervous about his first solo show. There’s the added pressure of being Tyeb Mehta’s grandson 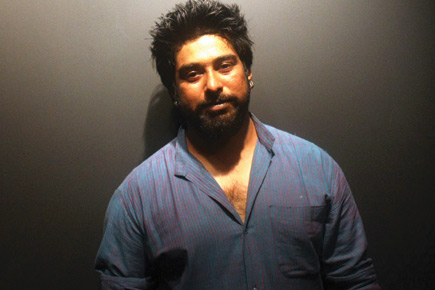 Ali Akbar Mehta  is nervous about  his first solo show. There’s the added  pressure of being  Tyeb Mehta’s grandson


Closer in influence to the surrealist Salvador Dali than to his modernist grandfather Tyeb Mehta, 28-year-old artist Ali Akbar Mehta is in feverish pursuit of a “visual language” he can call his own. In his first solo show, titled Ballad of the War that Never Was and Other Bastardized Myths (currently on at Tao Art Gallery, Worli, Mumbai), Ali’s time travellers, harlequins and clowns, etched out in fine draughtsmanship, are depicted against a background of war, violence and mythology.

The Hieronymus Bosch-inspired allegories of Ali’s theme transcend the realm of the individual to cover societies and the human race. “The idea of violence is intrinsic to our generation. We don’t realise how violent people usually get in the way they interact with their fellow beings, something as simple as road rage. It looks trivial, therefore invisible, but is it this that eventually translates into human crises?” enquires Ali.

The works are also a symbolic reflection on the nature of angst and how we deal with it. “Heroism is a very important element in my work. I look at humans as the heroes of their lives. On another level, I am almost attempting to create hybrid myths in the context of the transcultural world we live in,” says Ali.

He got fascinated by mythic fables as a child, as much by observing his grandfather paint mythological figures as by his personal understanding of comic book stories of ‘good versus evil’. “It’s been, in a sense, dictated by my choice of cartoons, and as I grew up, an interest in Shakespeare and Greek mythology. As a reader, though I was seeing the characters suffer and evolve, they represented a certain helplessness—in Greek tragedies, this helplessness is poetic. The thing with mythologies is that they don’t belong to a particular time, but are universal and meant to last,” he remarks.

War and violence was a topic Dali wasn’t alien to either, and his canvases mark his protest against indiscriminate death and destruction. “Dali teaches us the importance of looking at the world in your own unique way. His works are monumental not only in terms of size, but also of idea.”

Tyeb Mehta, too, having been raised in the Muslim ghetto of Mohammed Ali Road, Mumbai, reacted strongly to the violence he witnessed as a young man. Like Tyeb who scoured Hindu mythology to create some of his most beloved masterpieces, Mahishasura and Kali, one of Ali’s canvases in the current exhibition portrays the dilemma of the Mahabharata’s Karna and his sense of loss, lineage and family.

Speaking of lineage, artistically, Ali is exploring things that are rather different from what his grandfather did. Tyeb Mehta’s concerns centred round form, composition and the perceptive quality of colour and line; Ali’s exploration is in the direction of theme and imagery. Tyeb’s art grew out of his surroundings, his travels and travails, while Ali’s core ideas emanate from the unconscious mind and fantasy. They only partially cohere as painters in their sense of scale (the sheer larger-than-life magnitude of their canvases), affection for mythology and passion for their work. “His work talked about the universalist quality that I connect to. There’s a strong emotional presence in his paintings that inspires me,” he says. Another similarity is that like Tyeb, Ali works slowly and lets his ideas develop over a period of time.

Underscoring, however, the most basic difference in their artistic attitudes, Ali says, “My grandfather evolved from the times he belonged to. The era I come from is different. There’s that gap between us that we cannot ever bridge, and that’s why our influences and references are different.”

This disparity is sharpened when you look at Ali’s digital paintings, which Tyeb, reared on the academic importance of traditional painting methods, would have found difficult sharing an affinity for. It’s a generation gap of sorts. “We both are products of our respective times—there are things he wouldn’t have done and there are things I wouldn’t do,” emphasises Ali, whose exhibition features not only digital prints, but also an animation video, alongside his acrylic-oil canvases and drawings.

Ali once collaborated with the master on a painting for a charity event, an experience he is unlikely to forget. “It helped ground me. It made me realise how working less at a painting could achieve a more pronounced effect.”

Of course, when you have Tyeb Mehta as your grandfather, you cannot escape household tales of his struggle, his devotion to his art practice, and his friendship with MF Husain. “Our grandmother always told us how these two young artists talked art for hours and hours on end,” says Ali, who had the chance to spend time with Husain when he was doing his thesis on the artist’s film Meenaxi: A Tale of Three Cities. “Husain saab had a reservoir of ideas. You could never get him to stick to one topic because he had more to tell you than just that. His ideas were reflected in his work, his gestures, his talks, everything.”

As a kid, since they were staying in Delhi, Ali couldn’t spend much time with his grandfather, who famously lived a frugal life, spent largely in the confines of his Lokhandwala atelier. “We’d come down for summer vacations, and as a six-year-old, I’d see him work on his huge canvases. He would give me paper and some colour, and I would paint with him. He thought I could draw with ease even then.”

It was only when Ali joined Sir JJ School of Art and took up painting professionally that the two started interacting as artists. Ali would borrow his books, and credits him for introducing him to great modern artists and authors. While studying art, Ali also started appreciating the finer nuances of Tyeb’s works. “There came a time when I began looking at his work as formal studies. His pure colours, line quality and spaces hit me hard. I remember him spending days and days trying to figure out the perfect combination of colours, how the canvas could be divided into lesser spaces and how proportionately that worked. His process was very structured,” says the artist who won an award in college named after Tyeb’s teacher, SB Palsikar. Ali’s most cherished compliment came when, after viewing one of his renderings of a bull—a pet subject of Tyeb himself—his grandfather told him, “This marks your arrival as an artist.”

Legacy is a question Ali reacts to with part pride, part insouciance. He respects his grandfather’s standing in the pantheon of celebrated Indian artists, but is equally aware of the fact that it’s no less an albatross for a young artist like him. “When I was starting out, it used to affect me. I didn’t know how people would respond to my work. Then I arrived at a stage when I thought it was a double-edged sword, in the sense that I knew that I would be given special attention, but at the same time looked at more critically. I am hoping it will average out someday.”