A boutique under a cricket stadium, a resort in the middle of a dense coconut plantation, a Bombay highrise built to embrace the rains, there is very little that this Alibaug-based architect is not trying 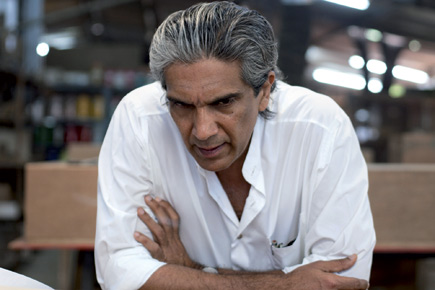 A boutique under a cricket stadium to a Bombay highrise built to embrace the rains, there is very little that this Alibaug-based architect is not trying


A pair of brown loafers on his feet, a white shirt and blue denims over his slim physique, Bijoy Jain walks languorously and with a slight hunch. His reading glasses are perched over his head. They keep his salt-and-pepper hair from falling across his face. He has a gruff voice that seems distant and contemplative. When he speaks, he clears his throat every few minutes, as though a fish bone from lunch continues to trouble him. The famed architect who lives across Bombay’s shore in the coastal town of Alibaug resembles less the sought-after architect that he is and more an individual enraptured by the pursuit of art.

Jain is one of the country’s premier architects. His works have received as many accolades as they have raised eyebrows. Recently he won the prestigious BSI Swiss Architectural Award, and before that the Global Award for Sustainable Architecture, 2009. He has had exhibitions at London’s Victoria & Albert Museum and the Venice Biennale. Some of his original ideas include the Palmyra House that he built for industrialist Anand Mahindra in 2007. It is a resort located right in the middle of a dense and fully-functional coconut plantation. The structure, which he describes as “just two wooden boxes”, was made of local palm tree trunks and plaster pigmented with sand from the beach. In 2010, it was nominated for the Aga Khan Award for architecture. The Leti 360, another resort, this one on a promontory in the Himalayan state of Uttarakhand, was made of stone, wood and glass. It was located 2,300 metres above sea level and was nine kilometres away from the nearest motorable road. Another hailed work of his, the boutique Bungalow 8’s previous avatar, was situated underneath the benches of Wankhede cricket stadium. The high-end boutique was opened by lowering its floor level by about 600 mm (or 24 inches). Fluted glass facades were used to provide light, and the underside of the stadium’s benches with its descending steps served as the boutique’s ceiling.

It is not just his work, but also his style of work that is interesting. He lives in a two-storied bungalow in the coastal town of Alibaug, grows his own vegetables, and just across his residence, he has built Studio Mumbai, his workplace. Here, in an open space that is over an acre large, a few architects and around 120 craftsmen, many of them carpenters, masons, plumbers and electricians born of a lineage of over 20 generations of practice, work with him. Some of them reside in the studio, and others cycle or motorcycle their way to work every day. Jain travels to his Mumbai office around three times every week. But this tends to be severely curtailed during the monsoons, when no ferries operate from Alibaug.

Speaking of his profession in India, the 47-year-old says, “An architect here is a modern idea. [As a role concept] it only came to us post colonisation. Prior to this, we always had what were called master-builders who did and directed everything. We at the Studio try to do this. We all come together and collectively try to do what the masters did back then.”

Jain says that he acquired his craftsmen over a period of time from various parts of the country. He claims to never dictate what happens at the Studio. Everyone from the mason to the architect come together to discuss and develop ideas. “Dialogue,” he says, “now that is a crucial element here [at the Studio].”

A former national-level swimmer, Jain was born to a family of doctors in the Bombay suburb of Juhu. He pursued architecture at Academy of Architecture in Mumbai before travelling to the US to study it at St Louis’ Washington University. He worked with the well-known Los Angeles architect Richard Meier for some time, before moving to London to start his own practice. After working in the British capital for around three years, he returned to India. That is when he moved to Alibaug to start Studio Mumbai. “This idea that we had, this scale of production, we would never have been able to [execute] in Bombay,” he says. According to Jain, not only does the location of Alibaug allow him to engage with the city as frequently as he wants, it also provides him enough space to run such a large operation at a single-location workplace.

When we meet him, Jain is seated in a large enclosure that for its materials—just tin sheets that rest on a network of pipes—looks remarkably sturdy and even attractive. Around him, the rest of Studio Mumbai is abuzz. Craftsmen are repairing old chairs. Another lot nearby is carving wooden beams. On the other side of the space, hidden behind large stacks of tiles left for drying, sari-clad women are preparing slaked lime or what we commonly call chuna. Behind Jain, amid curls of wood shavings and odd pieces of models and furniture, an army of individuals appears to be cowering over Macintosh computers, going through research papers and various surveys. It is not just people. Objects proliferate in this large space. Walls and other parts of buildings are being constructed in the open, marbles and tiles being prepared, small models and artefacts spill out of shelves, and drawings rest against walls. Towards the end of the space, an incinerator burns the day’s rubbish.

As Jain explains, his fondness of models is a result of this being a powerful communication tool, as he sees it. For one of his earlier projects after returning to India, Jain made a whole set of drawings for a house he was building only to find out that none of those working with him could read the drawings. So he described the project through speech and hand-and-body gestures. He also developed a physical model of the building to communicate his ideas. Since then, despite the advancement of various computer programmes, models have continued to be a dominant tool of Jain’s practice. “We use every possible tool available. Even various computer programmes, like others do. But for us, communication and developing ideas together is everything. And here the model is often the most useful. Thus, this essential want of an inclusive mode of communication, combined with my earlier experiences of drawings being useless, has led to how we work.”

Work for Jain begins with his first visit to a site. He doesn’t just conduct a survey of it. He builds, as he says, a relationship with the site, just like one would with one’s wife or friend. “Sometimes just one visit is enough, while sometimes you need to visit it a few times,” he says. The survey becomes an intimate understanding of what he calls its latent potential. “When a wild dog rests at a particular spot, it surveys the land and develops a three-dimensional sense of it. Otherwise, it can easily be attacked. It is both at rest and attentive—at a neutral space. This is what we aspire to do as well—to reach this space of neutrality. It, however, takes time to develop such a relationship,” he says.

The architect’s work has come to be most appreciated for its sensitivity to the landscape of the area. Often raw materials available at the site become the project’s primary building blocks. He summarises his approach in one phrase: the path of least resistance. “The lay of the land, climatic forces, materials available—we take all these forces of the land and nature into consideration and build something that is the least resistant to them,” he says. So in 2003, when he had to build a reading room for a house in Nagaon, he simply wrapped a fabric around a timber frame that was added to the existing structure. This allowed light and air to easily pass through, and an ancient banyan tree adjacent the extension protected it from rain and sun. In 2008, he helped develop an ‘open’ building in the heart of the city. An existing house on a narrow road in Bandra’s Pali Hill was re-aligned to open on to a community garden. All that provided this house privacy and a sense of enclosure were trees from the garden, wood-screens, planted trellises, glass and curtains. Jain is currently building a 70-foot highrise on Bombay’s Napean Sea Road that, unlike other structures and highrises in the city, will not keep the rain away but invite it. “Bombay receives a large amount of rain and most people build structures to resist it. We, however, always work with the natural surroundings and elements of the area,” he says. As Jain explains, metal shots or metal power will impregnate the building’s concrete. This will give the building a unique hue that will be slowly transformed over the years as its exposure to rain increases. “Unlike other buildings, this will never have algae forming on it. It will not ever require whitewashing or painting. Just like human skin that ages and develops over the years, this building’s beauty too will increase and transform itself naturally. Simple,” he says. According to Jain, the building’s walls will be as sturdy and won’t suffer water-leakages like any other building.

Since he moved to Alibaug 16 years ago and set up his practice, Jain has chosen a wide variety of projects. He says he picks what he finds interesting and where the client is willing to experiment. So while some of his current projects have a large-budget, like the highrise on Napean Sea Road and the construction of a workspace for a Japanese weaver near Dehradun, there are also smaller projects he is working on. Recently, a local school approached him to build four classrooms but within a budget of Rs 20 lakh. He not only accepted the offer but has already come up with a suggestion. The classrooms, somewhat like the enclosure he is currently sitting under, will be built with tin sheets and a network of pipes for support. Although, he concedes, there would be a limit on its longevity as a result.

He states that no bricks or concrete will be used because of the low budget. However, he quickly adds, “You should remember—a budget does not limit you. It is a factor, just like the landscape or the local materials available. You need to find the path of least resistance.”