From the fifth instalment of Knausgaard to a new novel by Julian Barnes, from Jhumpa Lahiri to Thomas Piketty — book your year now 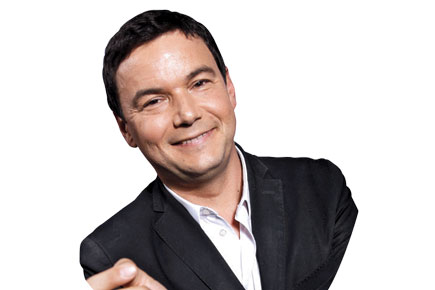 Is an intimate study of the evolution of a mischievous, fun-loving boy from Porbandar into the Mahatma. The chronological text and accompanying photographs bring out Mohandas Karamchand Gandhi’s unique complexities—the man’s failures and successes, the intimate relations he shared with his contemporaries, and the particularly difficult one he shared with members of his own family.

IN OTHER WORDS
by Jhumpa Lahiri
(February, Penguin)

Written in Italian, this book investigates the process of learning to express oneself in another language, and describes the journey of a writer seeking a new voice.

AN ECONOMIST IN THE REAL WORLD: THE ART OF POLICYMAKING IN INDIA
by Kaushik Basu
(February, Penguin)

The art of economic policymaking viewed through the lens of Basu’s two- and-a-half years as the Centre’s Chief Economic Advisor.

PAKISTAN: BETWEEN MOSQUE AND MILITARY
by Husain Haqqani
(February, Penguin)

Offers an alternative view of political developments in Pakistan since 1947, and this new edition includes a preface by the author.

THE BOSE BROTHERS: AN INTIMATE MEMOIR
by Sisir Kumar Bose, edited with an introduction by Sumantra Bose
(Winter, Aleph)

A first-hand account of the private and public lives of the Bose family of Bengal—with its famous son Netaji Subhas Chandra Bose—and its role in India’s struggle for freedom.

CHRONICLES: ON OUR TROUBLED TIMES
by Thomas Piketty
(April, Viking)

Tackling a wider range of subjects than he did in his 2013 bestseller Capital in the Twenty-First Century, from productivity in Britain to US President Barack Obama, his new book comprises his best writings for the French publication Liberation over the past ten years or so.

THE BURDEN OF TOLERANCE
by Pratap Bhanu Mehta
(Summer, Aleph)

A rumination on the challenges being posed to the idea of tolerance in India. It examines some conceptual confusions over the idea and the ways in which these distort its practice.

THE EVILS OF EMPIRE: THE TRUTH ABOUT THE BRITISH IN INDIA
by Shashi Tharoor
(Summer, Aleph)

Tells the real story of the British in India—of how, from the arrival of the East India Company in 1757 to the end of the Raj in the mid-20th century, Britain’s rise was financed by its depredations in India.

THE RISE AND FALL OF NATIONS
by Ruchir Sharma
(June, Penguin)

Shaped by his 25 years travelling the world as an analyst of economies from an investor’s perspective, and enlivened by his encounters with presidents, tycoons and villagers from Rio to Beijing, Ruchir Sharma rethinks the dismal science of economics as a practical art.

A bold analysis of why the Indian state has failed to live up to the promise made long years ago at the stroke of the midnight hour.

SWIMMER AMONG THE STARS: STORIES
by Kanishk Tharoor
(January, Aleph)

Stories in this collection reveal an extraordinary writer whose tales emerge from a tradition that includes the creators of The Arabian Nights and the Kathasaritsagara, Italo Calvino, Jorge Luis Borges, Angela Carter and other masters of fabulist, surrealist and magical short stories.

THE NOISE OF TIME
by Julian Barnes
(January, Jonathan Cape)

His first novel since the Booker- winning The Sense of an Ending, it is a story about the collision of Art and Power, about human compromise, human cowardice and human courage.

The author of the internationally acclaimed The Yacoubian Building is back with his third novel. This one is about a culture clash between the wealthy European elite and their Egyptian servants. Al Aswany has been hailed by The Guardian as ‘among the best writers in the Middle East today’.

SHYLOCK IS MY NAME
by Howard Jacobson
(February, Hogarth Press)

The British novelist’s version of The Merchant of Venice bends time to its own advantage as it asks what it means to be a father, a Jew and a merciful human being in the modern world.

SOME RAIN MUST FALL: MY STRUGGLE (BOOK 5)
by Karl Ove Knausgaard
(March, Harvill)

The fifth instalment from ‘Norway’s Proust’ sees the author aged twenty as he fails to make any impression at a writing academy, falling into alcohol abuse, infidelity and shame.

The author of How Proust Can Change Your Life returns to fiction with the question: what does it mean to live happily ever after?

Aravind Adiga returns after his 2011 novel Last Man in Tower, with Selection Day, described by his UK publisher ‘as sensitively observed as The White Tiger was furiously brilliant’.

The latest novel from the author of The Shipping News and Brokeback Mountain. Set over three centuries, an epic story of two illiterate woodsmen from France who emigrate to the New World in the early 17th century. This is Annie Proulx’s ‘Moby Dick’ say her US publishers.

A new novel by the master of French crime-writing and author of the acclaimed Alex.