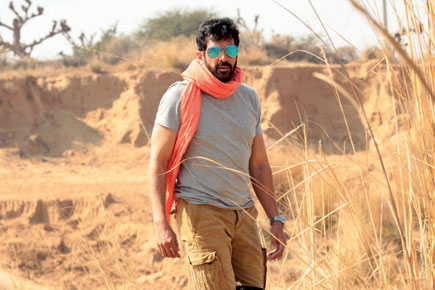 For the past few years, Salman Khan’s Eid releases have been no less than a celebration. Khan’s machismo, unbridled energy, and his bratty-yet-charming ways magnetically draw in the audience despite film critics running down most of his films. From Wanted to Kick, in the past six years, every Salman film has been redefining the term ‘superhit’, not only for the money it earns but also for the never-seen- before fan frenzy. And this year, once the first teaser of Bajrangi Bhaijaan was out, its fate as a blockbuster seemed predestined. However, amidst all the frenzy, the director of the film, Kabir Khan, has a strange calmness to him. It is almost as if the filmmaker is not part of the movie at all, and he is just another member of the audience who will watch it in a theatre and decide for himself the film’s merit.

Khan knows the fate of Bajrangi Bhaijaan is sealed. “I know for a fact that the movie will do well. So there isn’t pressure as such. However, I want to see the extent to which this film will go and how much more it will attain.” He assures us that this is a more wholesome film as compared to his previous one with Salman Khan: Ek Tha Tiger. “[That film] had a core to it, but this is several steps ahead. You will see Salman in a manner you have never seen him before, and I am not just saying this for effect.”

Kabir Khan, over the years, hasn’t changed much as a person. No matter how many successful films he has made or how many big stars he has worked with, he always has his head firmly on his shoulders. He has a warm and infectious smile all through the Open interview. His eyes light up every time we speak about his biggest passion: travel.

The interview takes place at his Andheri office, where he has just locked the edit of his film. There is more work to happen, but he seems at ease. He relates how the story of the movie came to him. KV Vijayendra Prasad, a famous writer from the South, father of filmmaker SS Rajamouli (director of the upcoming movie Baahubali ) reached out to him with the story. “Honestly speaking, I wasn’t aware of who he was. But then I realised he is Rajamouli’s father. So then I asked him why he isn’t giving this story to his son and why he wants me to make it. He insisted that this story matches my sensibility as a filmmaker. Finally when I met him and he narrated the story to me, I was awestruck. It was then that I really wanted to make it,” says Kabir Khan.

After Bajrangi Bhaijaan , Khan will work on his long-awaited Saif Ali Khan starrer Phantom. “Now it will be more challenging to see how this one fares, because unlike Bajrangi, I have really pushed the boundaries of filmmaking for Phantom.” He doesn’t reveal much about the film’s plot, but insists that this form of storytelling is quite new to Bollywood.

As a filmmaker, Khan is known for exploring the social fallout of Muslim identity politics in our times. His movies have sometimes aimed at changing the attitude of non-Muslims towards adherents of Islam. For instance, his film New York, a milestone for Bollywood, was one of the first Indian films to address the subject candidly and intelligently. In it, he turned the arclights on racism and the treatment of innocent suspects in US detention centres after 9/11. The film’s message was blunt and direct, an effort to tell people that there are no good or bad Muslims. There are only good and bad people.

“Through my films, I am always trying to send out a strong message,” Khan admits. He recalls how, after the film opened at the Cairo Film Festival, an Arab journalist who had watched New York stood up and congratulated him for avoiding clichés. He told him how it was the only film with the backdrop of political Islam and jihad in which the word ‘Allah’ was not uttered even once and there was not a single shot of a man offering prayers. “It took a chap from Egypt to tell me that, but I had gooseflesh.”

With Ek Tha Tiger, he moved to the mass entertainer format, something many directors inevitably succumb to. There were signs of Hindu-Muslim politics in it, but subtle, and watered down to a great extent. He took on the much-hackneyed RAW-ISI and India-Pakistan angle, but left out the jingoism that Bollywood revels in. In an interview then, Kabir had said, “The way I have made Ek Tha Tiger, 90 per cent of the people will be entertained by it, while the 10 per cent will get into the layers beneath.”

Kabir hopes that is the case with his next release Bajrangi Bhaijaan too, that an attuned part of the audience will catch the political subtext. “The film is trying to deal with certain negative politics that all of us are victims of, that all of us face today, and the film is an attempt—in a very nice, heart- warming, humorous and engaging manner—to narrate a story that overcomes this.” The affable director is on guard when you probe the actual plot of his new film. He speaks about his equation with Salman Khan: “Salman and I weren’t on the same page throughout the making of Ek Tha Tiger. We both had different opinions, different ways of looking at scenes. However, by the time Ek Tha Tiger ended, we became friends, and when we started shooting for Bajrangi it was the smoothest ride ever. We were always on the same page, thinking alike.”

Khan isn't of a filmi khandan or lineage, and unlike most Hindi filmmakers, did not start out as an assistant director to a known director.

He is the son of Rasheeduddin Khan, a founding professor of Jawaharlal Nehru University. His mother Leela was the one who first introduced him to international cinema. He worked in the media and spent quite a few years with TV journalist and family friend Saeed Naqvi. Khan joined Naqvi after his training as a cinematographer at Delhi’s Jamia Millia’s Mass Communication Research Centre. Saeed, a well-known journalist, would tour the world interviewing different political leaders. Accompanying him, Khan managed to see different countries. It’s where his fetish for travel was born, which would then become a motif in his movies. “In four years, I had travelled around 50 countries. It was the best training ground for a youngster like me who got to see world leaders up close and personal. It was there that I learnt the art of getting under the skin of the politics of a country.”

After his stint with Naqvi ended, he decided to look for work independently. He worked on his first documentary as a cinematographer, Beyond the Himalayas for The Discovery Channel, when he was 24. He was on the road for three months, travelling to Central Asia, China, Tibet, Mongolia and Nepal. The documentary, directed by Gautam Ghosh, strengthened his love for travel and his connections with a world far beyond the confines of his own homeland.

The first documentary he directed was The Forgotten Army, based on Subhas Chandra Bose’s Indian National Army. He was all of 26 when he convinced Captain Lakshmi Sehgal and Gurbaksh Singh Dhillon to help him trace the route of Bose from Burma. It was a hard task, but he eventually managed to pull it off. The documentary won him many accolades and strengthened his pursuit. Later, he shot another documentary called The Taliban Years in Afghanistan. “I went there in November 2001, when the Taliban collapsed. We spent a couple of months there, trying to recreate the era. I also did a film called The Titanic Sinks in Kabul during that time.”

With a background like this, it is tough to imagine Khan would ever enter the glamorous and mainstream world of Bollywood. He smiles at the thought even now. “I took the decision to tell my stories in the mainstream space because that is the only powerful medium in this country. Foreign audiences were seeing my documentaries and I did not want to preach my stories to those people who were already on the same page. And by then I was also sure about the fact that I wanted to get a real context and believable content to mainstream cinema.”

He penned the script of Kabul Express which was again loosely based on the experiences his friend Rajan Kapoor and he shared in Kabul. The film, which encapsulates a period of 36 hours and the adventures that five people of different nationalities go through in Kabul, captured the essence of post-Taliban Kabul and helped him get a foothold in Bollywood. He had the backing of India’s foremost production house, Yash Raj Films, which gave him a three-film contract.

The city has remained a character in his films—from Kabul to New York and now Srinagar in Bajrangi Bhaijaan, followed by Beirut in Phantom. And each time, geographical locations and socio-economic and political conditions underline the narrative. “It is always a bigger joy shooting in open environs—as opposed to a set, which is restrictive.”

Bajrangi Bhaijaan was shot in various locations in Kashmir: Pahalgam, Aru, Sonmarg, Thajiwas and Zojila. Shooting in Kashmir, he says, was one of the best decisions he made. And he encourages more filmmakers to take this step. “If Salman Khan can shoot there, anyone can. There are loads of infrastructural problems and there can be improvements. But the shooting of a big-budget film like this is proof that things are changing in the Valley.” If he had his way, he would want to release the film in the Valley as well, but its lack of cinema halls is a hindrance.

Kabir Khan may have turned mainstream, but as a filmmaker, he asserts his essential outsiderness. He keeps a low profile, happy living in his shell and revealing himself to the world mostly through his work. However, after the release of both his new films—Bajrangi Bhaijaan and Phantom—he is hoping for a long break. “Or else [my wife] Mini might just divorce me.” Kabir and Mini Mathur, actress and TV show host, incidentally met when they had both gone to decline a TV series. However, after meeting each other there, they decided to do the series, and by the end of it, they knew they wanted to spend the rest of their lives together. Khan smiles and says, “Mini has been asking me for a five- month break from my work; I’m saying ‘two months’. I guess we will negotiate,” he chuckles. For now, there is a potential blockbuster to look forward to.