Richard Bartholomew, as a compilation of his writings reveals, was an art critic who didn’t let his friendships with the top artists of his time suppress his voice 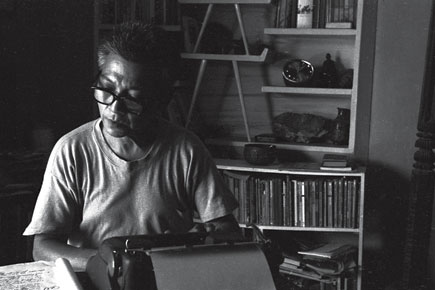 Richard Bartholomew, as a compilation of his writings reveals, was an art critic who didn’t let his friendships with the top artists of his time suppress his voice


A Burmese émigré who had arrived in India in 1942, Richard Bartholomew entered the literary-cultural scene when studying English literature at St Stephen’s College, and then as a teacher of English at Delhi’s Modern School from 1951 to 1958. A poet and a photographer himself, he started writing and publishing as an art critic in 1955. From the late 1950s until his tragic and sudden death from a stroke in 1985, Bartholomew’s was the most important critical voice on the Delhi art scene, and he among the most important art critics in India. From 1977 till 1985, he took on, in addition, the onerous task of institution building as secretary of the Lalit Kala Akademi.

And yet, until 2009, when his son Pablo Bartholomew, himself a photographer, put his photographs together in a show and a book called The Critic’s Eye, Richard Bartholomew’s was not a name I knew. The Art Critic, self-published by Pablo after a difficult, muddled, often painful process that ended up taking 27 years (and which he gives partial voice to in a remarkably honest afterword), finally brings to a contemporary readership a definitive collection of Richard Bartholomew’s critical writings. Voluminous at roughly 200,000 words (edited down from the original 300,000), this is an ‘art book’ like no other. Opinionated, often provocative, but always thoughtful, Bartholomew’s writing has the rare virtue of combining the survey and the longue durée with a marvellous immediacy, giving the present-day reader a privileged sense of modern Indian art ‘as it happened’.

The liveliness of his prose is also based on his ability to straddle worlds: while treating art with all the seriousness of a national mission, he constantly strives to translate what is essentially high culture into something that ordinary people—middle and upper middle-class readers of The Indian Express or The Times of India or Thought magazine—ought to be able to connect with, enjoy, and even if possible own. Sample: ‘The best thing about… ‘Graphic Workshop 1974’, organized in Baroda, is that each print has been brought out in a small edition of 50… [enabling work to be priced] at Rs 50 which is the price of a whiskey bottle or a cotton sari.’

It is a sensibility that can only have come from a critic who was on familiar, if not intimate, terms with many players in the art world—and yet wrote about it not for the coffee-table book or the rarefied academic volume but for the educated layperson. And also, perhaps, only from an art world still un-feted (and un-buffeted) by the market; Richard’s writing, writes Geeta Kapur, ‘matured on a typewriter in modest dwellings that neighboured the artists’ equally modest studio-apartments’.

Bartholomew himself saw his role with fierce clarity. ‘The critic who wishes to be articulate must be prepared to discuss reviews with artists; he must be at home in the artist’s studio and he must be an integral part of the art movement. If there is no art movement, he must try to foster one,’ he wrote in Cultural Forum in 1959. ‘It is imperative that he should have the respect of three institutions: (1) the public; (2) the artist; (3) the editor. This triple test disqualifies many for the vocation of criticism, for criticism is a supreme test of integrity.’

The book provides ample evidence that Richard held himself to these standards. He was close to several of the painters he wrote about—Ram Kumar, whom Richard and his wife Rati (then Batra) befriended at St Stephen’s College; Kanwal Krishna, having taught alongside him at Modern School (where Geeta Kapur first encountered the two of them as teachers and whose art room Krishna ‘treated for all the world like an artist’s atelier and evening hub’), and his wife, the artist and printmaker Devyani Krishna; A Ramachandran, who remembers Richard and Rati arriving at his barsati door to invite him and wife for dinner at their place, also in Jangpura; MF Husain; and Satish Gujral. And yet these are artists whose work received Richard’s most scrupulous honesty. Sample three statements on Husain’s paintings: in 1961 Richard can write, ‘As my acquaintance with Husain grows I begin to marvel at his virtuosity. Husain is a careless painter often; he is a facile painter sometimes; but Husain is a painter with a carefully selected repertoire, always.’ In 1965, he can write, ‘The 23 Husain drawings in this exhibition are good drawing-room pieces.’ And in a long essay on Husain published in a 1972 volume, he can make the following marvellous observation: ‘Men put so much energy into words, even if they do not believe all that is said. Husain puts that energy into paint.’

The integrity that Bartholomew brought to his work drew reactions in kind from the artists themselves. Here is Richard writing about Satish Gujral: ‘And when I criticised him for the want of finesse and conviction in the lettering and the slogans of his terracotta pieces of 1969-70, he had the heart and the good sense to take it in his stride, though it hurt. “A man doesn’t do what he has succeeded in doing all the time,” [he said].’

He draws analogies and references from far afield, from literature and poetry most of all, but also in vivid prose, from the natural and cultural environment of his adoptive country. Here he is on Raza’s Indian palette: ‘His colours are those of the Banaras brocade, the Gujarati manuscript, the blazing intensity of the Indian summer with its glory of the gulmohur and the laburnum.’ Reading Richard’s writing, in fact, one has not the slightest sense of the outsider’s trepidation, or desire not to offend. On the contrary, one is pleasantly surprised by the forthright way in which he broaches, for instance, such presumably sensitive subjects as Bengali dominance. In a 1959 piece called ‘Art in the Shadow of Official Patronage’, he took the Lalit Kala Akademi to task for several things, including its institution of a tripartite division of art submissions for a prize into ‘oriental, academic-realistic, and modern’. ‘Manifestly this is a move to provide sanction to the decadent and dying Bengal School, for which Mr Barada Ukil, the Secretary, and Mr DP Roy Chowdhury, the Chairman, must necessarily have much sentimental attachment… it is pertinent to point out that three centres of art instruction in this country are being managed by Bengali artists, by Mr BC Sanyal in Delhi, Mr Bishwanath Mukerji in Hyderabad, and by Mr Chintamani Kar in Calcutta. The Curator of the National Gallery of Modern Art, Mr Pradosh Das Gupta, is also a Bengali. For better or for worse, there is the influence of Bengalis at the top official places in Indian art today. The general ambivalence, therefore, is understandable.’

And yet, there is no slanderous gossip here, no personal slurs. What there is is a deep-rooted, not always rational, distaste for the ‘nostalgia’ and ‘romanticism’ of the Bengal School. But even this avowed critical disdain for nostalgia and romanticism is never allowed to swamp his instinctively positive response to a body of work. About Amrita Sher-Gil, for example, he writes with empathy rather than dismissal: ‘The pensively stanced figures of the countryside in a Sher-Gil painting breathe a romanticism that is born of the regret that these things were passing away.’

It is impossible to do justice to this vast volume in a short review. But suffice it to say that Bartholomew is attentive to the smallest detail in a work of art, writing passionately about colour and light and form, the stroke that creates the hunch of a back—while never shying away from the big picture questions that you almost rarely hear asked anymore: Is modern Indian art merely imitative of Western art? What does its Indianness consist of? What is the role of State patronage? You may or may not agree with his answers, but it is more than sufficient pleasure to discover so fine an interlocutor—and one you did not know existed.