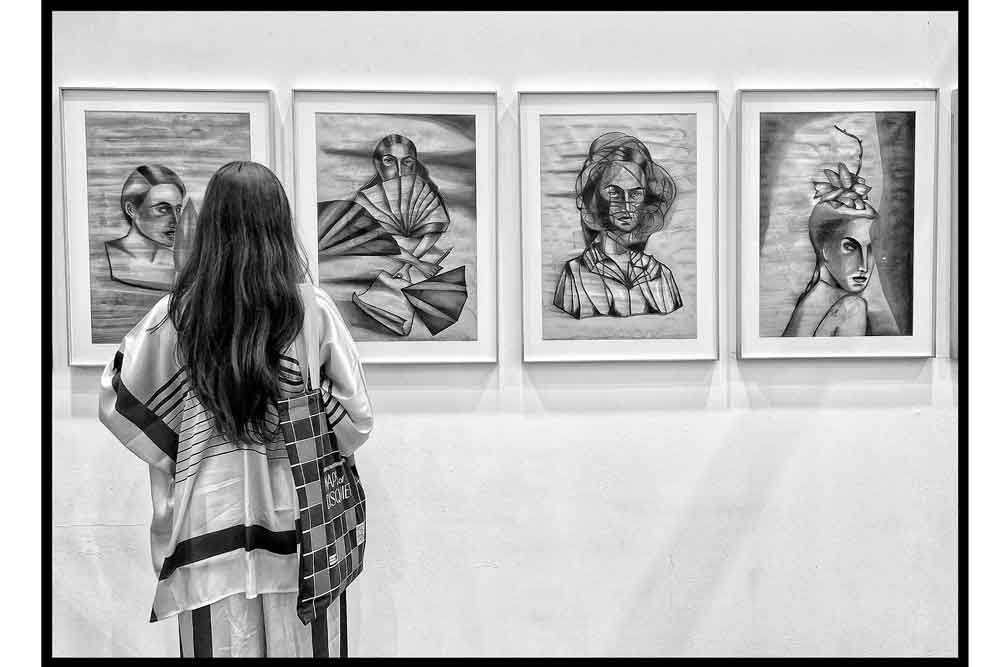 
One of the entrances to the India Art Fair pavilion lead one directly into the embrace of a work titled Adequate and Suitable by Maya Jay Varadaraj. This acrylic on canvas work includes two large paintings side by side. In one a woman sits on a chair, while a man holds her head to his heart and she encircles him around the waist. Their faces are unknown to us, as only the eyes of the woman are visible. Their pose seems to be one of sorrow at the world and solace in each other.  In the other canvas a couple (perhaps the same couple) stand with their backs to the viewer, their hips touching, showing they share an obvious intimacy. Their pose this time is more relaxed, more at ease in their world and the world around. In this canvas one can also see just the hint of a baby’s head in the frame. The man is perhaps carrying their son. These black-and-white works arrest the viewer for their storytelling possibilities. Are these new parents? Are they lovers in the first image and parents in the second? Has the arrival of the baby been the fulfilment of a long-held dream?


This work by New York-based Varadaraj proves what art can do. The viewing and appreciation of art is highly subjective. But every viewer will find that singular painting or sketch or sculpture that speaks directly to him/her. That single work will linger in the viewer’s mind and will crop up in the most unexpected moments. That work will provide respite and repair for much longer than the duration of a weekend.

The ongoing India Art Fair, Delhi, might have been postponed from January to April this year, and while the sun might be baring its teeth, spirits have not been dampened. The Thursday preview saw milling crowds, enthused artists and hopeful curators. The 2022 edition of the fair showcases 77 exhibitors, including 63 galleries and 14 institutional participants, such as the Kochi Biennale Foundation, Chennai Photo Biennale Foundation, Serendipity Arts, among others.

The highlight of the fair is always variety above all else. At a single venue one can stare into the almond eyes of a Jamini Roy painting preserved under muted lights; marvel at the colour palette of a Maya Burman; be chilled by Rameshwar Broota’s black and whites; be tickled by a large work that seems to show a naked man enjoying a vast meal alone at a breakfast table; scrutinise the anatomy of a single dandelion under artist David Young’s lens; and enjoy the subtlety of a Nandalal Bose. It is often the sheer quantity of art and art processes, and the variety in the aesthetics and sensibilities of artists that distinguishes the India Art Fair above all others.

Speaking a few days prior to the opening of the India Art Fair, Jaya Ashokan, Fair Director spoke about the importance of the fair this year and how the delay allowed for new opportunities. She said, “In terms of just the production aspect of it, of course, it has been complicated because we have had to reshuffle and then go back to the exhibitors.  But it has also been pretty interesting for us internally as a team because it’s really given us time and space to reevaluate a few things, just in terms of our approach, whether it be to collectors, or whether to include, for instance, performance art. It’s given us an opportunity to  reset almost and go forward, which I think was much needed.”

She also emphasised the importance of the fair in terms of one-on-one interactions. She said, “I feel it is a meeting place for not only business, but also friends and colleagues from the community at large. There is no other big umbrella event like this that brings collectors and artists all together from different cities. We decided to postpone it because we just feel that for the cultural calendar it is a very important thing to have.”

The joy of the fair is always to see artists in the company of their own work and the work of their contemporaries. This year the fair had a distinct South Asian feel as there were only four international galleries compared to the usual 14-15 that have participated in previous editions. This also meant that many of the artists could be spotted speaking to viewers and prospective buyers, whether it was a veteran Anjolie Ela Menon or the young sublime artist Anindita Bhattacharya or the well-known Mithu Sen.

The focus on South Asian art also ensures that a viewer can see a gilded Pichvai and a Riyas Komu sculpture in the same space. Ashokan said, “This year we are highlighting folk traditions by contemporary practitioners of folk traditions who have been instrumental in carrying these traditions forward. We are levelling this hierarchy that’s often played out, how we view these so-called arts and crafts, and bringing a wider cross section of them. So, people can view them in the same setting as contemporary art in the halls.”

The importance of the fair is not only in terms of artists selling their works but also in creating an art-literate audience. In order to build an ecosphere for this, the fair is offering year-round cultural programming, which includes targeting the non-metro cities where most of the galleries are concentrated. Ashokan said, “One of our focuses this coming year, post the fair, will also be to build audiences in Tier 2 and Tier 3 cities by doing one-day events or two-day events, physically, if we can. We see that there’s a huge growing interest from people who digitally log in from smaller cities.”

For now, the fair continues to occupy a leading position in the cultural calendar as it is a one-stop place to admire art, covet art and meet and greet artists, curators, and most importantly, fellow viewers. 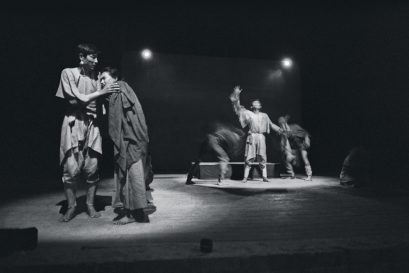