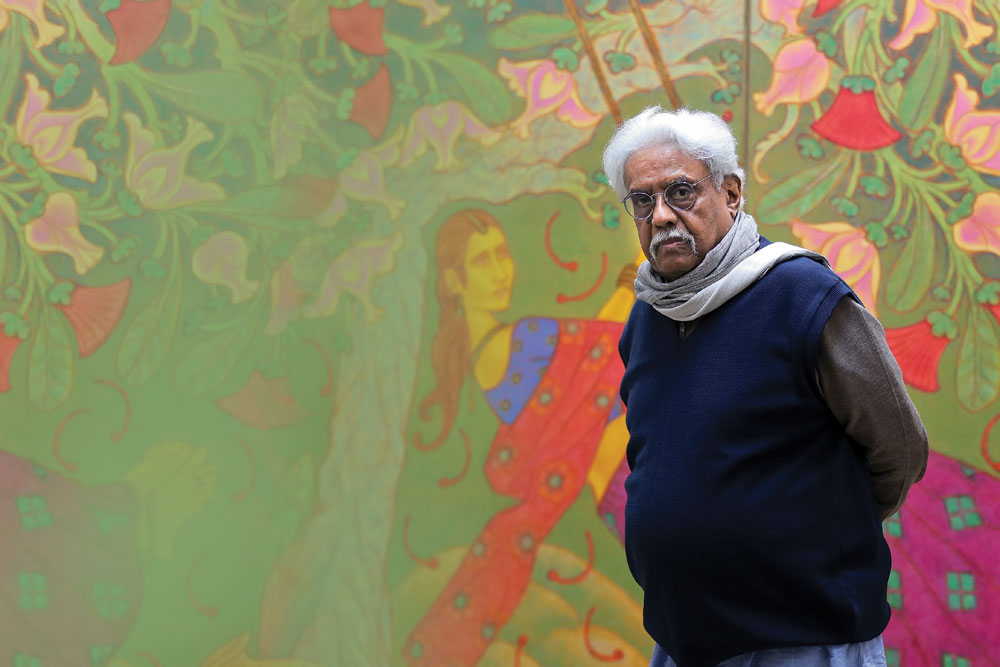 
A RAMACHANDRAN isn’t interested in replicating reality when he paints. Instead, the Padma Bhushan awardee believes in the approach taken by folk artists across the country who do not follow what he terms the “European system of copying what we see.” Over the phone, the 86-year -old explains, “We are looking at something, taking the form and transcending it beyond its first appearance. That means idealising. In a sense, expressions of Indian art, are all idealised versions of human beings, birds, plants, trees—for example, an exaggerated form of a female figure. So, to me, art is not equivalent to what you see. It is something that you don’t see in an ordinary world—the inner quality of the form.”

Ramachandran’s preference for a homespun aesthetic is a long-standing matter. After four years of training at Santiniketan, he was quite happy with what he had learned. He says, “I never felt like going to England or France or somewhere to study, like some of my friends and colleagues.”

In a different avatar, he has been a prolific illustrator of children’s books inspired by traditional art forms such as Sanjhi paper cuts and folk artists like Jivya Soma Mashe who practiced Warli art, as well as a professor of fine art at Jamia Milia Islamia for over 30 years. The Vadehra Art Gallery, long-time supporters of his art, are showing a collection of his paintings in Delhi titled Subaltern Nayika and Lotus Pond featuring some of his best-known motifs—the people of rural India and the ecosystems that surround them.

One half of the collection is named after the Nayikas mentioned in the Natya Shashtra—eight variations of a woman in love such as a woman en route to meet a lover or one furious with her love. “Subaltern” hints at the Bhil women who served as Ramachandran’s models for these works. He laughs when asked how he became interested in the Nayikas. It isn’t the first time he’s explored the idea in his work. “I encountered them when I was a student. I am only making fun out of it. I am not saying anything seriously,” he says. He paints a woman who may be waiting for a bus, but to an imaginative mind, it may appear she has fought with her husband and run away. Jovially, he says, “You can bring a very popular kind of imagery and give it a twist with a present day situation.” Sobering up, he points out that concepts such as those of the Nayikas may not have space in the lives of ordinary people like the Bhil women. But to him, pictorially, they bring to mind the Nayika archetypes.


Whether it is a leaf or a human body or an animal—they all have a structure, their skeletal system, their muscular system, which condition the external appearance. Once you understand the internal structure, what you make will be correct, says A Ramachandran

These paintings are visually arresting, each featuring a local woman in a vibrant saree whose head and face are covered to varying degrees, and whose expressions and body language differ from one another in a way that has the viewer looking again and again. A rendering of the artist makes an appearance in every painting as part of an insect or an apparition who subverts the aesthetics and the atmosphere of the paintings. Remove it, and one is staring at an altered work. A characteristic feature of his art, the spectre keeps the viewer guessing—is it a demon, protective spirit, voyeur, or simply the mark of a maker?

Each painting prominently features a different flowering bush or tree found in the area and holding some significance to the tribe. He explains that one of these, the Shimbul tree, is part of a ritual the people do for their god. A bundle of worship-related items such as a coconut is hung in the tree, which is full of thorns. The people must then climb the tree to retrieve it. Another, the mahua tree, is valued for the wine made of its flowers.

He has spent years visiting villages around Udaipur and painting the people there, spending time with the Bhil tribe, visiting the lotus ponds in the vicinity. But he started out painting the Lohars, a nomadic community of people living close to him in Preet Vihar. In the ’70s and early ’80s when the area was less built up, “many of these nomads were living here, near the roadsides, with their bullock carts and things. You couldn’t make out now if you came here.” Ramachandran encountered the Lohars at a point of crisis in his career where he no longer wanted to paint politically charged paintings. Reminiscent of classical figures to him, the Lohars inspired his most famous work, Yayati (1984-86). Seeking to create “something much deeper” than he had before, he chose to tell the story of modern man through Yayati’s character in the Mahabharat—a book whose characters and images he finds resonate even today, possessing that singular “dimension.” He wanted to demonstrate how we as consumers are never satisfied, destroying the air and water for our own short-sighted interests. “These are major issues of our modern life, so to me, Yayati was a symbol of the modern man, eternally yearning for endless pleasure,” says the artist.
At the start of his career, he had been an expressionist who painted political art. But after the 1981 riots, he could no longer condone painting “gruesome” things. He turned to Kerala murals and traditional folk traditions such as Madhubani and Warli for guidance, and he found that these classical traditions shared an interesting feature—“They’re all structured with lines, not with light and shade like in European art. Whether it is Ajanta or Madhubani painting, there are fine lines defining the form and the subtleties. In Ajanta, you see realism, but you see line-based realism.” It was here that he discovered the “Indian art grammar” evident in his style.

THE OTHER HALF of the exhibition is a series of paintings of lotus ponds where the gaping mouths of the flowers are luminescent, the arrangement of the flowers is a nod to the seeming chaos and biodiversity of living systems. When Ramachandran began painting lotus ponds, his early renderings were “lyrical.” He started with a romantic notion of a lotus pond, but the more time he spent around them, the more his understanding shifted. One reason his perception changed was because of a visit he made to Nagla, near Udaipur, where he found a Shiva and Parvati temple. Close by, there was a beautiful lotus pond. He says, “Most probably, the craftsmen of that period who were working on the temple must have seen the lotus pond and got inspired by it. Because there are so many variations of lotus motifs in the ceilings and the pillars. So, that struck me—the lotus pond visible in the vicinity gives you the immediate relationship which I never thought of. We see stylised [architecture] and we think it has no connection with nature. But it has a deep connection with nature.”

After that, when he returned to a lotus pond, he saw it very differently with various possibilities of stylisation. He saw beyond the flowers to the waterbirds, fishes, snakes and insects found in the pond. It was no longer simply a beautiful view of a landscape—it was a universe in itself. He kept evolving as he painted the ponds at different times of day, in different seasons, and in different styles. But he doesn’t see the gradual fading away of the lyricism in his early efforts as entirely intentional. He finds that the evolution of an artist happens only in the course of his work. He says, “I can’t write a manifesto and then paint. You have to paint. And paint. And paint what is beyond that.”

Some of his philosophy of art can be traced back to Santiniketan. But he didn’t arrive there intending to become a painter. As a small child, he had been a great admirer of Malayalam writers. Some of his teachers were ahead of their time and read progressive writers such as Basheer to their students. “Those progressive books that people in the family never used to read, I used to buy and hide these books to read myself,” he says. After completing a Masters in Malayalam Literature, he won a scholarship to study Kerala mural art at Santiniketan. Serendipitously, the Kerala murals became a path to Ramachandran’s development as an artist.

Several decades later, he continues to name his Santiniketan instructors as the most important artists he’s learned from. “The difference between Santiniketan and other art schools is that Santiniketan never taught art,” he explains. For 15 days at a time, the students would learn a medium of art such as watercolour or fresco or sculpture before moving on to the next module. “The basic idea was, while the students were learning the techniques, they should independently go out and sketch in nature and develop their sense of drawing, sense of structure,” he explains. It was in independent study that the teacher’s role proved crucial.

Ramkinkar Baij taught him that every part of nature had a structure of its own. “Whether it is a leaf or a human body or an animal—they all have a structure, their skeletal system, their muscular system, which condition the external appearance. Once you understand the internal structure, what you make will be correct,” the artist elucidates. He warns that if one only comprehends an object’s external appearance, the result will be clumsy or inauthentic. As he painted, he found this held true for everything from a blade of grass to a tree to a girl to a movement of cloud or water. He is clear that he does not paint a person, but the likeness of the person through the structure of his body and his relationship to his environment. He doesn’t ascribe to the studio model of painting which he sees as a tableaux lacking nuance.

Referring to a criticism levied at Amrita Sher-Gil’s work, he comments on the way she arranged her models. He argues, “Many of the times when you really look, Indian women may not even have sat like that. Village women sit in a very different way, on their haunches and things. So, that is because she brought that idea from Europe—she structured her models in the way that she wanted to paint. But people don’t live according to what you paint. The important thing is to understand people in their own habitat. That you should get in your work, it is not easy to get it, but many years of practice and your lines will yield that quality.” Nonetheless, he names Sher-Gil as one of the artists he admires, mentioning that she would have reached even greater heights had she lived longer. He points out that European and American influences remain difficult to elude even for artists of the day. “In their galleries, we are facing a similar thing now, but without realising it. We are very much conditioned by the value systems of abroad,” he laments.