The 2001 film has attained classic status for good reason, though breakaway cinema it isn’t. At least not in terms of overthrowing the Grand Hindi Film Formula. 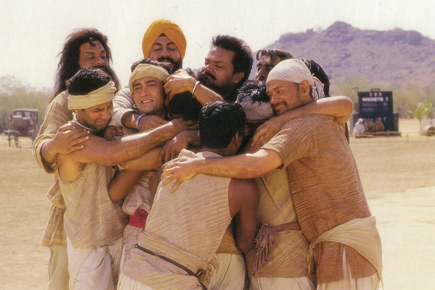 The 2001 film has attained classic status for good reason, though breakaway cinema it isn’t. At least not in terms of overthrowing the Grand Hindi Film Formula.


Make the film that you want to make” was Aamir Khan’s sign-off line to Ashutosh Gowariker along with “Good night” every night while they were shooting in Bhuj, Gujarat, in 2000 for Lagaan: Once Upon a Time in India. Gowariker went ahead and did just that. Made a film after his own heart… and a film that subconsciously (or perhaps consciously, though he may never admit it) followed in the traditions of all the classic Hindi films you can possibly name—must be a subconscious result of all the films that he grew up on and has loved.

So, as Lagaan enters its second decade (it released on 15 June 2001), it remains a film that commands instant recall—the hallmark of a classic. Going by the Oxford English Dictionary, a ‘classic’ is ‘a product or thing of the highest excellence’; ‘traditionally, classic means typical’; a ‘thing that is memorable and a very good example of its kind’ and ‘remarkably and instructively typical’. So, when all those years ago, Indian scribes, audiences and fans of the film described Lagaan as a classic, they erroneously gave it the right epithet. Erroneous because ‘classic’ back then was being qualified with ‘it’s so unlike what we’ve seen in Hindi films’; it’s ‘not typical Bollywood’. It is an example of a mainstream film with aesthetics of a crossover genre, etcetera, etcetera. The fact however remains that Lagaan uses every single cliché from the Hindi cinema book, only treating it differently.

Arguments for the film being different range from the typical Hindi film hero not wearing dhotis to a mainstream film using Avadhi and not Hindi as its language to garner pan-Indian audiences. Gowariker, in Chale Chalo—a documentary on the making of the film —admits to being discouraged by producers to avoid making a period film or a film on sport, especially on cricket. But except for the theme of sport, Gowariker has stuck to the formula. Can anyone think of a bigger mainstream film than the quasi-historical Mughal-e-Azam when it comes to period films and whose popularity still lies unchallenged? And don’t forget that the film was made in old Urdu even while catering to Hindi audiences. As for Lagaan, everything is formulaic—from its treatment, its characters, to the way Gowariker uses music (the sentiments in the songs are universal even while being placed within the film’s context, similar to the manner in which music and dance has been traditionally used in popular Hindi cinema).

Classical in its approach, Lagaan has a beginning (throwing of the gauntlet), a middle (the preparation for the match and the match itself) and an end (the climax, which will end in the win). Javed Akhtar, the lyricist of the film, talks about how the characters of the film aren’t the “normal, Hindi film characters”.

He couldn’t be further from the truth, or perhaps he refers only to the peripheral character artistes comprising Bhuvan’s ragamuffin team. But the main characters are completely stereotypical. The hero, never mind his costume of bundi (sleeveless jacket) and dhoti, is just the regular Hindi film bloke who takes on the villain even as he defies peer pressure and challenges figures of authority (remember the ‘gaon ka mukhiya’ [village headman] and the initial resistance of his friends?).

He’s got a love interest in Gauri (played vibrantly by Gracy Singh), a typical gaon ki gori [belle of the village] who believes in him blindly and will not give any bhaav [importance] to her beloved’s bete noir Lakha (a role which catapulted Yashpal Sharma’s career). How is she different from scores of other Hindi film heroines who have stood by the love of their life?

The hero’s mother (who thinks of the father just as every single mother, widowed or separated, in formula Hindi films does—sans a photograph, making allowances for the time that it’s set in!) is his inspiration, the only person whom he wants to justify his actions to. She, in turn, prays to the Almighty in time of adversity. Our hero thinks only of his beloved and mom before playing the final shot (just as any other Hindi film hero does before he delivers the final punch in the villain’s face).

The hero fights against a declared enemy. Remember Pran, Prem Chopra and Ajit pitted against Shammi Kapoor, Raj Kapoor, Rajendra Kumar, Manoj Kumar et al back in the1950s-mid-60s or even Amitabh Bachchan as the angry young man venting his angst against the system? Bhuvan too will battle and turn the tide around in spite of the fact that there’s a villain within (Lakha) and a villain without (Captain Russell). Best of all, you know Bhuvan will win. You know it the minute he agrees to his opponent’s demands.

He has to win—a formula Hindi film hero Never Loses. Bhuvan is involved with winning even as he goes through the process of it. It’s his life mission like all the other Hindi film heroes—who have to overcome all odds.

But unlike them (who go alone to fight ten goondas), our hero takes his ragamuffin team along. The one-on-one made it immensely watchable. And it’s always a great feeling when the underdog wins. Hasn’t Amitabh made it big on the strength of this image? Shah Rukh Khan’s career would never have taken off if Baazigar hadn’t happened!

Lagaan became big for two reasons: one, Aamir’s eye for detail (read production values; a model but not designer village wherein everything from costumes to colour tones of the desert were in consonance with the mise-en-scène), and two, Gowariker’s scripting and treatment. It is the technical finesse and overtly unusual theme that he deals with that works for Lagaan. ‘The vast majority of the movie is cut and shot in a very straightforward, unkinetic way. Khan has stated he wanted to recapture the human feel of traditional Hindi pics by directors like Bimal Roy and Guru Dutt, sans foreign locations and other trendy hooks,’ wrote Derek Elley in that touchstone of cinema, Variety, while reviewing the film in 2001.

Lagaan plays on emotions (like Dil Chahta Hai or  DCH, which released just a month later), but it’s done with a certain realisation that a hero doesn’t lose (unlike DCH where they win and lose all the time). Every single act in Lagaan is geared towards that win. Roger Ebert of Chicago Sun Times gave the film three-and-a-half out of four stars, and said, ‘The most charming aspect of most Bollywood movies is their cheerful willingness to break into song and dance at the slightest pretext. This film is like nothing they’ve seen before, with its startling landscapes, architecture and locations, its exuberant colors, its sudden and joyous musical numbers right in the middle of dramatic scenes, and its melodramatic acting (teeth gnash, tears well, lips tremble, bosoms heave, fists clench). Lagaan is an enormously entertaining movie, like nothing we’ve ever seen before, and yet completely familiar… At the same time, it’s a memory of the films we all grew up on, with clearly defined villains and heroes, a romantic triangle… Lagaan is a well-crafted, hugely entertaining epic.’ There goes the formula angle again.

Then, there’s big time patriotism… thankfully, it’s not the in-your-face kind of patriotism that a Karan Johar film has inevitably, but it’s underlying through the film. The conflict points in the film don’t arise when they decide to play, but when they’re fighting a villain controlling them externally through his spy! That’s classic Hindi cinema. The villain has been defined from scene one, and the hero is out to vanquish him. Where are the grey tones explored the way they were in Dil Chahta Hai?

In DCH, you don’t know whether our heroes will ever make peace with each other, with themselves, whether a man’s ego will allow him to go claim his beloved (she’s gone off to marry another guy, remember), or whether he’ll ever apologise to his best friend for misbehaving. You don’t know whether our other hero will sit and mope around for the partner he’s lost to death or whether he’ll move on and live life some more. You see all of them growing and evolving as characters. Lagaan is a flat plane. Characters don’t evolve or even make mistakes. They set out to win and do. Simple.

I loved Lagaan then, I love Lagaan now, and most likely I’ll continue to do so in future. That is because I love Hindi cinema, and Lagaan reminds me that it’s alive and kicking!