The Future Is On Track 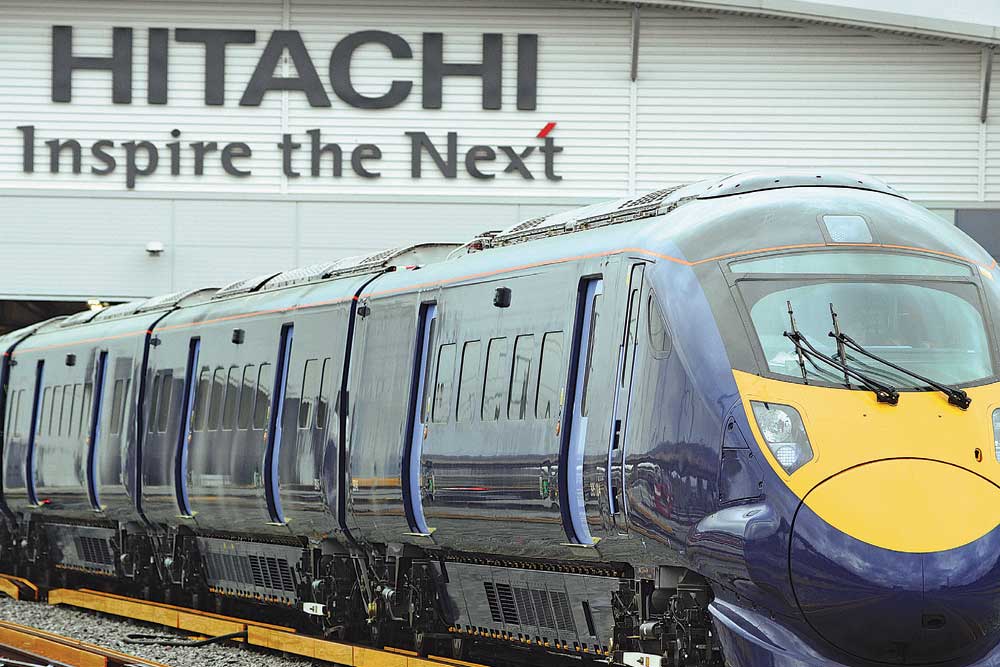 The earlier resistance to change has been replaced by a growing eagerness to infuse technology into virtually every aspect of our daily lives. While governments traditionally have been overburdened by the widening economic gap and inequitable wealth distribution, technology and rapid transportation development are two pivotal factors which offer some terms of a desire for increased comfort and convenience in public and private transport preferences, and the global awareness of alarming levels of air pollution.

Digitalisation is proving unequivocally its unmatched ability to save time and cut costs, in broad basing India’s development agenda, and not just in the transport sector. We are witnessing transformation at all levels – through expectant and informed consumers, performance-driven governments and high growth focussed industry leaders, like Hitachi, who is jointly propelling the nation into an era of dramatic change.

On one end, newer technologies, be it Internet of Things (IoT), Artificial Intelligence (AI), and Robotics are forcing societies to reimagine how goods and services are delivered, and even how efficiently they are carried from one region to another. On a personal consumer level, the world is also dramatically changing in terms of a desire for increased comfort and convenience in public and private transport preferences, and the global awareness of alarming levels of air pollution.

Hitachi, a leading Japanese congl- omerate with a widespread global footprint has been a pioneer in new- age technologies, and is a frontrunner in leading technological shifts. Its diverse realms of operation have led it to offer a wide range of products and services, from information and telecommunication systems, digital solutions & services, infrastructure systems, industrial systems like water, oil & gas supply & management, to transportation and urban development systems.

The government has actively championed the move towards greater digitalisation, has realised its unparalleled contribution to addressing India’s unique challenges. The ambitious digitalisation initiative is geared towards radical and rapid transformation. The belief is that only technology can expedite the development process, cut out sluggishness and reduce the detrimental impacts of inefficient service delivery. The focus on creating channels like an upgraded public transportation system is part of a cohesive master plan to set the wheels of change in motion. The latter is one more way to infuse more equitable access to better living.

Aligned to the government’s vision of inclusiveness and true social transformation, there have been multiple initiatives launched to take the digital dream to a billion citizens – ‘Digital India’, ‘Make in India’, ‘Skill India’, to name a few. Hitachi has brought in its rich global industrial heritage and leveraged its strength in Information Technology (IT) and Operational Technology (OT) to actively collaborate on these initiatives and towards timely and successful implementation.

Hitachi’s Social Innovation Business delivers a multi-disciplinary approach to crucial business and social problems from a holistic perspective. With a century of experience in the manufacturing, power and transportation sectors, and with over five decades of IT leadership, Hitachi is able to offer an unparalleled ‘single eye view of macro solutions’.

A diversified group with established strengths in infrastructure, railways, energy, construction machinery, healthcare, IT, and automotive systems, its perspective is markedly well rounded. Understandably, its significant contributions span solutions for issues as diverse as urbanisation, water management, more robust security solutions, smarter manufacturing, financial solutions and transportation. Hitachi has been engaged in upgrading transportation systems for around 100 years. Its subsequent and early foray into IT applications, analytics, content, cloud, and infrastructure solutions have helped it transform the way cities have addressed the demands of urban living, over the years. Now, it is playing a prominent role in shaping the way citizens will travel in the future.

About 30 per cent of India’s one billion population lives in cities. That’s the entire population of the US put together. The India numbers are expected to grow to almost 600 million by 2031 (Source: firstpost.com). A host of new metro cities are being built up foreseeing the inevitable shift to more concentration of economic growth in urban areas. Already, the number of metro cities with a population of one million and above has risen dramatically.

As per the urban renewal mission 100 smart cities (Source: thehindu.com) and 500 cities in India will be rejuvenated and transformed with an allocation of close to Rs 1 lakh crore, over the next five years. The Union Cabinet has given a thumbs up to Prime Minister Narendra Modi’s proposed projects, and there is a considerable push to translate the vision into action within the stipulated time frame.

The urgency and scale essential to upgrade urban infrastructure manifold is a challenge which Hitachi is amply equipped to take on. Transport reforms are being rolled out in full earnest, under state and national level initiatives.

As population grows, and smaller cities gain momentum as centers of commerce and development, issues like congestion and safety will surface time and again. Technology and smarter planning will go a long way in moving people and goods from one point to another and will elevate living standards in future metropolises. The future promises us a peek into an unseen landscape-shorter travel times owing to high speed rail systems. Trains with automated driving, vehicles that are able to communicate with one another to avoid accidents, the success of the Smart Cities initiative will certainly involve developing and managing an efficient urban mobility and public transport system that provides city commuters a host of economical and more eco friendly options.

City borders are fast expanding into the suburbs. Inter city travel is becoming a key index of living standards, and an essential driver of real estate, infrastructural and commercial growth. Governments have devised multiple plans to introduce new-age railway systems to cater to expected demands.

Hitachi, which upholds the ethos of creating large scale social impact globally, is partnering the government’s mission to enhance the commuter experience on much maligned Indian roads. Besides, it is parallely laying tracks to enable safer, speedier rail commutes across Mass Rail Transit and Monorails. As a point of notable interest, Hitachi’s relationship with Indian Railways isn’t new. It dates back to 1950s, when it delivered the first steam locomotive to India, shortly after independence. It was also one of the first companies to deliver electric locomotives. Its contributions to developing new standards in the Indian railways, on crucial occasions, has translated to a trusted and enduring association.

Indian railways is today the world’s fourth largest network. Growth in this sector has a positive ripple effect on allied industries. Shuttling millions of passengers across the length of the country, it provides significant employment opportunities year on year, and generates development of business and accessibility for the lakhs of stations it touches. There’s a lot more riding on a transport system than its immediate benefits to the passengers.

Given rising expectations, a robust transportation network has to guarantee efficiency, safety and uninterrupted performance. As pollution concerns loom large, sustainability is also of prime importance. Hitachi’s multi-faceted technological edge is uniquely geared to building up large scale infrastructure. Furthermore, its commitment to social transformation, has led its specialised business Hitachi to take an active role in co-developing a range of railway initiatives, keeping the softer issues of better citizen experience, all round comfort and larger environmental compulsions in mind.

Speed can’t be delivered at the cost of safety, and both aspects need to be equally emphasised in any modern public transportation system. Hitachi is implementing the ‘Dedicated Freight Corridor’ (DFC) with Automatic block signaling and the European Train Control System (ETCS), between Rewari and Vadodara to Jawaharlal Nehru Port Trust (JNPT), the contract was awarded in 2015-16. Hitachi has introduced state-of- the-art technology in signaling and telecommunications on the DFC from Delhi to Mumbai.

Electronic Interlocking that is serially interfaced with Multi-Section Digital Axle Counter (MSDAC) is updating signaling systems technologies as we know them. One centralised control center for Train Management System (TMS) at Ahmedabad will seamlessly gear to ensure peak capacity and streamline time-tables for stations in that corridor. The European Train Control System (ETCS) will for the first time in India help freight trains run at the speed of 100kms/hr to halt automatically if train drivers fail to detect a signal at danger (SPAD).

Hitachi’s involvement is end to end. From rolling stock to signaling and train control systems, on-board components, traffic management, passenger information services and maintenance, it is setting up and helping manage the complex system, and building in flexibility into the system.

Hitachi has undertaken the complete digital upgrade of the railway’s multiple systems, as it reviews and reinvents functions across the board. Information and Communication Technologies (ICT) is all set to consolidate all its data gathered from multiple sources on a single platform, which will usher in enhanced efficiency. The ambitious project is yet another example of Hitachi’s significant contribution in recent times.

Interestingly, while it is an established global player, Hitachi has been an active collaborator in ‘Make in India’ initiative. In a conscious bid to employ local engineering talent and to boost indigenous manufacturing capabilities, the company has sourced and utilised localised manufacturers, while ensuring the highest standards in the execution. Mangal Dev, Head of Hitachi Railway Systems, India & South Asia Region, points out, “Hitachi has close to 250 railway engineers working on different projects. The company is doing a lot of localisation in terms of signaling equipment. The Interlocking System and MSDAC is now manufactured in India also.”

Hitachi has worked on developing such future-ready railways in multiple countries across continents, garnering rich multi-level, multi-cultural experience in tackling a gamut of practical and local issues in the execution. The country’s first high speed railway project in India, is slated to connect the 508 kilometer stretch from Mumbai to Ahmedabad.

The bullet train will be heralding a new era in speed, with an operational speed of 320 km/hr and will also aim to imbibe the Shinkansen culture of apologising to each and every passenger for even a slight delay. The project will be a decisive move forward in putting India at par with other modern cities in the world.

As cities become home to more people, and the times demand easier mobility, smart transport for smart cities will increasingly not be a matter of luxury, but a dire necessity. One is reminded of the dictum, ‘necessity is the mother of invention’. Creating brand new benchmarks in transportation systems for India, technical and Social Innovation are definitely high on Hitachi’s agenda.