On 27 May is a match every football fan in India is awaiting: Man U vs Barcelona in the Champions League final. Indians know who they will support. But do they know why? 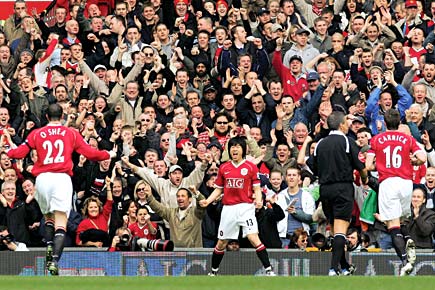 It’s Man U vs Barcelona in the Champions League final on On 27 May. Indians know who they will support. But do they know why?


It’s Man U vs Barcelona in the Champions League final on On 27 May. Indians know who they will support. But do they know why?

FOR SUPPORTERS of teams, often known as ABUs (Anyone But United), it tends to be the staple joke. “How do you spot the Manchester United fan? Just look for the guy who isn’t from Manchester. He’ll probably have an Essex or West Country accent.” Of course, we know it’s an exaggeration. What can’t be denied is the far corners of the world from where football fans pay tele-homage to Old Trafford, home stadium of this English Premier League club. Over the past few years, I’ve spotted the Red Devils’ shirt in places as far apart as Demerara in Guyana, Nimbin in New South Wales, Port Elizabeth in South Africa and the Wayanad Hills in Kerala. These are good times to be a fan too, with Sir Alex Ferguson’s side drawing level alongside Liverpool on 18 league titles, and a fourth Champions League crown up for grabs on 27 May against Pep Guardiola’s Barcelona.

What accounts for United’s following in India, though? Arsenal, Chelsea and my club, Liverpool, have their fans. As does Barcelona. But it’s probably fair to say that United’s fans outnumber those of every other team put together. I’ve often asked myself why, and the answer always came down to two themes that Indians tend to be obsessed with: tragedy and celebrity.

Tragedy first. My great-uncle, a chest physician in Kerala, has been in love with the game for almost 60 years. PK Banerjee, Chuni Goswami, Peter Thangaraj and Inder Singh… he has watched them all. In those days, and even in the late 1980s when I came back from England, there was next to no coverage of European football. Before Rupert Murdoch and ESPN-Star Sports opened our eyes to the wealth of sporting talent out there, links with global sports were restricted to newspapers. The English premiership usually merited one news item at the end of the season, as did the FA Cup and the European Cup.

When my uncle was a young boy, even that was unthinkable. But one event exposed even the football backwater that is India to Manchester United. It was 6 February 1958. Seven of the Busby Babes, a talented bunch of team players, were to die in the snowy wastes of Munich airport that day, and an eighth, Duncan Edwards, the greatest of them all, lost his battle a fortnight later. It was an air disaster that sent shock waves around the world. The tragedy moved everyone. This wasn’t just a young, vibrant team, it should have been the team. Those were the days when the Real Madrid of Alfredo di Stéfano, Ferenc Puskas and Paco Gento ruled Europe, but almost everyone was convinced that United would have been the next great side. Instead, it would take Busby another decade to rebuild the team and win the European Cup. Even at Liverpool, there’s nothing but respect for the Babes and what they achieved before fate snatched them away. In Istanbul four years ago, I asked one of the old-stagers who was the best opposition player he had watched. “Georgie Best had so much flair,” he said, “but there’ll never be another like Duncan Edwards. The lad could do it all. Like Steven Gerrard, only better.”

I confess that I find it hard to think of the Babes without a lump in the throat. Two years ago, when I was in Nottingham, I made the trek to Dudley, Edwards’ hometown. The area around his statue is seedy, but when you gaze up at the figure, it’s difficult not to get teary at what might have been. For my uncle’s generation, whose first exposure to European football came through the news of the Munich tragedy, following United was an article of faith, as simple as cheering for the dishum-dishum hero in a Hindi movie. And when celebrity followed tragedy, the bond was cemented forever.

Less than five years after Edwards, Tommy Taylor and the others were laid to rest, United managed to sign a skinny Belfast boy with magic in his feet. George Best would change football forever, perhaps even more than Pele did. At the peak of his popularity in the 1960s, he was the fifth Beatle, the wizard of the dribble who inspired a 5-1 Lisbon victory over Eusebio’s Benfica (1965-66). Two seasons later, he would score a wonderful solo goal against Benfica at Wembley.

It’s hard to imagine what kind of cult figure Best would have been had he played in this media-frenzy age. Even in more prosaic times, his dazzling dribbles, body swerves and flamboyant lifestyle made him a larger-than-life hero, football’s answer to Muhammad Ali and Errol Flynn. Three decades later, United unearthed another icon, even though he wasn’t even half the player that Best had been. But David Beckham emerged at a time when football had become as much a tabloid soap opera as a sport, and his dalliance with a pop star was as close as the new generation got to Best’s romps with Miss World contestants.

When people ask me why Liverpool are not as popular despite dominating English football for much of the 1970s and 1980s, I have two answers: lack of TV coverage and an absence of sex symbols. No teenage girl was ever going to go into a tizzy over Ian Rush’s gangly figure and slim moustache, or Kenny Dalglish’s impenetrable Glaswegian accent and expansive backside. If the number of female fans has increased in recent times, it might well have to do with a certain Fernando Torres, who has given the club priceless goals and also a glamour that it never had.

Beckham may be long gone after his tiffs with Ferguson, but United still have Cristiano Ronaldo, even if not for very much longer. His over-gelled hair and washboard abs appeal to a certain constituency, and Barcelona might have had as many female fans if Lionel Messi looked more like a model than a street urchin.

That’s not to say that United can’t play beautiful football. When Ronaldo, Wayne Rooney, Carlos Tevez, Michael Carrick and Ryan Giggs are on top of their game, their passing and movement is certainly the equal of Barcelona. What they also possess that the Catalans don’t is a miserly defence, with Nemanja Vidic and Rio Ferdinand perhaps the best centre-back pairing on the continent.

But whatever happens on 27 May in the eternal city, United’s lustre will not dim for fans in India. For some, it’s a bond that goes back to Munich. For others, it might be a fleeting obsession with Ronaldo’s latest look. Many won’t have heard of the Babes or of Bryan Robson, the 80s Captain Marvel, but that won’t stop them heading for Rome. Me? I hope they get thrashed, though like many Liverpool fans ashamed to admit it, my respect for Ferguson and what he managed to do will remain untarnished.