The Goal of the Century…

But for the Argentines, Maradona’s second goal against England in the 1986 World Cup was far more than just a goal. It was the revenge of a nation. 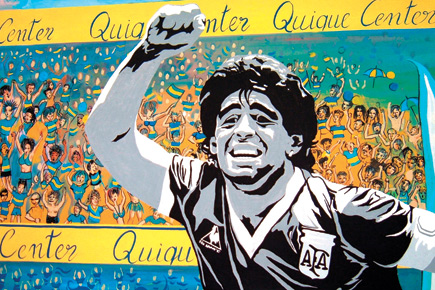 But for the Argentines, Maradona’s second goal against England in the 1986 World Cup was far more than just a goal. It was the revenge of a nation.


Just four minutes after the infamous ‘Hand of God’ goal in the 1986 World Cup quarter-final match between Argentina and England, when Diego Maradona punched the ball into the English goal, he dribbled past five English players to put the ball in the net again. England were knocked out of the tournament. In a poll conducted by Fifa in 2002, this goal was voted the Goal of the Century by football fans around the world. It is widely considered Maradona’s magnum opus.

But Maradona’s feat was much more than just a goal for the Argentine public. They saw it as revenge for losing the Falklands War in 1982 to Britain. Indeed, the footballing rivalry between the two countries had been equally bitter for 40 years. In a quarter-final of the 1966 World Cup, a game that Argentines refer to as “the theft of the century”, England won 1-0 thanks to a goal by Geoff Hurst which the Argentines thought was an offside. However, things turned really ugly when Argentina captain Antonio Rattín was “unfairly” sent off, and Rattín had to be escorted off the pitch by cops.

In Argentina, there were reports that the German referee said he had sent Rattín off because he disliked the way he had looked at him. British newspapers, meanwhile, cited the referee ascribing the send-off to the player’s ‘violence of the tongue’; but since the German knew no Spanish, this seemed outrageous to Argentines. What did Rattín do? He’d wanted to speak with the German referee on rulings that seemed overly favourable to the English. Rattín made a visible signal, indicating his captain’s armband and need for a translator.

After the match, England manager Alf Ramsey refused to allow his players to swap shirts with the Argentines—as is traditional after the conclusion of a football match—and later described the South Americans as “animals” in the press.

Maradona wrote in his autobiography: ‘I sometimes think I preferred the one with my hand… It was a bit like stealing the wallet of the English.’ He also wrote that ‘it was as if we had beaten a country, not just a football team… Although we had said before the game that football had nothing to do with the Malvinas war, we knew they had killed a lot of Argentine boys there… And this was revenge.’