The reason why some Indians play baseball. 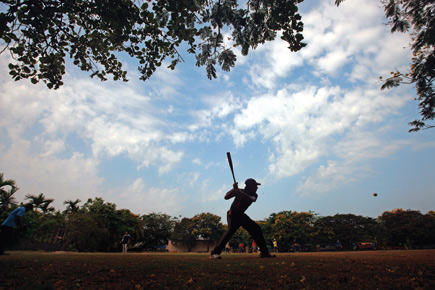 The reason why some Indians play baseball.


Picking out Ricky Sharma is easy. In a playground he sticks out like a flamingo for the sport he plays. The 20-year-old plays for his college team and the Maharashtra state team. His college, Lords International in Borivali, a distant suburb of Mumbai, gives him a 50 per cent fee rebate every year that he plays. Two years ago, he was chosen to play for a junior tournament in Jakarta. In an established sport, Sharma admits he would be in a second-string team. But this isn’t an established sport. Not here. This is baseball.

When Sharma took up baseball, he greatly disappointed his architect father. But the boy knew what he was doing. He would face far less competition in baseball than in mainstream sports. “There are more chances for me in baseball. Baseball mein kucch toh hoga aisa lagta hai,” he says.

A sportsman since school, Sharma tried his hand at athletics, cricket and gymnastics but found little scope. When he went to college three years ago, the coach was an active baseball player. That is how it started for him. Currently, Sharma also represents the Mumbai suburban team. There exists one, indeed, with uniforms and everything; it plays inter-district tournaments.

Marginal sports are a short cut to fame in college hallways and to better job prospects. Twenty-year-old Sonali Kurade is a BSc infotech student from rural Raigad (Maharashtra). She is the captain of Pillai College, Navi Mumbai, and its lead pitcher. Kurade played for Maharashtra’s under-19 girls team until this year. She is finding out that in her college, baseball is quite in demand.

The medals and media coverage that the likes of Kurade get help the college too. The education business is more cut-throat today. Colleges are competing with each other for funds and recognition even on the sporting field. “Easier for colleges to win medals in niche games like baseball,” says Tribhuvan Singh, the coach of the Suburban Mumbai District team, a gleam in his eye.

No wonder the Navi Mumbai college financed Kurade’s team kits, no wonder Kurade is treated with respect by her coach even in the hierarchy-conscious world of college. In India, as in other countries, universities score colleges on many parameters. Sports is a parameter too. A college earns 40 to 100 points if its students join inter-college contests and earn medals. An active sports department is critical for the overall rating of the college.

The 22-year-old Tribhuvan Singh coaches five colleges. He says 40 suburban colleges in cricketing citadel Mumbai have baseball teams. And so he has ambitious plans to start an inter-school league along the lines of the US Little Leagues. The sporting business and the education business have started to march hand in hand.

Like anything Indian, updated statistics in niche sports are not available. The Amateur Baseball Federation of India (ABFI) claims over a lakh players nationally. Even if you take this with a pinch of tobacco, the sport is firmly on the Indian college sporting calendar. There are a minimum three baseball tourneys in India every year. Sixteen colleges played in the important Mumbai University championship, up from 12 in the previous edition. There are even inter-university championships annually, across the country. Twenty-two Indian states play baseball with each other. In 2011, for the first time ever, they will play baseball in the National Games (if the Games are held, of course.)

In 2004, US pro coaches came to Goa under a US embassy sponsorship. In 2008, Japanese coaches came. Hundred Indian amateurs attended a camp with them.

None of the 20-odd baseball players interviewed for the story had star-spangled dreams, however. They do not care who Sammy Sosa is, or how far Mark McGuire hit. Few watch India’s only baseball telecast on ESPN. They have no illusions about media attention because they see baseball only as a job prospect. But sports administrators and coaches like Singh cherish dollar dreams in baseball. Some went on record with their admiration for Lalit Modi. (They were interviewed before his fall).

Dileep Naik, Goa state team coach, and former Indian women’s team coach, wishes to get foreign investment in Indian baseball, although that sounds far fetched and is perhaps no more than wishful thinking. In 2009, on a personal visit to Orlando, Florida, he visited a local baseball ground and talked with the local Braves team. “It was unthinkable not to go. When you visit Pandharpur, you must go see the Vithal temple,” he says. “They have a three-tier system. Only a player who rises through two junior levels can play for the main team. That’s not easy. The junior Braves beat a national-level team from Canada,” says Naik, brows raised. Naik was among those who lobbied hard to put baseball in the National Games. He wants more. The coach wants to make Goa the baseball capital of India.

India’s baseball federation has sent teams to international tournaments. The World Cups, sometimes called championships, of Taipei 2002, Bangkok 2003, and Japan 2009 saw a national women’s squad join in. Don’t ask how they fared. Many players contributed airfare themselves. They were reimbursed by their states later.

According to PC Bharadwaj, Secretary General of ABFI, the sport was being played in and around Lucknow University by American emigres in 1983. In that year, a group of Indians in that circle launched the ABFI. Baseball took 26 years to get to what it is today.

Despite its slow progress in India, some folk seem to bet on it. An American sports representation firm and an Indian media house launched a talent hunt to identify baseball potential in India a few years ago. It is now annual. Two youths with whippy pitching arms, Rinku and Dinesh, were contracted and sent to America. The idea was, cricketing skills can be honed for baseball.

I decide to try baseball. The Mumbai Suburban team practises in a municipal playground. I visit them on a public holiday, when every kid, his pet dog and the fleas on the dog would be playing cricket. It’s a sharp bright subtropical suburban Mumbai morning.

“Want to play?” asks Coach Singh. Sure. Bring on the cheerleaders, and a hot dog with mustard.

The hitter must stand at a marked spot called a ‘plate’, the catcher behind him.

Baseball is a culture shock to me. My first shot is a square cut. What? Illegal! The hitter can only hit inside the ‘V’.

A million gasps are heard between Chinnaswamy Stadium and Ferozeshah Kotla. The ghosts of Duleep and Ranjit are conjured, frowning in their whiskers. Ye gads.

There are no stumps and you must miss the ball thrice to strike out. If you connect with the ball, you have to run. When you touch all four bases, which are at the four corners of a diamond shape, you score one run. You can be run out at any of these four bases. And yes, you can achieve the ultimate American idiom, the baseball version of a six, the home run. Or you can be caught out while trying. Me, I did not get caught out.

I got struck out. Three strikes and you’re out. The coach gives you a break, throws a slower ball. The ball looks eerily familiar, a white ball with a red tennis ball-like wavy seam, hanging there in the air. Sweet.

Don’t slug. People are around.

And this shaft is aluminium.