An incredible heart delivery in Chennai

The speed of the ambulance is said to have touched 100 kmph, making the 12 km journey in less than 14 minutes 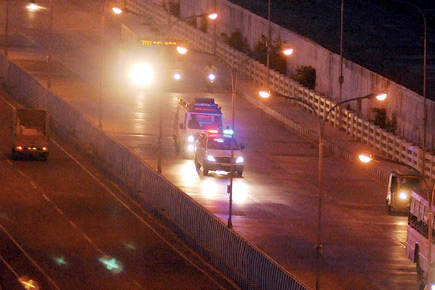 The speed of the ambulance is said to have touched 100 kmph, making the 12 km journey in less than 14 minutes

On the evening of 16 June, a ‘green corridor’ or a route made free of red-light stops was created in Chennai, so that the heart of a do•nor could be transported from one hospital to a recipient in another hospital. The heart was transported in an ambulance behind a patrol vehicle, from Rajiv Gandhi Government General Hospital to Fortis Malar Hospitals in Adyar, across 16 traffic signals, a distance of 12 kilo•metres which normally takes a minimum of 45 minutes. The ambulance was able to deliver the heart in a little less than 14 minutes.

The donor, a 27-year-old male named Loganathan from Kancheepuram, had been left brain-dead after a road accident on 11 June. The recip•ient was a 21-year old college student from Mumbai named Hvovi Minocherchomji, suffer•ing from dilated cardio•myopathy or a swollen heart.

Although a human heart can be preserved for up to four hours, the chances of a successful transplant increas•es the sooner the procedure is completed.According to media reports, the decision was taken early in the morning. The help of the police was then sought to facilitate a quick transfer. Police personnel were stationed at various intersections, with the pilot vehicle constantly radioing their location to the control room and the police teams on the route. The speed of the ambulance on occasions is said to have touched 100 kmph. The journey, how•ever, took about four minutes longer than the planned nine because of the many speed breakers en route.

The transplant operation, which was carried out almost immediately after the delivery of the heart, was conducted successfully. Loganathan’s family donated not just the heart, but also his two kidneys, eyes, liver and skin to different hospitals.