×
Person of the week 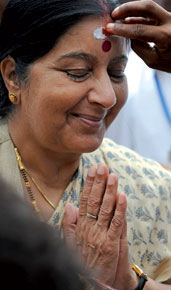 There is little evidence to believe in the virtues extolled of spiritual books. Reading them will neither cure depression nor bring about world peace. Setting aside whatever literary and historical value they have, an objective scrutiny of a scripture will often reveal, irrespective of religious denomination, content that does little more than reaffirm what people already know or want to believe. Those who promote them are usually those who are also invested in it in some way. The matter gets more complicated in India with the wide prevalence of spiritual books of different faiths. And as it often happens, in the spiel about the philosophies enshrined in these books, the power of individual conscience and values to guide a decent life is undervalued.

So why has Sushma Swaraj, the External Affairs Minister of India, a secular state with several religious communities with their own sets of spiritual books, begun asking for the Bhagwad Gita to be made the country’s ‘rashtriya granth’ or national scripture, unless the aim is to have the worthiness of this book trump other spiritual books? She is, after all, no railway station evangelist, but rather an important representative of the administration. In a season of outrageously silly pronouncements— from hailing the Taj Mahal as a Hindu temple and asking anyone not of ‘Ram’s lineage’ to leave the country, to calling transplant surgeries and nuclear tests an ancient Indian practice—a high- ranking minister whose job is to set foreign policy is recommending the book to psychiatrists, claiming that reading it can cure depression. Swaraj made this announcement at the Red Fort Maidan in New Delhi where a function to celebrate the apparent 5,151st anniversary of the Gita was held. Almost immediately, she found support from those in the RSS and VHP.

According to Swaraj, since Narendra Modi had gifted copies of the Bhagwad Gita to several world leaders, it has already gained the status of a ‘national scripture’. Just a formal declaration is awaited. But as many have pointed out on various social media platforms, India already has a national scripture, namely the Indian Constitution. The Constitution is not representative of any particular community or thought, but encapsulates the vision of a pan-Indian state. Furthermore, the Gita, like other religious scriptures, hardly requires any branding or recognition by the Government.

What is interesting, however, is the question of why the Foreign Minister would enter a territory that is not formally hers to bother with. Swaraj was once considered a forerunner for the post of Prime Minister and she has always tried to maintain the image of an effective leader. Except for an episode back in 2004, when she threatened to tonsure her head if Sonia Gandhi became the PM, Swaraj has tried to come across as someone who is sharp and articulate, uninterested in needless banter. But of late, despite the high-profile nature of her ministerial berth, Swaraj has been reduced to a faint shadow amidst an out-of-focus background. Rather than her, it has been the Prime Minister who has been jetting to various world summits, meeting with top international leaders and setting foreign policy agendas. Could Swaraj be trying to impress the RSS and her immediate contemporaries and bosses? Could she be trying to steal a march on Human Resources Development Minister Smriti Irani who has been preoccupied with pushing Sanskrit into schools?

The answers to these questions lie with Swaraj, but what her pronouncements have done is increase unnecessary controversy and lend credence to the fear that the extreme fringe of the Indian Right is not as peripheral as one might imagine.