Is a structurally unmodified Scorpene worth the risk? 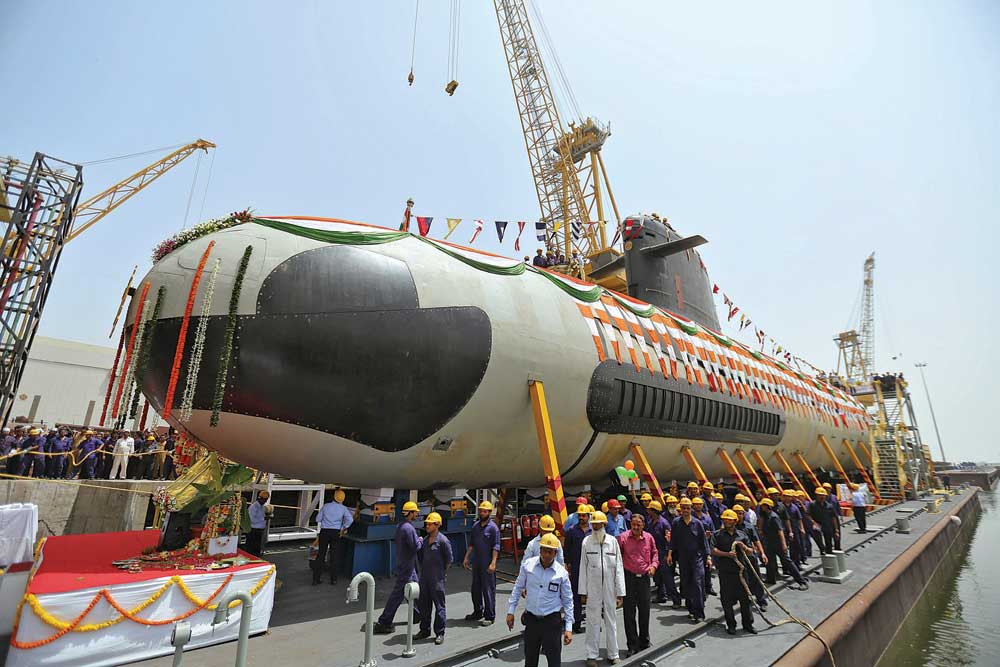 THE INDIAN MILITARY is an open book. It has no hardware secrets worth the name because every major weapons platform and armament in its inventory— from combat aircraft, tanks, artillery to warships and submarines—is procured from abroad and is thus compromised at the point of induction itself. There are only five arms suppliers of note—Russia, the United States, France, the United Kingdom, and Sweden, the last four constituting the North Atlantic Treaty Organization (NATO), whose members share highly sensitive information on the military technology supplied to Third World states among themselves, and, if it serves their individual national interests, with states that are in adversarial relationships with their customer(s). In the information age, moreover, there are enough purveyors of specialised information, such as the Jane’s series of British publications, that provide fairly detailed and authoritative information on every weapon system anywhere, from which actual performance parameters can be extrapolated.

Such secrets as still attend on imported arms and equipment are generated by the Indian armed forces post-acceptance trials and after a period of use, and pertain to the tactical and combat engagement data concerned with exactly how the technology performs within the specificities unique to the Indian terrain, weather and ambient conditions in general. Given the mediums in which they operate, land-based armaments and fighter aircraft are, in this respect, more transparent than submarines working in extremely dense and complex environments.

So, how exactly do the disclosures in The Australian newspaper of the ‘Restricted Scorpene India’ documents impact India’s crucial sea denial capability, except as an instance of everybody knowing whatever there’s to know about yet another weapons platform in the Indian inventory—this time the supposedly stealthy diesel-electric hunter-killer submarine?

The original un-redacted documents spirited away on a disc in 2011 by a French officer working with the French defence industrial group Direction des Constructions Navales (DCNS), has been bouncing around Southeast Asia before landing up with the Aussie daily. DCNS, in Indian parlance, is a French Defence Public Sector Unit. The upside of the leak is that India, instead of being blissfully unaware, now at least knows that classified material regarding the Scorpene was available for the asking by whosoever could come up with the requisite horde of cash (presumably) during the last five years. Because this is high value stuff pertaining to national security, it is reasonable to believe interested parties— Chinese military intelligence agencies in the main—accessed it long ago, and various performance specifications of the Scorpene, especially its stealth features, were factored into designing the counter-measures for the People’s Liberation Army Navy (PLAN) diesel-electric submarine, improvements which will be seen in the (Project 041) Yuan-class boats coming off the production line in Shanghai’s Jiangnan shipyard. Besides, what was known to China yesterday is passed on to Pakistan today (if the data is not already in Pakistani hands).

It is important to observe that it was not the French government or DCNS that alerted the Indian Government and Navy to the fact of the documents going missing or being purloined in the first place. It is simply not possible that DCNS and the French government were unaware all this time of the thievery or successful hacking of DCNS’ data banks. Nor can DCNS claim with any certitude that only 22,400 documents were stolen five years ago and not the whole caboodle. After all, if this was a cyber heist of data, why would the cyber crooks be satisfied with taking just 6,841 pages relating to communications systems, 4,557 pages to underwater sensors, 4,301 to combat management systems, 4,209 to above water sensors, 2,138 to navigation systems, and 493 pages to the torpedo launch system, and not every last document? It doesn’t meet the test of common sense. So, it may be correct to surmise DCNS lost the entire tranche of papers, every last bit relating to Scorpene India.

That this reading is correct may be gleaned by two things: Washington’s warning to its French counterpart that it will not tolerate laxity in safeguarding NATO secrets; and DCNS’s keeping the fact of the theft from the Indian Government once it was discovered, which must have happened soon after its occurrence. This last deduction is because otherwise one would have to presume a laughable quality of encryption, and cyber and physical security for state secrets in France, which is simply not true. But disclosing this to New Delhi at the time, Paris may have believed, would’ve risked upending the military supply relationship with India. Saying nothing about it and hoping the heisted Scorpene material would be quietly ingested by some countries without the leak ever becoming public was, from a French perspective, the prudent thing to do. But how are NATO secrets compromised? Because, the Indian Navy’s specifications for the submarine Project 75 won by Scorpene hew to NATO standards; and revealing one set reveals the other. It is the reason why Australia too is concerned. DCNS had won a bid to build an Australian submarine fleet worth $50 billion of the Shortfin Barracuda, whose plan form is derived from the Scorpene; that also stands compromised.

In this context, what’s most troubling is the attitude of the officialdom. Defence Minister Manohar Parrikar, the Ministry of Defence (MOD) and the Indian Navy, instead of voicing consternation and worry, are all busy pooh-poohing the ill-effects of the leak. Without waiting for the formal investigation to finish, Parrikar has concluded that the loss of the Scorpene documents is “not a big worry”, thereby dictating the line to the high-level committee investigating the leak in Delhi. On his part, the head of the DPSU Mazgaon Dockyard Ltd, Rear Admiral Rahul Shrawat, drew a red herring, speculating that this leakage could be of “dummy data”. Then there were statements absolving DCNS and the French government of responsibility and making excuses for the French supplier with puerile differentiations between the material being ‘hacked’, ‘leaked’ and, Parrikar’s own spin, ‘not intentionally leaked’.

INSTITUTIONALLY, SUCH STATEMENTS seem designed to cover up for the usual poor drafting by MOD babus of the contract with DCNS. As has been pointed out in a news story, the ‘Non-disclosure’ clause in the 2005 Scorpene contract adhered to Article 25 of the procurement policy at the time which said the supplier will not disclose to any third party ‘any specification, plan, design, pattern’ of information on the pain of forfeiting the Rs 1,800 crore put aside by DCNS as penalty, without the contract mentioning anything about the French company’s responsibility for protecting the classified data. So India can’t punish the supplier, won’t be able to encash even this paltry sum for the criminal negligence at the DCNS-end, and, of course, no MOD official will be held accountable for the contract language that will permit the foreign supplier to, once again, go scot-free.

Parrikar has indicated he will await the report by the Directorate General of Armament (DGA) in Paris. But the Government’s ‘What, me worry?’ stance must have come as a great relief to Paris and shown it the way out of a culpable mess it finds itself in. There is now every incentive for DGA and DCNS to stonewall and divert attention, rather than honestly investigate the leak, come clean, and list the weak procedures and protocols involved in safeguarding highly classified data that enabled the breach, assuming Scorpene India documents were so classified, which may not have been the case, to conclude that this was just a one- off, unpreventable event, a happenstance. So sorry about this, will tighten up at our end, but let’s carry on regardless, shall we?

Except Parrikar has said MOD is proceeding on “worst case” basis. If his ministry is assuming the worst, meaning the Scorpene is now completely useless as a fighting platform, how does it gel with the Defence Minister’s own conciliatory pronouncements and the Navy’s tilt towards believing that the first unit, INS Kalvari, undergoing sea trials, will show that the operating frequencies and particularly the radiated noise are below the ‘safe range’ and hence that the sub is good enough for operations? There may, however, be an extraneous factor influencing Parrikar’s thinking. He seems worried that the unjustified deal for 36 French Rafale combat aircraft that Prime Minister Narendra Modi desires, and will end up costing India in excess of $40 billion, is now imperilled.

What Parrikar ought to ponder is whether at $1 billion per Scorpene, which is the cost of leasing the immensely more effective and deadly nuclear powered Akula-II attack submarine from Russia, a structurally unmodified Scorpene, without Air Independent Propulsion for long submerged missions, is worth the risk? And, shouldn’t France be asked to foot the bill for any such modification to turn the five remaining Scorpenes being built at MDL into serviceable weapons platforms on the pain of termination of the military supply relationship? In any case, DCNS with its Barracuda ought not to be allowed within sniffing distance of the Navy’s follow-on Project 75i.