If Jug, like his Riverdale namesake, seems too laidback to be paying attention to weightier matters, you’ve been had 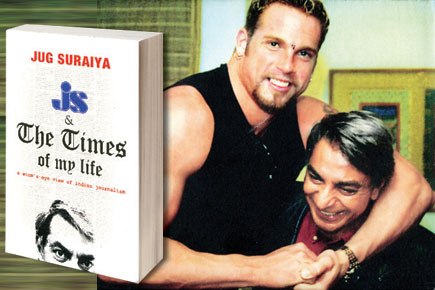 If Jug, like his Riverdale namesake, seems too laidback to be paying attention to weightier matters, you’ve been had


Nikamma. In the old days, it was shameful to be called one. Nowadays, it’s a cue to jump with joy and fist-pump some air with a ‘yesss’ of triumph. For this dramatic shift, credit Jug Suraiya. Ever since he declared journalism—okay, generalism, if people insist—the ‘first resort of the nikamma’, good-for-nothingness has acquired an aura of sorts. Any day now, any day now, it shall be reclaimed. Schwack! Done at the stroke of a pen. No carnival walk, no Rio pageant replay, and, believe it or not, no televised talkathon either.

Sneak revolutions are rare, and sneak revolutionaries rarer still: reason enough to pick up JS & The Times of my life, Jug’s amusing story of his career as a generalist with Junior Statesman and The Times. His first attempt at proving himself to be of some value, though, involved a stab at business in Calcutta. It flopped, but not without accidentally endorsing the Theory of Historical Materialism: his outlook, it would seem, was shaped instantly and impishly by his material trappings; in this case, a paint-spray machine that covered household walls with as much industrial efficiency as, as he was soon to discover, shrieky lady customers.

Since then, Jug’s life has been a rib-tickling rant against The Solemn, and he’s had his readers laughing out loud with frightful frequency. Such a life must not have been easy working at a newspaper that, among other things, solemnly vows every morning to ‘Let truth prevail’ in its finest of fineprint. As you’d expect, Jug’s role in leaving a record of ‘the times’ for all eternity had to be thrust upon him, like a benign but ill-fitting robe. And he’s still uneasy about it, by the sound of his grumbles.

‘I’m always suspicious of this history-in-the-making business,’ he writes, ‘History remembers the pharaohs for the great pyramids they built. Except they didn’t build them. The poor sods who built them were nameless slaves who got crushed under the falling masonry, leaving not even a squashed smudge on the papyrus of history. If history wants to be made, let it get on with the damn job. With me keeping safely out of the way.’

Jug’s book is funny, funnier as it goes along, and perhaps funniest when he takes a jugular stab at the business he’s so suspicious of, not just proving that all humour is slapstick in a way, but also stumbling upon the Theory of Historical Banana-peelism: ‘The path to secular liberalism or liberal secularism,’ Jug warns, ‘is paved with banana skins.’ Don’t look closely enough, turn your nose a bit too high, and—schluck!—there you go.
Jug ventures gallantly forth all the same. Without batting an eyelid, he shrugs off Richard Dawkins’ dismissal of idle intuitions and divine delusions as just another type of ‘fanaticism’. He assesses religions by risk-of-blasphemy, as if he’s picking a portfolio of dubious bonds. And, if you’re still not cracking up, makes a poker-faced case for a uniform civil code in India. My pillow-pack waist wobbles at the very thought of it. Standardised weddings, for a start. Standard vows, standard bows, standard rows, all under blissful sarkari enforcement. Maybe a push-button assent bleeper—like an EVM—in place of the usual saat pheras, I-do-I-do, or whatever else tradition has passed along. Plus, of course, standard hows, beginning with how to consummate those vows (if not bows and rows). With conjugal relations dictated by the State, the knicker police would have a field day keeping libido deviants in check. And once the drill finally gets to kill the thrill, keeping safely out of harm’s way would demand a sense of humour more Benigni than benign… if you get the drift.