How the Indian Olympian has evolved through the decades 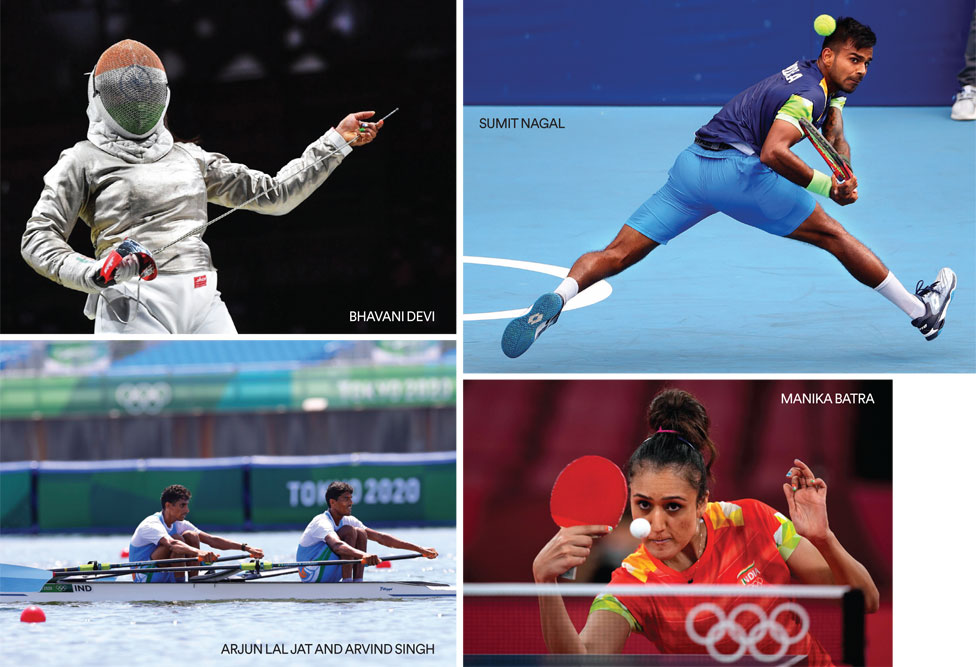 Back in 2006, a shy young girl presented herself before Anita Chanu in Imphal, asking if she could enrol at the weightlifting centre Anita ran. That was just six years after weightlifting had broken into the national consciousness when weightlifter Karnam Malleswari became the first Indian woman to win an Olympic medal (a bronze), and another female Manipuri weightlifter, the celebrated Kunjurani Devi, was a popular name in the state.

Anita, a former weightlifter herself who had once competed at the 1990 Asian Games, recalls looking at the diminutive girl standing in front of her, noticing how powerfully she was built. “I put her through some tests to see how good she was,” Anita says. “And even at that age, she was really very good.”

The young girl was Mirabai Chanu, the ebullient Manipuri weightlifter who walked up to the Olympic stage a few days ago, her hair pulled up in a bright red scrunchie and a pair of Olympic rings as earrings, and lifted a combined 202 kg, winning not just a silver but the entire country over.
Chanu’s strength was first recognised by her family, as the story goes, when they found her as a child carrying bundles of firewood from a nearby forest far heavier than her brother could. By the time she started training under Anita, she was already very strong with a great muscle mass, her former coach recalls.

When Malleswari was rising up the ranks in weightlifting, it is said, women athletes were not taken seriously, especially those in male-dominated sports like weightlifting. If Chanu had any difficulties, it was not of the sort Malleswari faced. Malleswari’s medal, and the performances of other female athletes in the weightlifting circuit, had changed things. Chanu’s difficulties stemmed from her family’s poverty. Her father worked as a construction labourer and her mother sometimes set up a tea stall.

“Mirabai was completely dedicated to weightlifting. And she knew the potential she had. But she used to worry about her family’s (financial) condition,” says Anita. “I used to tell her, ‘You are quality, medal prospect. Focus on it (weightlifting), and it will get you out of it (poverty).’”

Chanu’s win has been the only glimmer in an Indian campaign that has so far fizzled more than crackled. Archers, swimmers, paddlers, tennis players, sailors, shooters—especially the shooters—have shown up, and occasionally shown some promise, but eventually got blown away. The men’s hockey team got thrashed 7-1 against Australia (although they came back promisingly against Spain (3-0); the largest-ever contingent of shooters, expected to bring back a clutch of medals among them, is going through a meltdown; one player’s gun broke; the next day, possibly her mind.

The gulf is widening by the day. With its solitary medal, India has been pushed down to No 34 on medal tallies at the time of writing. The wound hurts a little more when it comes to the shooters. Predictions of a double-digit haul by the Indian campaign was built on the notion that the shooters, a record 15-strong contingent, would snatch about four, or maybe more, medals. Much was expected of the two teenaged prodigies—Manu Bhaker and Saurabh Chaudhary—who have so dominated their shooting events in the last couple of years that medals from them were expected to be money in the bank. But the Olympics can be a cruel beast. And from a confirmed four to six medals, it appears they will return with none.

Archers, swimmers, paddlers, tennis players, shooters have shown up, and occasionally shown some promise, but eventually got blown away. The largest-ever contingent of shooters, expected to bring back a clutch of medals, is going through a meltdown

INDIA HAS historically been a laggard at the Olympics. It probably has the worst medal per population ratio. Reasons such as a lower GDP or a genetic predisposition to sporting failure make little sense since poorer countries have fared far better, and the country is really a wide variety of races and gene pools. Early in its history, India didn’t even seem to care much for an Olympic medal. When wrestler KD Jadhav returned home after winning independent India’s first individual Olympic medal in 1952, it is said, he found a cavalcade of some 150 bullock carts from his village. For the rest of his life he was forgotten, dying in penury, and awarded with an Arjuna Award only posthumously in 2001. Unable to unearth new talent, India was digging up old ones.

Hockey supplied India with a steady stream of medals. But even that tap ran dry after 1980. The stories of Milkha Singh losing his famed Rome Olympics by a fraction of a second, PT Usha coming so close, and probably suffering from the lack of better coaching, like little puffs of cloud on a land stricken with drought that had appeared promisingly on the horizon and then passed by.

It wasn’t until the turn of the century, first with Leander Paes in 1996, Malleswari in 2000 and Rajyavardhan Singh Rathore in 2004, that they challenged the idea that Indians were too small, too frail to win something. And then 2008 happened. For the first time, there were three individual medallists in three different disciplines, one of them winning India’s first and only gold medal in an individual sport. In 2012, there were six in four different sports. It seemed to herald a new moment in Indian sport. Not necessarily world-beaters, but competitors. The badminton player-turned-coach Pullela Gopichand once told me players in the past went to the Olympics to experience the event and to collect memorabilia. Now, he said, they go to win medals.

Hockey supplied India with a steady stream of medals. But even that tap ran dry after 1980. It wasn’t until the turn of the century, first with Leander Paes in 1996, Malleswari in 2000 and Rajyavardhan Rathore in 2004, that they challenged the idea that Indians were too small, too frail to win something

It isn’t just the number of medals but the spread of the sporting landscape. From a little over 50 athletes in 12 sports in 1992 to 120 athletes in 18 sports at this edition, in a few of which they are serious contenders. This year’s contingent included India’s first-ever Olympic fencer, Bhavani Devi, clenching her fists and letting out little peals of screams every time she scored a point. She made it past her first round. There is a first-ever female Indian sailor (Netra Kumanan); the first singles tennis player (Sumit Nagal) to register a win since Paes in 1996; the first rowers (Arjun Lal Jat and Arvind Singh) to reach the semi-finals stage; and two table tennis stars (Sharath Kamal and Manika Batra) who reached the third round in their individual events. They may not have medals to show but each is a significant feat that opens up these games a little more.

The most remarkable aspect of the evolution of these sports in India is the participation of women. Since the 1952 Games where India sent its first female athletes, several contingents have had just one or two women participants, and never in the double digits. This changed at the turn of the century—incidentally the year when a woman first won a medal—with women usually making up about 40 per cent of the contingent and this transformed the sporting landscape. (This year’s contingent has 52 women in a squad of 120.) Women have won six medals so far. Had it not been for PV Sindhu and Sakshi Malik last year, India would have nothing to show for it.

Even this year, many of the prospective medallists are women. If Chanu redeemed herself after her failure at Rio—where she was unable to register a single valid lift in the clean and jerk section of her event—her Rio and Tokyo colleague, wrestler Vinesh Phogat, will be looking at a similar shot at redemption. Phogat’s Rio campaign had come undone disastrously when she suffered a horrific knee injury in the quarter-finals. Since that event, where she had to be lifted onto a stretcher, she has become an even stronger medal candidate, having moved her weight category to 53 kg, winning a World Championship bronze in 2019 and rising to World No 1.

So far, last Olympics’ biggest Indian star Sindhu has cruised through her two matches. Since her performance five years ago, she has become one of the top badminton players, picking up many badminton titles, and under her new coach, the South Korean Park Tae-sang, worked on her defence and added more strokes. Also, the Spanish player Carolina Marin, who came between Sindhu and a gold last time, isn’t competing this year. Will India’s second individual gold medal be won by a woman?

With just a single medal to show at the time of writing, India’s campaign looked suspiciously like that of Rio. But there is still some way to go. There is javelin thrower Neeraj Chopra, wrestler Bajrang Punia, the top-ranked flyweight boxer Amit Panghal, all of them widely tipped to win medals, even as Assamese boxer Lovlina Borgohain, now in her quarter-finals, is just one win away from a medal, and Mary Kom, 38, a mother of four, is working her way through boxers half her age.