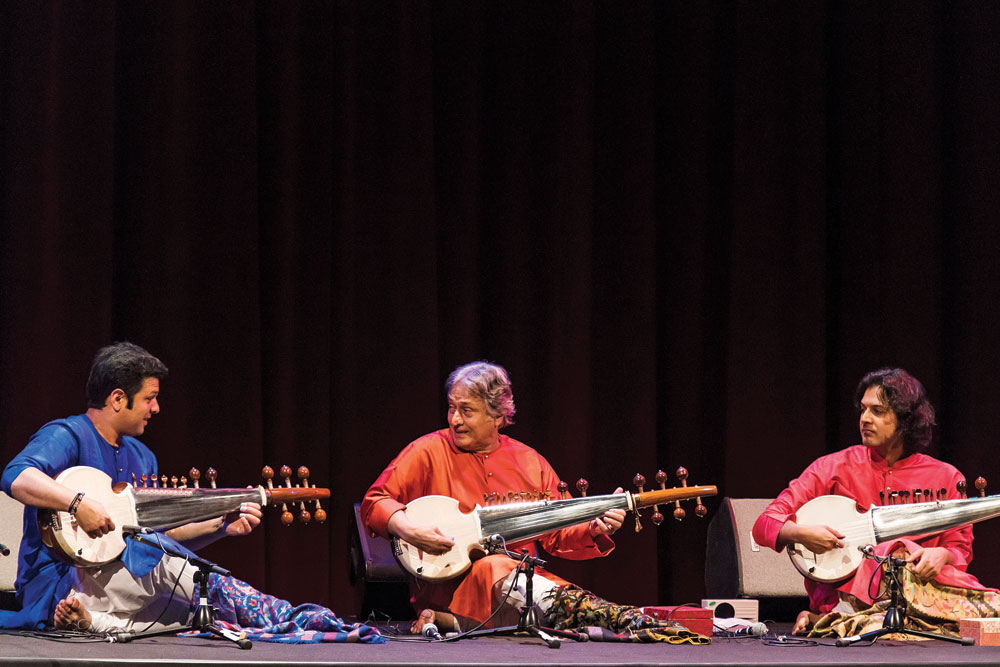 
On April 20th, 1984, the Governor of Massachusetts declared that the day would be celebrated as Amjad Ali Khan Day in the state. Khan, then on tour in Boston, wears this honour with humility but shares a memory that amuses him to date. He was asked to extend his trip by a week and perform for a private audience hosted by Michael Jackson. But Khan, who was a young father back then and unfamiliar with Jackson’s pop superstardom, declined the offer so that he could rush back home to his family.

The Indian classical music legend that is Khan has been performing in the US since 1963. His first US tour was a result of sheer happenstance—his older brother Babboo Saheb, who was originally supposed to be part of the tour, chose to remain in Gwalior with their father, Ustad Haafiz Ali Khan. So the young musician, then aged 18, set out on a two-month long tour with a troupe of musicians and dancers that included the then rising star of Kathak, Pandit Birju Maharaj. At Khan’s solo recitals, Pandit Birju Maharaj played the tabla and when the Kathak star performed, Khan, would accompany them. “My father was very worried about that trip because he was afraid of flying. He was more afraid that the youngest child was travelling. All the musicians appealed to him and he finally agreed. That was the time when America was waking up to Indian music,” says Khan, a renowned artist of the Gwalior gharana.

Half a century and several concerts later, Khan tells us that during these trips, many persuaded him to move to the US and set up a sarod academy in America, but he chose to remain rooted in India. “India has made Amjad Ali Khan. Every corner and every state has nurtured me. They gave me so much love as a musician and I performed so much that I did not even complete school. They were fortunate to have studied,” he says pointing to his sons Amaan and Ayaan Ali Bangash, who could pass off for twins. When we met him last December in the Bay Area in Santa Clara, home to Apple and some of the biggest tech startups such as Uber and Four Square, Khan was set to perform at the first ever HCL Concerts organised in California. “The meaning of artists is much bigger in this part of the world. I admire their way of life, consideration and respect for artists. In our country, the problem of roti, kapda and makaan still exists, especially for artists,” says the 74-year-old.

Khan acknowledges that he is not the guru that his father was. That was a time when gurus demanded complete surrender. “We weren’t allowed to plan for tomorrow,” he says. He is more of a friend to his sons. The younger musicians tell us that their father has never been a guru who expected them to walk the conventional path. “Every musician has a different mission. In our country, we blindly follow convention. There is a slight difference between tradition and convention,” says Khan. What he means by this is the freedom to perform a piece, for instance, without being constrained by structure. “A few years ago, a Bengali musician came up to me after one of my performances in Germany and asked me why I hadn’t played an alap (opening section to a raag). I told him that I’d played many alaps in my life and now it was his turn to play one. Alap, jor, vilambit—he was used to that conventional style of playing,” explains Khan.


The meaning of artists is much bigger in this part of the world. I admire their respect for artists, says Ustad Amjad Ali Khan, sarod player

While growing up, Amaan and Ayaan recall that it was their mother, Subhalakshmi Barooah Khan who would ensure that they practised every day. “Ma is the backbone of the family. We were fortunate that she was classically trained (in Bharatanatyam) at the Kalakshetra by Rukmini Devi Arundale. She knew the journey of this craft. Even if we were not playing constantly, she made us realise the responsibility because this is the greatest wealth that our father has bestowed on us,” says Amaan. Ayaan adds that his parents also instilled the values of secularism early on in both of them. “My parents did not practise any religion. They are not ritualistic. They are spiritual and that is what we learnt,” he says.

Khan, who would be touring constantly, wanted to spend any free time that he had with his family. “I did not ever persuade them to play the sarod, but I tried to make the music interesting for them,” says Khan of being a guru to their children. He would even play nursery rhymes to them on the sarod. “I was not used to dealing with toddlers. Uss zamaane mein sirf videsh se cassettes aate the nursery rhymes ke (In those days, nursery rhymes were recorded on cassettes and imported). I realised there was no birthday song in our own language,” remembers Khan, who then went onto record a double album, released in 2004, called Amjad’s Sarod Sings With Children, which included songs in Hindi and English. Khan played the sarod while a group of children lent their vocals to rhymes such as ‘Old Mac Donald’ and bhajans such as ‘Raghupati Raghav Raja Ram’.

One of the most important lessons that Khan imparted dealt with making his work accessible to the audience. “Presentation is the most important thing and my concern is with how to make my music more interesting to the audience,” says the senior artist. It is a concern that his sons understand well. “As our guru, our father maintained that there is no rulebook as to how classical music should be presented. It has reinvented itself in every era. But now, it’s an interesting time. Classical musicians are repackaging the craft and I don’t think it takes away from the seriousness of it,” says Amaan. In their collaborations with the likes of superstar guitarist Joe Walsh of The Eagles and Grammy-winning classical guitarist, Sharon Isbin, Amaan and Ayaan have redefined how the sarod is perceived in not only the West, but also in India. “It also depends on the audience,” offers Ayaan. “What I would play to a college audience in Rohtak would be different from what I would play here to a seated audience of techies. We just have to present it in a different vessel—as far as you can maintain the tradition and purity of classical music, you will be fine. If impurity creeps in, it will die its death,” he adds.

Their first concert together on foreign shores was also in the US in 1991. “The entire flight was empty. The Gulf War was going on. We were on an Air India flight,” recalls Amaan. The senior sarod maestro performed four back-to-back concerts on the invitation of Asia Society. “We performed with him only on the last day,” says Amaan. “He didn’t allow us to accompany him on all days,” jokes Ayaan, who was then aged 14. Since that first show, they have performed multiple times in the US together at prestigious venues such as the Carnegie Hall, including a show to celebrate India’s 50th year of Independence. Again, Khan tells us that he has always been inspired by the response that he receives from an audience abroad. “I had seen a standing ovation only at the end. But that day, the three of us walked on stage and to welcome us, they gave us a standing ovation. That was so touching and so amazing,” says Khan.

Presentation is the most important. And my concern is with how to make my music more interesting to the audience, says Ustad Amjad Ali Khan

When they performed at the Levi’s Stadium in San Francisco, a most unusual venue for an Indian classical concert, considering it hosts National Football League matches, the trio was in complete harmony. As they played a tribute to Rabindranath Tagore in Raag Zila Kafi and a piece in Raag Desh, the audience, which is a select group of techies and their families, is enthralled. “Today’s audience comes prepared for whom they are going to listen to. Pehle achaanak aadmi aa jaata tha. In our field, word of mouth matters. The audience sought out artists such as Pandit Bhimsen Joshi or Ustad Bade Ghulam Ali Khan wherever they played. Word travelled from Agra to Kolkata to Chennai,” says Khan. Ayaan adds, “Today, I see happier people in the audience. They had much stronger opinions in the past. Today, they are much more open and accept you.”

Although their father isn’t so optimistic about the times we live in. More than ever now, when Indians across the country protest against the National Register of Citizens (NRC) and Citizenship Amendment Act (CAA) and for equal rights at the risk of facing police violence, Khan’s sarod offers the sweetest sounds of dissent. A great admirer of Mahatma Gandhi, Khan chose ‘Vaishnava Janato’, the 15th-century bhajan, a favourite of Gandhi’s for the UN Day Concert performance hosted by the United Nations in New York in 2018. “As musicians, we feel sad to see violence in the world. It’s because we disrespect other religions. This is why I say my family and I follow all religions. We have to realise the value of peace,” says Khan.