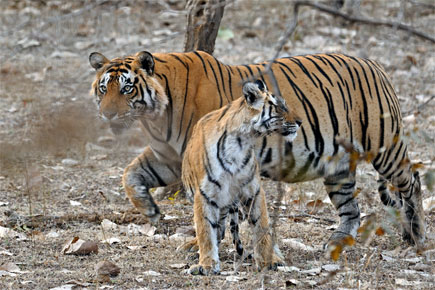 
As he scours the pale grass and swishes through a stagnant stream on a scorching June afternoon, Nature Guide Bittoo Singh wipes the sweat off his forehead in frustration. “He is a very shy tiger. We can hardly rely on him for a good tourist sighting,” he says after nearly an hour of crisscrossing the dry and rocky terrain of Zone 5 in the Ranthambore Tiger Reserve.

Usually, tigers are spotted near the waterholes dotting the sparse landscape during the summer months, as that’s where water and prey are most readily available. But T25, fondly called ‘Zalim’ by forest officials, is nowhere to be seen. Bittoo Singh nudges the jeep driver to move to another part of the reserve. His aim is to placate a jeepful of tourists. Not having spotted a single tiger in the past one hour of their journey through the parched forest, they feel let down.

After 25 minutes of a bone-jarring ride, relief comes in the form of T17, popularly known as Sundari, who graces the tourists with a brief appearance. Daughter of Ranthambore’s veteran tiger Macchli, her popularity climbed several notches last week when forest officials spotted her three cubs. “Yeh hoti hai achchi sighting (this is what a good sighting is),” says an elated Bittoo Singh, as he points in the direction of where Sundari is descending the steps of some ruins to a half-dried lake.

Amid the screechy alarm calls of peacocks and sambars that shatter the silence decreed by the predator, the tourists across the lake quieten down to aim their zoom lenses at the sight. Five minutes later, they see her going back to her cubs, vulnerable as the little ones are (to attack by male tigers, for example, who dislike future rivals). Everyone has a happy tiger story to take home.

In Ranthambore, almost every tiger has a special reputation that precedes it. It could be a toothless veteran who loves to pose for tourists and observers, her daughter who continues that legacy and doesn’t mind introducing her cubs to the world even if they are too young, or a pining lover called Romeo (T6) trying hard to hold the attention of his rather promiscuous younger companion Laila (T41), who in turn strings her regular mate along as she flirts with other options.

The story of Zalim is in a class of its own. As his reputation goes, he does not particularly enjoy human presence, and is known to chase motorcycles and vehicles when “not in the mood” to have people around at all. A bit of a wild cat who prefers to stay away from the tourist zone, T25 has marked his territory far in the forest. He was named Zalim for the ferocity with which he’d try to usurp the territory of other tigers in the vicinity, particularly that of his brother T24. “I remember times when we have had to turn back seeing him face us, growling and ready to attack,” says Balendu Singh, honorary warden of the reserve and a keen observer of big cats.

Tigers are rarely social creatures, let alone family oriented. They prefer to prowl the wilds alone, in defence of their territory or for hunting opportunities. Even female tigers are known to protect their cubs from predators (and other tigers) only till they attain the age of two, after which they leave their territory to their offspring and venture ahead to chart new spaces.

While Zalim’s territorial aggression has been consistent with what is expected of a male tiger, his recent behaviour has befuddled observers and officials of the reserve. Over the past year, Zalim has adopted two female cubs who were orphaned last February after their mother T5 succumbed to an intestinal illness and died in the hilly Kachida region near the reserve’s northwest corner. Apart from protecting them, according to observers, T25 has been playing mother to the cubs in other ways as well. This is strikingly unusual for a male, otherwise seen as a grave threat to cubs. “He has turned into quite a softie over the last one year,” says Balendu Singh, “He is hardly ‘Zalim’ any longer.”

Born sometime in 2007 or 2008, Zalim was ironically thought to be female for some time. After he separated from his mother, he was not seen much around Ranthambore. “Since there weren’t many cameras around the forest then, he wasn’t so visible. Only one picture existed of him as a young tiger,” says Aditya Dicky Singh, a wildlife photographer, “It was only after a male arrived sometime in the summer of 2009 in the Tamba Khan-Bhootkurra area [to the west of the park] that the authorities decided to reconsider their conclusions.” It took a few months of close monitoring for forest officials to confirm that T25 was indeed male.

In the beginning, T25 was referred to as the ‘dollar male’, thanks to a dollar symbol-like mark on his right. He acquired the name Zalim only a couple of years ago, when Rajasthan’s tourism minister asked the officials to assign tigers names instead of numbers, and they remembered him for his snarls and roars.

It took about a year for his odd behaviour to be noticed. “When we saw him around the cubs [of T5], we thought he had come to prey on them,” says Balendu Singh. A closer study of video recordings that had captured his movements, however, revealed that Zalim’s strut when he was around the cubs was more in the nature of a tiger patrolling his territory. He was not stalking them.

To his surprise, Balendu Singh even saw the cubs trailing Zalim, perhaps to watch and learn, as they would their mother. Singh noticed a cub sniffing around for the territorial markings of other tigers. It was obvious that the cubs were under training.

Might Zalim be their father? While the authorities consider a DNA test to confirm their paternity, Balendu Singh is convinced of it. Zalim, he says, was the only male seen around T5 before the cubs were born. Over the past year, Zalim has been sharing his kill with Bina 1 and Bina 2, as the two 18-month-olds are now called. So testifies YK Sahu, divisional forest officer, who says a ranger saw Zalim preying on a buffalo in the Kachida area. After killing the prey, he left it for the cubs to feed on. Says Sahu, “It is possible that he is teaching them how to hunt.” The cubs have been seen taking down a neelgai by themselves too.

Earlier this year, a brief encounter Zalim had with former mate Sundari gave the story another twist. Around dusk, Zalim and Bina 1 were lolling in the evening sun over the scrubby dry grass by a waterhole, when the cub got up and moved away a little. In the meanwhile, as sambar calls arose all around, Sundari spotted Bina 1 and dropped her shoulders to assume a stalking posture for an attack. “We were all stunned and wondered what would happen. Sundari had been Zalim’s mate earlier and we wondered what her presence would mean now… it looked like she was ready to prey upon Bina 1,” says Balendu Singh, who has filmed the entire sequence.

Then, in a dramatic turn of events, Zalim emerged from the right, stood in front of Bina 1, and gradually started moving towards Sundari, who, in response, meekly sat down. “The cub, meanwhile, slipped away and there was a brief exchange of sorts between the two tigers. A perplexed Sundari tried to charge at Zalim, but then turned back. It was official now. Zalim was indeed the cubs’ protector.”

Zalim’s behaviour may seem odd for a male tiger, but according to Rajesh Kumar Gupta, Ranthambore’s field director, male tigers in the reserve have been displaying signs of paternal affection for some time now. He claims that as many as six tigers here have shown some kind of social affiliation, of late. “I saw a female, T19, sitting with her three cubs in the territory of T28, who is supposed to be the father of the cubs. One of them moved towards the male and eventually sat with him,” he says, “This is unusual for tigers but quite a common sight in Ranthambore.”

Gupta attributes this behaviour to the small size of the park. It covers only a little over 1,300 sq km and is home to about 50 tigers now. “There seems to be a strong urge to control infanticide—as in Zalim’s case perhaps—and maintain control over the gene pool and territory,” Gupta speculates, adding that an in-depth study is required to ascertain his observations.

Hemraj Meena, a senior nature guide who has been watching tigers for over 20 years, cites a skewed sex ratio within the forest as another reason for this change in behaviour. “There is only one female for three males, so there is this urge to keep the gene pool alive. Tigers are now sighted in pairs—as the male prefers to keep the female by his side while she has options to explore,” he says, citing the Romeo-Laila example.

In Zalim’s case, Hemraj Meena says that it looked at first as if the full-grown male was greedy for the live bait—goats tied to trees—left by forest authorities for the cubs. Reserve cameras once captured a large male paw grabbing the goat in one swipe, much to their horror. “But we now see them ‘hunting’ [live bait] on their own, so that doesn’t seem to be the case,” he says.

Hemraj now suspects that Zalim is protecting the female cubs as potential mates. Zalim had mated with Sundari in November last year (note that adult tigers do not mate only for reproduction), but she had her three cubs with T28. Incest is common among territorial cats, with male and female siblings often mating after they separate from their mother. It occurs across generations too; Zalim’s mother T22 is known to have mated with his brother T23 a few years ago. It’s just that cubs are almost never born of incestuous couplings. In Ranthambore, however, Hemraj claims that such matings have borne offspring. “The proof of inter-breeding lies in the shrinking physical size of the tigers and the lightening of stripes with each generation,” he says, though the phenomenon has not been properly studied yet.

Whether it is fatherly love or sexual instinct, Zalim’s natural or unnatural ‘motives’ seem hazy at the moment. In yet another interesting twist to this tale, Bina 2 has lately been showing reluctance to accept Zalim’s authority. “She stays around, but it is Bina 1 who follows the male like a shadow, and stays close, playing with or sleeping near him,” observes Balendu Singh. “ In contrast,” he says, “Bina 2 keeps to herself—she is more dominating and seems to have a mind of her own.”