The Bluegrass Journeymen bring together Rabindra Sangeet and mountain ballads 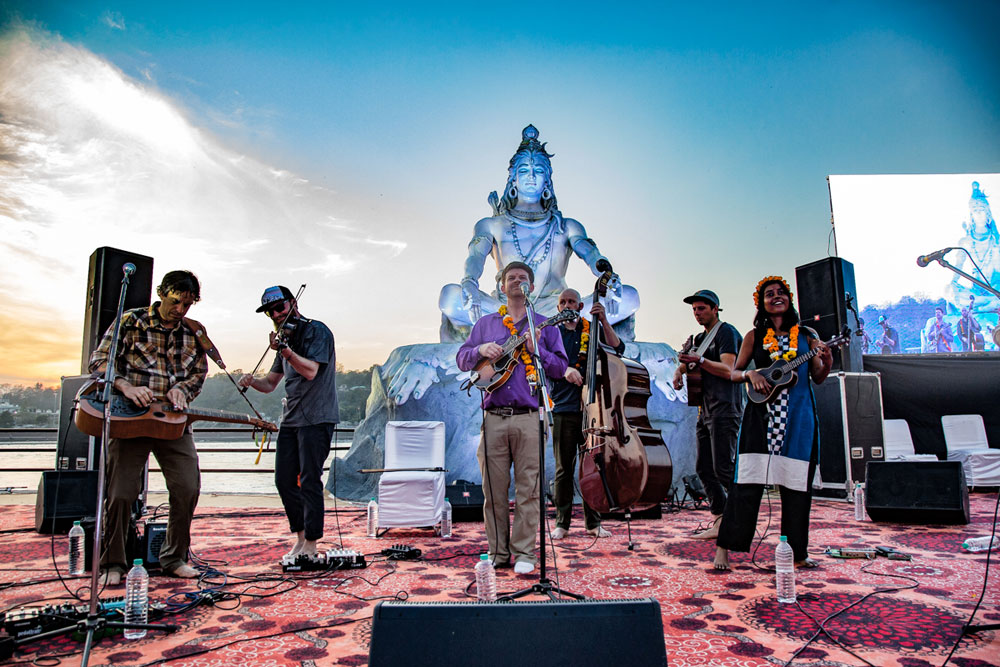 
Bluegrass icon Doc Watson was a late bloomer, recording his first solo album when he was 41. The American guitarist, known for his flatpicking style, went on to win seven Grammys and a Grammy Lifetime Achievement Award. He lived until 89 in Deep Gap, where he was born and was rendered blind at the age of two. In the song, ‘Miss The Mississippi And You’, Watson sings, “Roaming the wide world over / Always alone and blue, so blue / Longing for my homeland, muddy water shore / Miss the Mississippi and you,” and you can hear the ache in his baritone to return to his home after 300 days on the road, every year for 26 years of his life.  Originally recorded by Jimmie Rodgers, another Bluegrass star who was one of Watson’s earliest influences, ‘Miss The Mississippi And You’ was released in 1932.

When American slide guitarist Billy Cardine heard Nabanita Sarkar sing this old Bluegrass tune, he couldn’t believe his ears. Cardine, who plays the dobro, the resonator lap-style guitar, with the American bluegrass band, The Bluegrass Journeymen, recalls that Sarkar and he sat up all night and worked on a new version of ‘Miss The Mississippi And You,’ when they toured India in February. “We met at Shantiniketan and I remember Billy telling me that he could see these mountains that I was singing about from his backyard,” says Sarkar of her meeting with Cardine in 2016.

The Appalachian Mountains in North America, where bluegrass music was born, were home to immigrants in the 1700s, including enslaved Africans and working-class Scottish and Irish who were indentured labourers. It is impossible to imagine bluegrass music without the distinctive twang of the banjo, an instrument that was brought to America by Africans and the sprightly fiddle that is also central to Celtic folk music of the Scots and Irish.  Bluegrass became defined as a genre some two centuries later with Kentucky-based mandolin player Bill Monroe leading the band, Blue Grass Boys.


Known as the “Father of Bluegrass”, Monroe is a hero for many musicians including The Bluegrass Journeymen’s founder Patrick Fitzsimons, a self-taught musician. “I got my training by attending bluegrass festivals,” he says. Also a mandolin player, Fitzsimons says, “Bluegrass music has vocal harmonies and the way that the instruments interact with each other is closer to jazz. We take breaks like in jazz. The second generation of bluegrass musicians (such as Doc Watson) brought in elements of rock and roll and there was more jamming involved. Now my band has moved further East to incorporate more world music,” he says.

Fitzsimons has had a long association with India, having first visited the country in 2011. But it was only a few years later that the idea of adding an Indian sound to the band took shape when he met mandolin player Diptanshu Roy, who led No Strings Attached, a bluegrass band based in Kolkata. “Denver, where I live, is the hub of bluegrass music and it’s easy to find several bluegrass musicians, but I didn’t think I would ever find bluegrass music in India,” says Fitzsimons.

Roy also introduced Fitzsimons to Baul musicians in India and their first jam session was out in the open in Shantiniketan. “I found out then that Baul flowed together quite well with bluegrass. Different kinds of music can come together without too much trouble,” says Fitzsimons, making it sound as natural as a fluid taking the shape of the vessel it is poured into. But much like bluegrass, Baul and Rabindra Sangeet are known for sentimental ballads, themes that evoke a sense of nostalgia and a love of nature. “These are also forms of music that build a feeling of community and by coming to India, I want to get to know the language and culture to make that community a much larger one,” adds Fitzsimons.

I found out then that Baul flowed together quite well with bluegrass. Different kinds of music can come together without too much trouble, says Patrick Fitzsimons, musician

Much before The Bluegrass Journeymen looked to India for a shift in sound, Bengali bands such as Moheener Ghoraguli, which led the independent folk-rock movement in the 1970s, fused Bengali folk songs with American folk music. So it’s no surprise that the next album by The Bluegrass Journeymen will include a version of Moheener Ghoraguli’s 1979 release, ‘Ei Sure Bohudure’. “Moheneer Ghoraguli was, in fact, the first band that was harmonising and vocalising in a style similar to bluegrass,” says Sarkar.

It was after Sarkar, who was previously a vocalist with No Strings Attached, joined the band that Rabindra Sangeet found its way into The Bluegrass Journeymen’s repertoire. “I’ve known these songs all my life,” says 25-year-old Sarkar. ‘Badal Baul’, written by Rabindranath Tagore, is one such track that Sarkar performs with The Bluegrass Journeymen and one that will feature on their next recording. ‘Badal Baul’, written in 1922, is an ode to rain and the sweet music that the monsoon brings with it. The bluegrass version is a slow, rambling tune that allows the vocals to shine. “As a language, Bengali suits bluegrass,” says Sarkar.

The vocalist, who has trained in Indian classical music, has had an unusual trajectory, singing with metal, rock and blues bands in college. Besides being part of The Bluegrass Journeymen since 2017, Sarkar is also the vocalist of Kolkata-based jazz band, Mondegreen. “Bluegrass is probably my favourite genre because there’s so much to learn from it, even in terms of songwriting,” adds Sarkar who also plays the ukulele when performing with The Bluegrass Journeymen.

Cardine helped bring Sarkar’s world of music closer to his rather effortlessly, explains the vocalist. “Billy was quick to learn the Indian tunes,” she adds. One of the compositions on the band’s performance set list is ‘Didi Gelo Koi Koi’, a modern Bengali song written by Arunendu Das, a celebrated songwriter and guitarist, whose work influenced the early independent folk rock music scene in West Bengal. ‘Dakhina Baataash’ is another song by Das that the band plans to record for their next album. “I’ve always seen the connection between folk music from different parts of the world. As a kid too, I remember collecting recordings of folk music from around the world while other kids collected baseball cards,” says Cardine.

Cardine’s appreciation of Indian music began in 2005 when he started training in Indian classical music under Pandit Debashish Bhattacharya. “I was in NYC and wandered into a music store where there was a VHS tape that was playing Pandit Bhattacharya’s concert video. He’s one of the most proficient slide guitar players that I had heard and I immediately knew that I wanted to learn from him,” recalls Cardine. It was fortuitous then that Bhattacharya was teaching a special semester on Indian classical music in NYC. Cardine signed up for it and also learnt how to play the Chaturangui, a 24-string Indian classical slide guitar designed by Bhattacharya. “We later played a concert together in Asheville,” adds Cardine, who even composed an instrumental piece titled ‘ChatuVonDoo’ with Bhattacharya playing on it. The track also features on their live album titled Live At Piano Man, New Delhi that was recorded in 2017 and released last year.

With eight members, The Bluegrass Journeymen has packed theatres in India and the US. Besides Fitzsimons, Cardine and Sarkar, the band includes Coleman Smith on fiddle, Shaun Nicklin on banjo, Andrew Conley on cello, Summers Baker on guitar and Jean-Luc Davis on the bass. One of their standout tracks is the band’s interpretation of Grammy Award-winning mohan veena player Pandit Vishwa Mohan Bhatt’s composition ‘Carukesi’. “Since (American banjo artist) Bela Fleck had collaborated on the original with Pandit Vishwa Mohan Bhatt, it was easy for us to take our cue from there,” says Fitzsimons.

Another popular song of theirs is ‘Ekta Golpo Boli Shono’, a Bengali track originally composed in the 1970s by theatre artists and activists, Ajit Pandey and Ajitesh Bandhopadhyay. With a fiddle solo and Fitzsimons joining in on the chorus in Bengali, The Bluegrass Journeymen transformed ‘Ekta Golpo Boli Shono’ into a joyous, mountain ballad. “I tend to meet Bengalis at the shows and all of them tell me how exciting it is to hear a Bengali song along with bluegrass,” says Sarkar. But what often gets the loudest cheer from an Indian audience is when the band has fun with the Hindi film hit, ‘Tujhe Dekha Toh Yeh Jaana Sanam’ from Dilwale Dulhaniya Le Jayenge. “Nabanita deserves credit for all the Bengali songs, but it was my idea to do the Bollywood song. I was convinced when I heard the mandolin on it,” says Fitzsimons. The bandleader, like every other Indophile, loves Bollywood and aspires to make music for a Hindi film soundtrack someday. “I’d love to work with Arijit Singh,” he says of the popular Hindi playback singer.

This year, the band returned to India for the fifth time for a month-long tour. Starting February, The Bluegrass Journeymen performed across the country from Chennai to Darjeeling to Rishikesh. Sarkar, the vocalist, and Cardine have collaborated on an album called Billy & Bonnie that they hope to release this year. “We had a day off in Kolkata and decided to go into the studio to record a couple of songs,” says Sarkar, who is pursuing a Master’s at Hazra Law College in Kolkata. The singer also had plans to tour with Fitzsimons later this month, but the shows have been postponed indefinitely as venues remain shut to control the spread of Coronavirus. “We were going to call it Indograss,” she says of her project with Fitzsimons.