Many people who have never sailed, for whom purchasing a hatch is too expensive, are now beginning to take to it 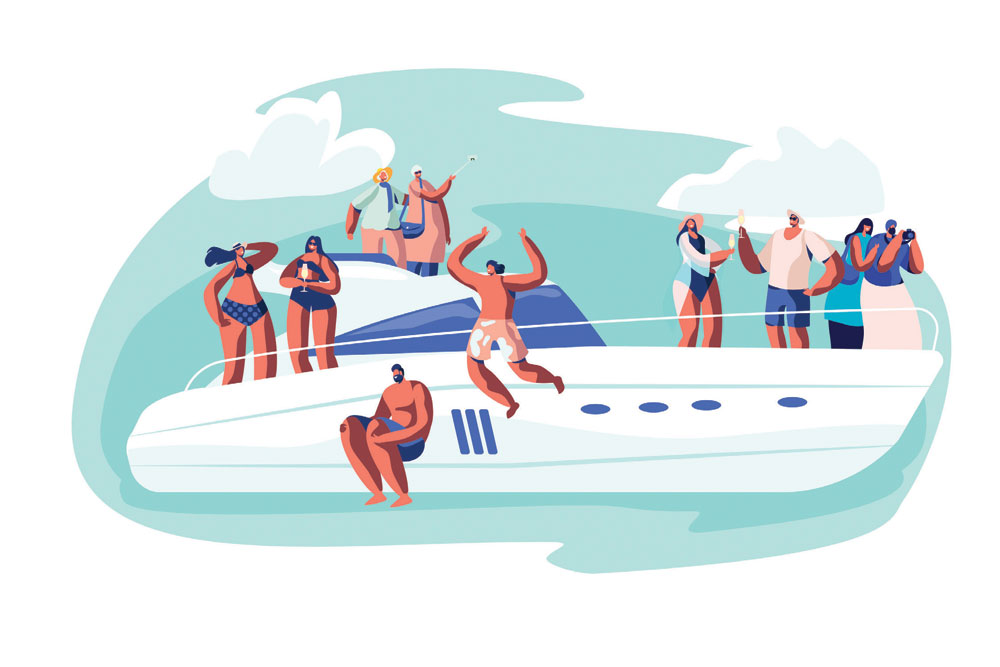 
It was several years ago when Shakeel Kudrolli turned to his wife with a question. “We’ve got such a vast and beautiful coastline [in India],” Zia Hajeebhoy recalls her husband telling her. “But why isn’t anyone sailing here?”

The Indian coastline, unlike the popular perception, with its warm and calm waters, and stable winds, Kudrolli and Hajeebhoy inform us, makes for one of the best sailing conditions in the world.

Hajeebhoy and Kudrolli had got acquainted at sea. They had come from different backgrounds (Hajeebhoy was a marketing professional then and Kudrolli a corporate lawyer) but had met over a common passion—the small sailing community in Mumbai. Kudrolli was already a well-known sailor then. He had started early, enrolling himself when he was around 10 years old at the Sea Cadet Corps (SCC) in Mumbai, the voluntary youth organisation that aims to build what it calls character and discipline by using nautical training, then participating in and winning sailing competitions (most notably India’s first ever gold medal at the Asian Championships in China in 1989, silver medals at the Enterprise World Championships in Zimbabwe and South Africa later) and thereafter volunteering and coaching children at the SCC itself.

The answer to Kudrolli’s query was obvious. “We lacked a sailing culture. We are fearful of the water, the sea,” he says. But this absence of a sailing culture, according to Kudrolli, isn’t because of a lack of interest in the activity. It’s because we just haven’t tried it out, he says. “The most that many of us do is take a ferry ride like the one at the Gateway of India, or we take paddleboat on a lake. Where are the boats, sailing infrastructure anyway?”

In response, and sensing the possibility of marrying their passion for sailing with a business opportunity, Kudrolli and Hajeebhoy quit their jobs and, with eight boats, set up Aquasail. They began to conduct introductory courses and training programmes, corporate events and sailing trips, and while their business grew, from four boats to 80 different types of boats and yachts today, this was still gradual and cumbersome.

Sailing, for all their efforts, was still viewed mostly as an expensive and remote activity.

Then, a few years ago, they introduced a membership programme. It is something of a timeshare model, like the ones we see on land, at holiday homes and resorts, where an individual buys the right to use the property or a range of properties for a certain period annually. At Aquasail, the individual instead buys a certain number of trips on their vessels. This model, however, is a little more complex. One also gets, under various packages, learning sessions, varying discounts on trips once the allotted trips are exhausted, and the ability to switch between different types of vessels across different locations in Mumbai, Goa and Alibaug. The prices of the packages vary. But the cheapest one comes as low as Rs 15,000 annually.

“It’s really begun to take off,” Kudrolli says. “We are getting different types of people, from those who have never sailed before to serious sailors.”

Sailing is viewed as an expensive activity in India. And for good reason. Most yachts and boats cost around and often more than Rs 1 crore. They are the playthings of billionaires, the sort one occasionally chances upon off the coast of Mumbai, bobbing at a slightly luxurious distance, when one takes the crowded ferry off the Gateway of India.

But it’s beginning to change. Many people who have never sailed, for whom purchasing and maintaining yachts is too expensive, are now beginning to take to it through membership programmes, timeshare options and fractional ownership models. According to sailing companies, they have developed such models because they think these have the potential to do very well in a nascent sailing market like India. They point to the popularity of the sharing economy, to the success of companies like Uber and Airbnb, and ask, if the idea can work on land, why can’t it work on the sea?

“It’s just like [buying a timeshare package at] a holiday resort,” says Aashim Mongia, the founder of West Coast Marine Yacht Services while explaining how the model works at his company. “Except, here it [the resort] is a yacht out at sea.”

Mongia, a former naval officer turned sailing entrepreneur, established his company in the mid-1990s. It offers a wide variety of yacht-related services, from selling yachts, providing chartered services and the maintenance of others’ yachts to developing marinas and pontoons. About 10 years ago, he began to sell yachts under the fractional ownership model.

In such a model, anywhere between two and five or more people come together to buy a single yacht. Here, the costs of buying and maintaining the vessel are split and each individual becomes a co-owner of the vessel. Of course, individuals can come on their own, informally, and become fractional owners. But through a professional fractional management programme offered by companies, such as Mongia’s, the company looks after all aspects of the vessels’ maintenance and upkeep, coordinates schedules, leaving the owners free to enjoy their vessel until the time comes when they decide to sell it and divide the proceeds.

Such a model of fractional ownership doesn’t only make owning a yacht more affordable—Mongia points out that a popular vessel purchased by fractional owners, the 31 Silvercraft, when purchased individually, costs between Rs 85 lakh to Rs 1 crore in India, but when split among three individuals, the sum can come down to about Rs 30 lakh each—it also makes more sense because a boat will spend most of its lifetime unused.

“Nobody takes the yacht out every day,” Mongia says. As he observes, citing the example of the Mumbai coast, sailing is permitted for only about seven-and-a-half months in a calendar year. For the rest of the year—from sometime in May till September—the sea is closed because of the monsoons. “Typically, in that period [of seven-and-a-half months], you will find a person taking his boat for maybe 30 days,” he says.

“It’s like golfing,” Hajeebhoy explains. “You love it and you think you will go to the greens every third day. But you will really only be coming once or twice a month.” The rest of the time, the vessel lies unused, depreciating in value, docked by the harbour.

Hajeebhoy, however, explains that this concept of fractional ownership hasn’t taken off quite as expected. Having to share a vessel among many people, she says, can sometimes get ‘sticky’. And when they decide to sell it, because the market for yachts is still so small in India, it can be difficult to find buyers.

The sales in the fractional ownership model, she points out, also do not necessarily reflect a big interest in sailing. “You have to remember,” she says, “fractional ownership became quite big about 10 years ago. But this was mostly people buying speedboats, not yachts. They weren’t sailing. They were using it as a means of transportation.” She adds, “What happened was a bunch of people in Mumbai began buying homes in Alibaug. They needed to take the boat to Alibaug, but they didn’t want to travel with the hoi polloi.”

The real uptick in sailing appears to be happening around the timeshare model. “What we have realised,” Mongia says, “is that people like to experience sailing, but don’t want to own [a yacht].”

Aquasail’s membership programme, about two years old, has over 100 members. The programme is growing more rapidly now, Hajeebhoy says, acquiring on an average a new member every day.

When it comes to sailing as a leisure activity, India is still a very new market. “It’s not like the European market where you have a readymade demand. Here you are building the entire product of leisure boating from scratch,” Kudrolli says. But with these new models of timesharing and membership programmes, it’s beginning to improve.

“We are at that moment where marathon running or [deep-sea] diving was a few years back. Very few did those activities then. But look at it now. People do holiday trips around these activities,” Kudrolli says. “I know how addictive sailing can be. I am at that stage right now getting them hooked to it.”