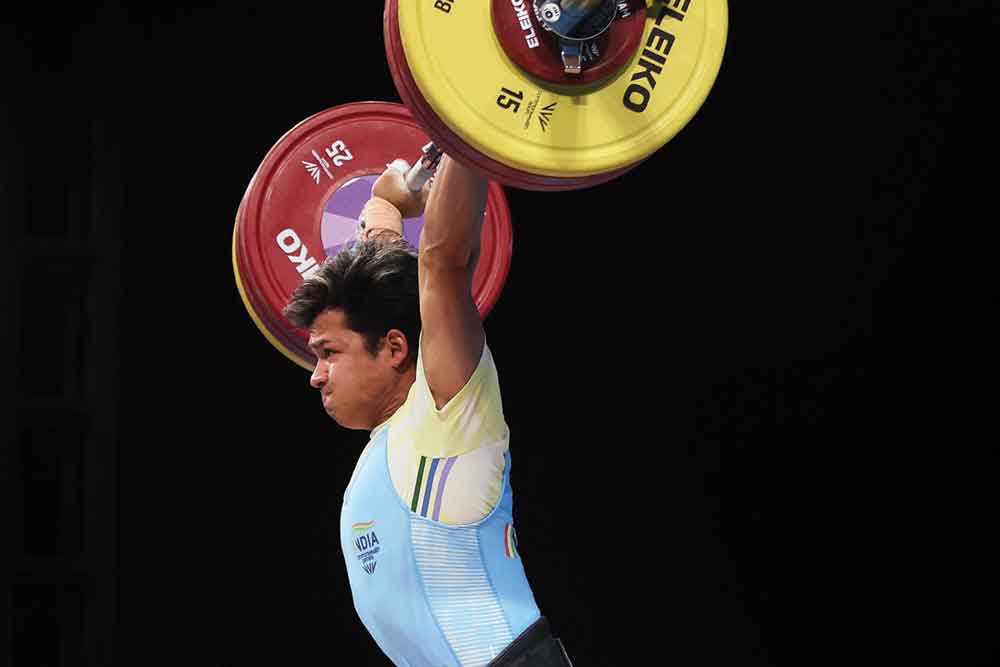 
DURING THE 67 KG weightlifting competition at the Birmingham Commonwealth Games, you could see the two aspects of Jeremy Lalrinnunga’s personality. At first, he was pure swagger. In just his first Commonwealth Games (CWG), the young Mizo weightlifter with blonde-tipped hair and a silver stud in his left ear, was lifting weights in the snatch phase of the competition as if he was at his home gym. There was no exaggerated fist-pumping or screaming, as Lalrinnunga calmly lifted a best of 140 kg, 10 kg better than anyone else in the competition.

In the second phase of the competition—the clean and jerk—there was anything but swagger. He fell to his knees after lifting 154 kg in his first attempt, crawled off the stage after lifting 160 kg in his second, and then fell to the stage once again in his third, albeit unsuccessful, bid of 165 kg, holding one elbow and wincing in pain.

As it turned out, Lalrinnunga had suffered a severe bout of cramps, pulled a muscle and injured an elbow in these attempts. He wasn’t even following what was going on in the competition—he lay on the floor backstage between his attempts, getting rubdowns, wincing in pain, while his coach was setting the weights.

But Lalrinnunga hung in there. He won not just a gold, but also rewrote two CWG records (that of 140 kg in his snatch, and the overall lift of 300 kg). Only 19 years old, this weightlifter who had been earmarked as a weightlifting prodigy nearly four years ago when he became the first Indian to win a gold medal in Youth Olympic Games, had delivered on his promise.

Lalrinnunga, who hails from Aizawl in Mizoram, first became interested in weightlifting when he was about nine years old. The son of national-level boxer Lalneihtluanga Ralte, who had given up his sporting career to take up a job in the Public Works Department to support his family, Lalrinnunga had begun training at the state academy in Aizawl. Soon, a coach visiting from the Army Sports Institute in Pune spotted the nine-year-old’s potential and had him relocate to the institute.

Lalrinnunga comes from a humble background. One of five children, his father, according to media reports, earned a daily salary of about `370. When the young weightlifter returned from Pune on a short break in 2012, the family did not even have the required money to pay for his return fare. “But he told me it would be enough if we give him `50. He said he would sit on top of a bus till Guwahati, and sleep next to the toilet on the train till he reaches Pune,” his father Lalneihtluanga told the Northeast portal, EastMojo. “Anytime he tells me he will achieve something, he does not give up until he achieves it.”

Although Lalrinnunga has been viewed as a bright prospect in weightlifting for some time, especially after his triumphs in the junior circuit, this CWG gold medal is really his first in a major senior competition.

The transition from the juniors to the seniors, even for the most gifted sportspersons, is never easy. It can be especially difficult in sporting events like weightlifting where one can get injured frequently. And Lalrinnunga appeared to be going through his own share of troubles, his body suffering a number of injuries, from the knees to his spine and upper back, in recent times.

He had come into the CWG as a favourite in his category. After all, he holds all three national records in the 67 kg category (141 kg in snatch, 167 kg in clean and jerk, and 306 kg in total), and last year, had won the gold at the Commonwealth Championships. But it was always a question of whether this talented youth could build on his potential.

Lalrinnunga now wants to move into the 73 kg category for the Paris 2024 Olympics. That road is, of course, far from smooth. He won’t just have to increase his weight, the level of competition, too, will be higher. But looking at how this young Mizo weightlifter with a cherubic smile battled his way through injuries and cramps to win the CWG gold, who can count him out?