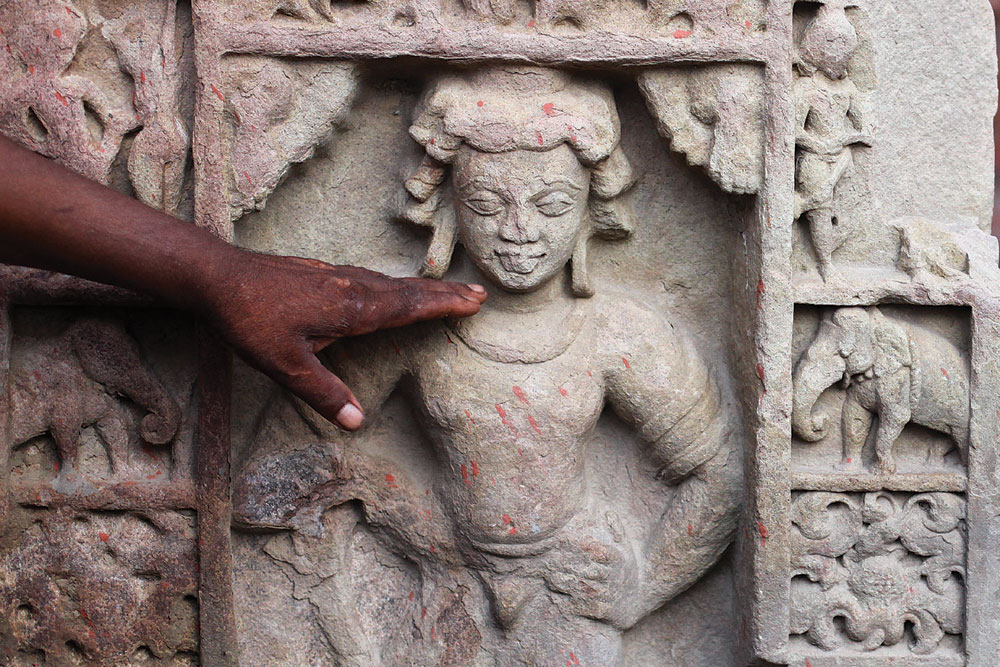 Remains of a temple dating back to the Gupta period in Bilsar village, Etah district, September 24 (Photo: Raul Irani)


TRANGERS, MOSTLY FROM neighbouring villages, have been landing at Harinandan Dixit’s doorstep to “see the idol” for as long as he can remember. “People believe that my home is built on the remains of an ancient temple and that my family has the main idol secreted away. My great grandmother had once mentioned that there used to be two rooms here, built from the same bricks as the temple but they collapsed in the rains of 1904. Nothing remains. But the talk refuses to die down,” he says. The only reason why I am sitting in Dixit’s courtyard is the residents of Bilsar, a village in the Etah district of Uttar Pradesh, insist, behind the family’s back of course, that there is a 5th century idol in their home. And such talk is only going to intensify.

In early September, the Agra circle of the Archaeological Survey of India (ASI) undertook its annual cleaning work in Bilsar, a protected site since 1928 when the British had discovered four pillars here. “Two pillars are monoliths with inscriptions on them. The other two pillars are a small distance apart, with carvings on three sides. The back of both is plain. The distance, the carving, the seeming height of the pillars—all of these have always suggested that the carved pillars marked an entrance to some sort of structure,” says VK Swarnkar, superintending archaeologist, Agra circle, ASI. Excavation was undertaken to know the depth of the two carved pillars which led to the unearthing of a well-finished flat stone. “Was this the plinth or a step? We weren’t sure but then again the pillar wasn’t resting on it which led us to dig further.” What were eventually unearthed were three more steps. The last one had an inscription in shankhalipi, the shell script, and led to a platform. The excavation had to be stopped as it ran out of space. The platform abuts a boundary wall built by ASI and just across the boundary wall is Dixit’s home. “It is obvious, from the carvings on the pillars, that they are part of a temple complex. We got the script analysed by Professor VK Handa of Chandigarh who is an expert in shankhalipi. The inscription is “Sri Mahendraditya”, the title of Kumargupta I of the Gupta dynasty, thus placing the age of the structure in the 5th century. A similar inscription in the same pattern was found on a stone horse statue in Lakhimpur. The statue is now in the Lucknow Museum,” says Swarnkar.

Under Kumargupta I, the Gupta dynasty extended from northwest India to Bengal with fluctuating borders according to Meerut-based historian Amit Pathak. “The Mathura belt which included Mainpuri, Agra and Bulundseher were a single cultural zone with Mathura being the centre. It was under the Guptas that structural temples were first built though this belt is now more or less bereft of original Gupta period buildings. What we do have are parts of structures, such as the ones found at Bilsar,” he says. Only two structures from this period were known so far. One is Sanchi 17, a temple in Sanchi, a square structure with a porch and four pillars at the front. The other is the Dashaavtara temple in Deogarh, Uttar Pradesh, again dating back to the Gupta era. A Vishnu temple, it is adorned with intricately carved figures of Vishnu and several other gods and goddesses from the Hindu pantheon. It is one of the earliest stone temples still surviving and provided valuable insight into how temple architecture in north India developed. The Bilsar temple remains will now add one more to that list. Coins from Kumargupta I’s reign identify him as a Vishnu worshipper too but various faiths flourished under him. Swarnkar is reluctant to identify the remains at Bilsar saying the Guptas were known to patronise Buddhism also. “It is difficult to ascertain whether the figures carved on the pillars are gods or yakshis. The scope of the excavation is limited because the village has expanded all around it.”


In Bilsar itself, there is an undercurrent of excitement over the findings but little room for doubt. Men and women troop into the ground where the pillars stand, motivated by both curiosity and piety. They observe the figures and then reach out reverentially with the time-honoured gesture of prayer. They interpret the carvings variously as Durga and Shiva. “Teams from Thailand and Cambodia have come to study these pillars in the past in a bid to prove that this was a Buddhist temple, but we know that this is a Hindu temple. Even we are aware of history,” says local resident Ram Bhajan. The shankhalipi inscription is all but covered with mud left over by the incessant rains of the past few days and the villagers offer, with great enthusiasm, to clean it up.

Under Kumargupta I, the Gupta Dynasty in the fifth century extended from northwest India to Bengal with fluctuating borders. Only two structures from the Gupta period were known so far. The Bilsar temple remains will now be the third

The four pillars were identified as Gupta period remains by the British and the site declared protected as early as 1928. Nearly every villager has an inherited memory of what happened when the British came and all of them involve supernatural elements. “The angrez DM came on an elephant which was driven mad. It is believed that he later became blind,” says Bhajan. What is indisputable however is that the remains of sculptures are often dug up in the village. The villagers however are loath to discuss them. “There is a firm belief here that what comes from out of the ground has to be returned. If you keep an idol, then a terrible fate awaits you,” says Anant, a local freelance journalist. He admits however that there has also existed a flourishing “antique” trade here. Pathways to most homes are lined with slabs and bricks that have been removed from the site and the locals point this out with a mix of sheepishness and pride.

But if all of this suggests that the site is of great reverence for the locals, then nothing could be further from the truth. Swarnkar says it was being used as a garbage dumping ground by the locals until ASI built the boundary wall a few years ago. Today the site has been cleaned considerably but remnants of garbage, broken beer bottles, discarded plastic bags and a disemboweled plastic doll remain. The two pillars are particularly overlooked, having long served as a tying stoop for cattle. “There is a general fallacy in India that the community is going to care about sites in their midst. They are more consumed by the thought of their rozi-roti, so how and why will they care? We have to demonstrate that heritage can lead to social and economic development of communities resident in heritage areas for that to happen,” says Ratish Nanda, CEO, Aga Khan Trust for Culture.

There is talk among the locals about the plans ASI and the Government may have for the remains; some speculate there will be a museum and wonder what that could mean for them. There is immense pride in Bilsar’s historical significance but not because of the Gupta period connection. The village and its surrounding areas boast of several temples, each of which, the locals claim, is older than the Gupta dynasty. The legends of local Kings—Hari Singh, Vir Singh and Bir Singh—are what shape their identity. A temple dedicated to a local priest, Puranmal, believed to have been killed by Bir Singh’s son, Ram Chandra, is the focal point of the village’s cultural and religious identity. The inner sanctum of the temple, a few metres from the heritage site, is filled with broken sculptures and stone figurines. Nanhe Lal, a local who works in the city of Raja Ka Rampur, insists that these are the fossilised remains of saints who died in the area. Indeed, there are many pathways and cleared-out areas in the village where one is warned not to walk or venture with shoes on because a saint had chosen to give up his life there. These folk legends have been handed down over generations.

“In India we have long tried to fit myths and legends into our realities and create stories,” says Pathak. “For centuries, north India was denied standard religious institutions. The oldest temples you will find in the northern belt, barring a handful, are either from the British era or the Maratha period. Structures were built but without an idol inside and these were meant to be symbolic homes for whoever the local deity was. Even today you can see these shrines, which are little more than miniature temples, dotted across highways. Each of them, even today, is dedicated to a local saint or deity who has saved the village or the community from dangers and adversities. There was a time in our history when myths were integral to the survival of communities. They allowed people to hold on to their cultural identities, retain a sense of who they were and what they had once held dear. But that time is gone. We need to transverse these myths. They don’t stand rational scrutiny, but people’s sense of identity is deeply rooted in it and questioning is taboo,” Pathak adds. Indeed, in Bilsar you could perhaps get away with speculating that the remains of the temple may be Buddhist but not about the legend of Puranmal. Kumargupta is a new name for the locals, one they are in the process of identifying. “If you Google the name, it is Gupta with an A. I thought it should be ‘Kumargupt’,” says Ram Khiladi Pandey.

Right now the site remains unlocked with easy access for anyone who wants to visit. Swarnkar says that with the realisation that the pillars mark the entrance to a temple, the villagers have become more cognisant about using it as a dumping ground. “There is awareness that Bilsar is in the news and hence they have to be careful.” The locals now hope that this is perhaps only the start of a windfall, both in terms of tourism and treasure. CP Pandey, the village pradhan says there is a deep sense of pride among the residents for being host to such an illustrious monument, but more work needs to be done. “Legend is that the Britishers tried to pinpoint the exact location of the temple with sensors, but it kept shifting position. ASI should determine the exact location. There is treasure buried here and it needs to be excavated.” The lone voice of dissent is that of Harinandan Dixit who is just tired of the speculation and says, “I will not get a single brick of my home removed. Baba Puranmal won’t stand for it.”