The Age of Fantasy

May the best myth-making win 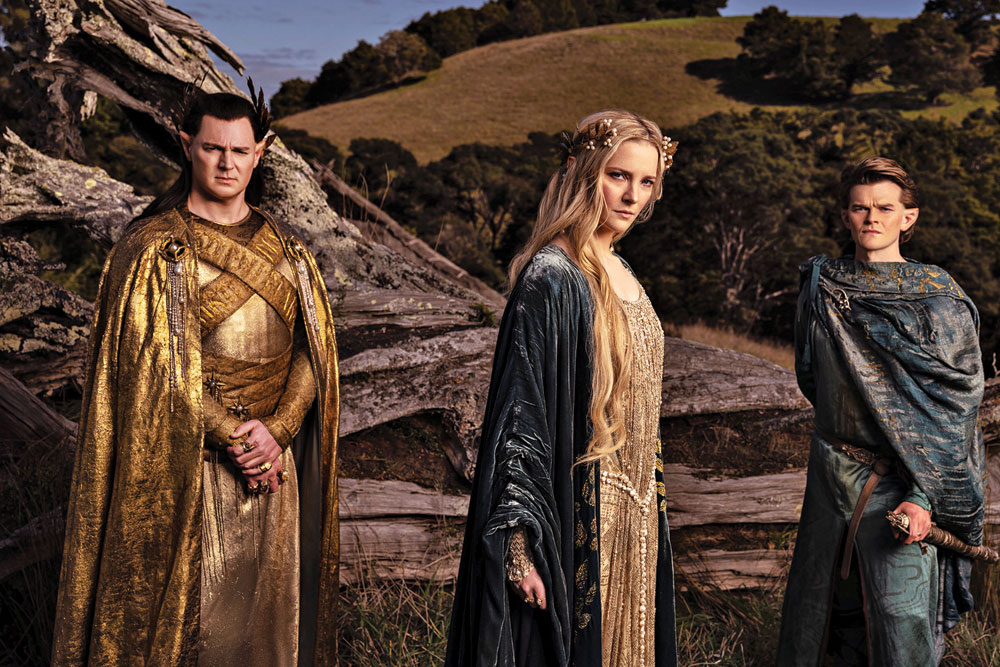 A scene from Amazon Prime Video’s The Lord of the Rings: The Rings of Power


CLIPPED BRITISH ACCENTS, platinum blonde wings, lots of computer-generated effects, and ambi­tious young women who hope to rule kingdoms one day. It’s usually enough for viewers to have one series every few years that treads the path of Game of Thrones. But the enormously competitive streaming wars have forced OTT services to pull out all the stops to capture viewer atten­tion. So, Disney+Hotstar broadcasts a prequel to HBO’s Game of Thrones, one of the most beloved fantasy series of all time, while Amazon Prime Video airs The Rings of Power, the prequel to The Lord of the Rings.

Both are inspired by books—one by George RR Martin, and the other by JRR Tolkien. House of the Dragon cost HBO $150-200 million for season one, while the season one budget of The Rings of Power was an estimated $465 million. Its public­ity in India alone cost `5 crore, which included the visit of the star cast to India, one of four global stops (the others being London, Mexico City, and Los Angeles).

Who will win the fantasy wars? Will it be the prior knowl­edge of the Game of Thrones universe? Very rapidly in the first episode itself, it establishes its modus operandi. Dragon-loving young woman, looking a bit like Daenerys Targaryen from Game of Thrones, is anointed the heir and an angry white man, the king’s brother, wants what she has—the possibility of the Iron Throne. And how do we know he will be trouble? In the classic Game of Thrones way, we see him positioned among a sea of writhing naked bodies, dissing his brother. We have already by now seen him unclothed, doing unmentionable things to a woman, also unclothed, so it is not such a shock, except per­haps to fans of The Crown, who last saw Matt Smith, the actor playing the brother, as the somewhat more sedate Prince Philip. The Queen will not be amused.

One could argue that these epics exist only to provide work to British actors trained at tony drama schools. Or equally that these epics exist to give American TV executives some perverse pleasure in disrobing their former colonialists and exacting some sort of historical revenge. What is doubtless is this: if the big screen is ruled by superheroes in latex costumes, the small screen hopes it will be dominated by men and women in bejewelled costumes that look vaguely like Banarsi brocade. Currently, Marvel/DC superhero movies work brilliantly at the box office, winning a quarter of the domestic marketplace in the US. A parallel universe where American heroes still win wars, albeit of the galactic kind, is a tempting prospect to live within a world where China and Russia routinely thumb their noses at the red-white-and-blue.

But the truth is the world of storytelling is in trouble, not merely in India where boycott calls are filling the void left by beloved movies and iconic stars. It is being felt all over the world, even in the fountainhead of entertainment. The movies that made America great are in remission. So are its heroes. The last great movie star is Tom Cruise who had to go back three decades to wow the world with his charm again in Top Gun. The last great actor is Tom Hanks, whose Forrest Gump remake couldn’t halt the down­ward trajectory of India’s very own actor-star Aamir Khan.

So, even as nimble-footed Korean boy bands and dark Spanish noir take over the nooks and crannies of an entertainment-overloaded audience, American behemoths throw big money at the next big thing. On the big screen, for instance, they hope The Flash will be the new money-making franchise, so much so that they are willing to put a lid on the controversies around the star, Ezra Miller, who is propelling it, unlike the treatment it meted out to another weirdly behaved actor Armie Hammer, who was dropped from several high-profile projects.

On the small screen, all eyes are on the two new myth-making universes.The Rings of Power is primarily based on the appendices of The Lord of the Rings, which focuses on the Second Age. Powered by Jeff Bezos’ personal interest in the project (he’s a fan of the Peter Jackson movies), Amazon Studios started developing The Rings of Power in 2017, spend­ing $250 million to purchase the rights from Tolkien’s estate. It’s the attraction of the familiar. Peter Jackson’s trilogies of The Lord of the Rings and The Hobbit have grossed more than $5.8 billion worldwide; and Game of Thrones was one of the biggest phenomena of the past decade, averaging 44 million viewers per episode across all platforms in its final season.

And they seem to be tapping the zeitgeist of having female-led universes, like Ms Marvel and Never Have I Ever, two cul­tural events which are riding the diversity wave. In The Rings of Power, Galadriel (played by British-born Morfydd Clark), is the elven ruler of Lothlórien and commander of the North­ern Armies who wants to hunt down her brother’s enemies. “Stand with me,” she says. “Ours was no chance meeting. Nor fate, nor destiny. Ours was the world of something greater.” In House of the Dragon, the young princess Rhaenyra, named heir to the Iron Throne, has to battle opponents—not the least of whom is her uncle, aptly named Daemon—for her kingdom.


The world of storytelling is in trouble, not merely in India where boycott calls are filling the void left by beloved movies and iconic stars. It is being felt all over the world, even in the fountainhead of entertainment. The movies that made America great are in remission. So are its heroes

Everyone hopes the two series will be this decade’s Star Wars and Star Trek but as writer William Goldman once said so famously, nobody knows anything. Still, everyone tries. Amazon Prime Video had the stars and showrunner JD Payne walk the Mumbai red carpet for the Asia-Pacific media making an entry in autorickshaws and rubbing shoulders with stars Hrithik Roshan, Tamannaah Bhatia, and Karan Johar. Competition is tough. House of the Dragon has already released its first episode and shattered the record set by the pilot of Games of Thrones.

India, with its rich epics, has already seen a co-existence on TV of two great epics, Ramayana and Mahabharata, in the ’80s. That deep-rooted narrative finds an outlet again and again, whether it is Baahubali or RRR. The intense world-building, familiar to those who have been raised on complex video games and their grandmothers’ storytelling, helps them connect to the new spheres of RRR and KGF. There is also the sense of community, in this age of atomisation, of being part of a fandom, a community with a shared secret code. It’s something southern film fans are familiar with, given the clubs devoted to the worship of the stars. It’s a different kind of fantasy, which allows them to transcend their reality, which is often not as palatable as the world they see onscreen.

Each of us, every one of us, must decide who we shall be, says a character in The Rings of Power. Indeed, the audience will decide whether they are Game of Thrones loyalists or make a powershift to the new ‘ring’. May the best myth-making win.

Amazon PrimeGame of ThronesHBOHouse of the DragonThe Lord of the Rings: The Rings of Power