In its 50th year, AIADMK is a divided house, handing the floor over to MK Stalin 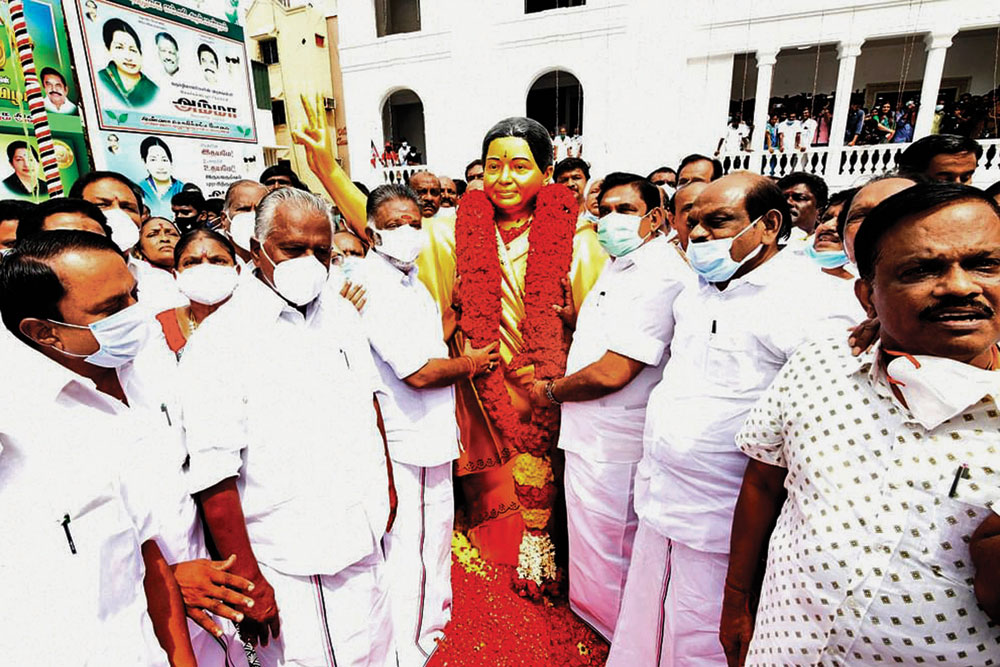 
AMONG THE RAFT OF celebrations announced by the All India Anna Dravida Munnetra Kazhagam (AIADMK) as it enters its 50th year is a belated move to name the party head office in Royapettah in Chennai “Puratchi Thalaivar MGR Maaligai” (Revolutionary Leader MGR Palace). Devoid of revolution and leadership, AIADMK today is a palace without a throne. To add to the irony, the building on Avvai Shanmugam Street was home to its founder MG Ramachandran and his widow Janaki who bequeathed it to the party—a party that J Jayalalithaa had wrested from her upon his death in 1987 and made her own, eventually reducing MGR to a perfunctory stamp-size memory. Today, as AIADMK once again goes through the convolutions of a power struggle in the aftermath of its defeat in the Assembly election, its twin custodians, Edappadi Palaniswami (EPS) and O Panneerselvam (OPS), are busy rifling through the past and expending time and rhetoric on laudatory references to MGR and Amma that they hope will resonate deep inside a supporter’s nervous system and keep him or her from deserting the fold.

According to party sources, the golden jubilee celebrations were to be low-key. But over the weekend, as VK Sasikala emerged from political exile to pay her respects to Jayalalithaa, her late mentor and companion, and in self-assured statements called for unity and strength, it was time for damage control. This time, she did not resort to the agitprop of thumping the grave thrice and muttering an angry oath. Nor did she visit the party office, where arrangements were in place to prevent her entry. Her unveiling a plaque at MGR’s memorial and unfurling of the party flag to reiterate her claim to the post of general secretary were enough to upset the AIADMK leadership, who had emerged from factionalism after Jayalalithaa’s death to put up a united front and ousted “Chinnamma”. “Who would include her in the party now? She was Amma’s helper—she cannot be the boss. If she is putting on an Oscar-worthy show now, it is because she is desperate for political relevance,” AIADMK leader and former minister D Jayakumar tells Open. “Even under dual leadership, we stuck together and performed well in the Assembly elections, winning 66 seats. Did the party floated by her nephew, TTV Dhinakaran, no doubt with her blessings, make any inroads?” Dhinakaran and his supporters were conspicuously absent from Sasikala’s comeback public appearance; it was Jayalalithaa’s car she arrived in and the mannerisms she adopted in an effort to redeem herself as “Chinnamma” in the eyes of the people.


Released from prison in January after serving a four-year sentence in a disproportionate assets case, Sasikala moved a Chennai court challenging her removal as AIADMK general secretary, but later announced that she would sit out the Assembly election—in a letter that was worded ambiguously enough that it could be interpreted as an intent to retire from politics. Clearly, retirement is far from what she has in mind. While AIADMK has denied the possibility of her inclusion, Jayakumar is one of the few party leaders to come down heavily on her. Speculation that she may be able to convince some party MLAs, especially those from the Mukkulathor community among whom her family still wields influence, to back her return to the helm of affairs has made pundits predict a vertical split in the party with the supporters of EPS, the face of AIADMK in the Gounder heartland of western Tamil Nadu, and leaders from the south parting ways.

As AIADMK goes through the convolutions of a power struggle, its twin custodians, Edappadi Palaniswami and O Panneerselvam, are expending time on laudatory references to MGR and Amma

“During the EPS regime, he had made district secretaries and ministers powerful, allowing them to amass a lot of wealth and thereby alienating cadres. Now after electoral failure, party workers are even more disheartened. With OPS unable to rally all the MLAs behind him and the BJP high command in Delhi leaving the party to its own devices, Sasikala has sensed opportunity. The chessboard will only get more interesting from here on,” says journalist Maalan Narayanan. While stakeholders in AIADMK sift the mythology of Amma for precious seeds, DMK is consolidating its gains with a take-no-prisoners approach. “The AIADMK top brass are busy grappling with the cases against them—while EPS and OPS are worried about the renewed investigation into the Kodanad heist-cum-murder [involving a series of mysterious deaths after a break-in attempt at Jayalalithaa’s estate in Kodanad in 2017], other senior leaders are having to answer for the corruption they indulged in. Normally, DMK would have ignored them, but Stalin clearly wants to earn a good name for himself while weakening his main adversaries. This is why the party focused singlemindedly on securing a massive victory in the rural local body polls,” Narayanan says. DMK, which formed the government in May, swept the local body polls held in nine districts earlier this month. This is the fourth consecutive win for Stalin, after the last local body, Lok Sabha and Assembly elections. “The victory comes as validation for governance backed by good intent. From delivering medicine at your doorstep—it was not in the manifesto—to cracking down on corruption, reclaiming temple lands and introducing reforms across departments, the government has focused on getting things done quickly,” says DMK MP DNV Senthilkumar.

NARAYANAN POINTS OUT that the DMK government hasn’t delivered on all its poll promises, including a monthly pension for women, instead focusing on high-visibility, low-cost measures. “It was the failure of the Soviet Union to counter the United States that allowed it to become all-powerful,” he says. “AIADMK should have taken to the streets when DMK leader Duraimurugan slandered MGR; instead, they calmly issued a statement. Stalin has meanwhile been operating both offensively and defensively, shrewdly taking the wind out of the opposition’s sails—for instance, he wasted no time re-opening temples after the state BJP staged a protest.”

Speculation that Sasikala may be able to convince some party MLAs, especially those from the Mukkulathor community among whom her family still wields influence, to back her return to the helm of affairs has made pundits predict a vertical split in the party with the supporters of EPS, the face of AIADMK in the Gounder heartland of Western Tamil Nadu, and leaders from the south parting ways

Four former ministers, including MR Vijayabaskar, SP Velumani and KC Veeramani, now find themselves facing disproportionate assets cases. The latest to be raided by the Directorate of Vigilance and Anti-Corruption (DVAC), former health minister C Vijaya Baskar, stands accused of illegally acquiring assets worth ₹ 27 crore. “The question is, can they take the rough and tumble of real politics? They ruled without accountability for five years, knowing they could not come back. Now there is no compulsion to stay together and support someone,” says Ramu Manivannan, professor and head of the department of politics and public administration at the University of Madras. “AIADMK’s sole purpose of existence is to oppose DMK. It does not have a vision, an ideology of its own. Its inability to put up an effective opposition therefore shows the party has touched its lowest point. And even more than that, the absence of an effective opposition leader has weakened the party.” With senior leaders now in “anti-slavery mode”, Sasikala is unlikely to assume control over the party, he says. “OPS, EPS and Sasikala are each only strong enough to destroy the others, but not enough to lead the party. AIADMK is destined to be an elephant without a mahout.”

Last week, as Chief Minister MK Stalin congratulated the winners of the local body polls, he told them that the role of the opposition in the state had now fallen to their “conscience”. While he wasn’t far off the mark, it would be wrong to dismiss AIADMK as a spent force, says Congress leader and MP Su Thirunavukkarasar. “When DMK came to power after defeating Kamaraj, he said that he wouldn’t criticise the government for the first six months. It is early days for the present-day government too—no one would vehemently oppose policies at this stage without it seeming like a case of sour grapes,” he says. “We cannot write off AIADMK. Our coalition had expected to win over 180 seats but they managed to cut into our victory. It is another matter how they will retain their hold over voters and continue the party legacy.”

“While the new government has been proactive in filing corruption cases against past ministers, there are still 13 complaints we had filed with the DVAC that are pending action,” says Jayaram Venkatesan, convenor of the anti-corruption NGO Arappor Iyakkam which had filed several complaints against the AIADMK government and taken them to court. “We had expected the new government to bring in end-to-end transparency in the tender process. In fact, the Chennai Corporation has switched to e-tenders for PDS and reported a saving of ` 100 crore a month. But other departments haven’t followed suit.” The government has also lagged in employment generation, providing direction to the state’s dire finances and fulfilling welfare schemes, he says. “On the one hand, AIADMK has failed to raise its voice, and on the other, the DMK government is disinclined to put out a report submitted by an expert panel on major lapses in construction of tenements in Pulianthope by PST Engineering Construction, which won the contract under the previous government. If political will is flagging already, it will be very hard to push reforms through when the honeymoon period is over.”

DMK swept the local body polls held in nine districts earlier this month. Congratulating the winners, chief minister MK Stalin told them the role of the opposition in the state had now fallen to their ‘conscience’

One could argue that the pandemic cheated DMK out of a honeymoon, but for a party that had been out of power for a decade, there could be nothing sweeter than electoral victory. “Within a short time, ministers have established a good working rapport with the Central Government. Ideologically, they may be poles apart, but when it comes to winning—the urban local body polls are round the corner, and post that, the run-up to the General Election may see DMK make a bid for national politics—Stalin is not very different from Narendra Modi,” says a party insider who did not wish to be named.