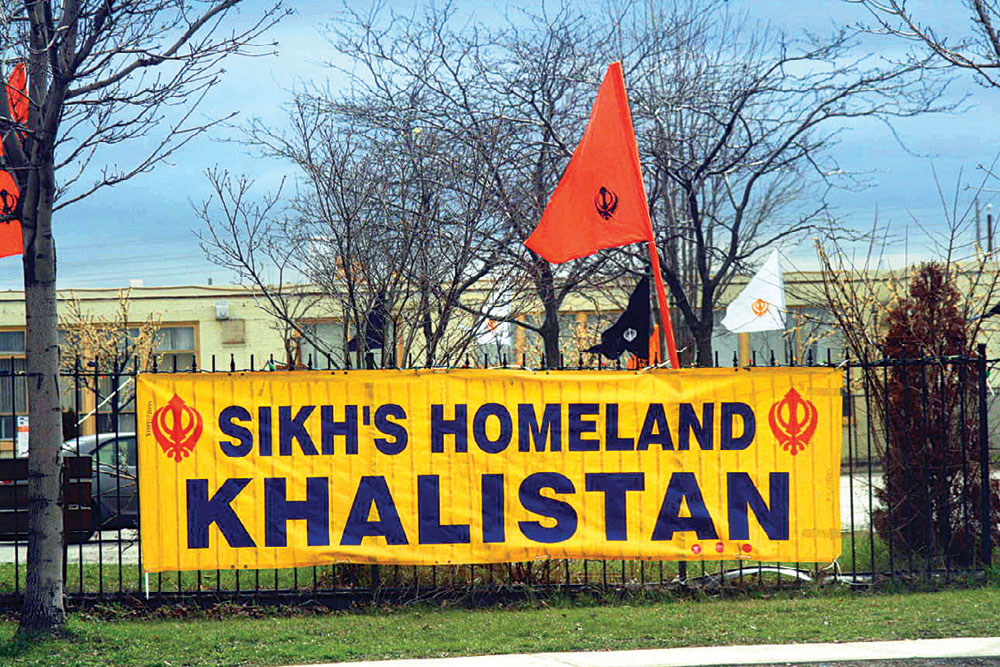 A Pro-Khalistan banner in Ontario, Canada


It is routine for Indian missions abroad and the Ministry of External Affairs (MEA) to issue advisories to Indians who are abroad. These are meant to keep them updated about any emergent situation or risk to them while they are outside India. But the advisory to Indian nationals and students in Canada issued on Friday was unusual in every way.

The advisory cautioned Indian nationals and students in Canada against the spate of hate crimes, sectarian violence and anti-India activities there. But then it went much further than the usual diplomatese in which such notices are couched. While noting that Indian authorities had taken up these incidents with the Canadian government, it said, “The perpetrators of these crimes have not been brought to justice so far in Canada.”

What the advisory hints at but does not spell out is the view in the Indian government that the activities of various Khalistani groups in Canada are directly supported by Pakistan which has backed many such individuals wanted in India. The latest instance of gang war that involved the killing of Punjabi singer Sidhu Moosewala also leads to a Canada-based gangster Goldy Brar.

While the wording of the advisory was unusual, it did reflect an unhappy reality that pervades bilateral relations ever since Justin Trudeau became Prime Minister in 2015. Relations were frosty even before Trudeau’s disastrous 2018 visit to India. That visit was marred by controversies from the start. At a dinner hosted in honour of Trudeau, one Jaspal Atwal, known for his anti-India sympathies, was invited as a guest. By the time his invitation was rescinded, the damage had been done.

At the heart of the Trudeau government’s inability to crackdown on Khalistani activists and sympathisers—a major irritant in bilateral ties between the two countries—is Trudeau’s reliance on the National Democratic Party (NDP) led by Jagmeet Singh. Under Singh, the NDP is a bearer of “Sikh interests” in Canada. In the Canadian House of Commons that has 338 seats, Trudeau’s Liberal Party of Canada commands 160 members. The threshold to remain in power is 170. It is here that the NDP led by Singh with its 25 seats in the Commons that are essential for Trudeau. Of NDP’s 25 seats, 13 are from British Columbia, a province in the grip of Khalistani sentiment and activities. Trudeau is immobilised by this political choice.

Khalistani activities in Canada have a long history. In this phase of terrorism in Punjab from 1979 to 1990, these activists could do little except provide “moral support” to terrorists in India. But it is also a matter of the separatist community’s growing economic and political clout that they can defy the law in Canada with impunity and engage in anti-India activities. In this, Canada now resembles any third world country where the law is discounted at the altar of politics.

India is right to caution its students and nationals in Canada as its requests to the government there have fallen on deaf ears. It is better to err on the side of caution while keeping Indians safe in such a country.