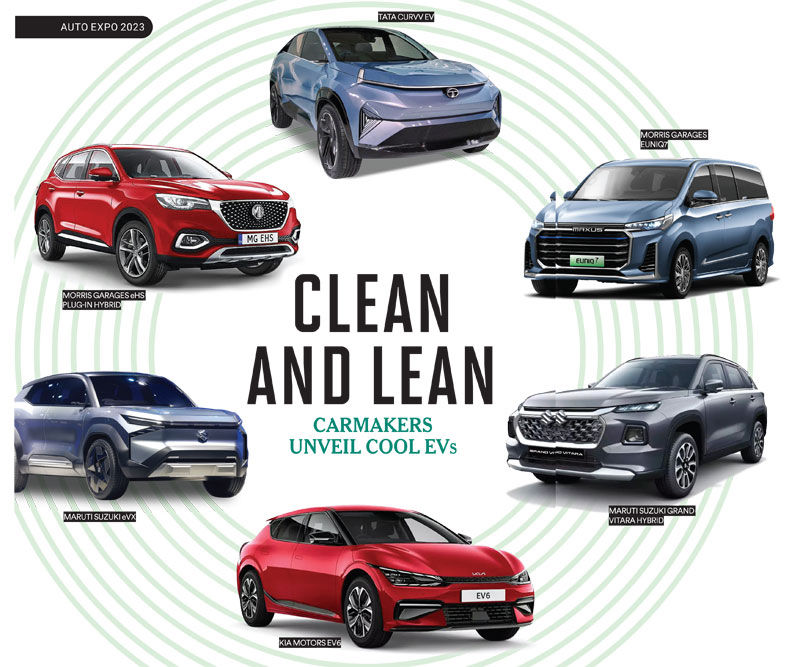 THE AUTO EXPO has returned—after a three-year hiatus induced by the Covid-19 pandemic—and the cornerstone of the exposition was the automakers’ roadmap to bring vehicles running on alternative fuels from the drawing boards to the shopfloor. Arguably, one of the biggest takeaways from the show is that sustainable mobility solutions are going to be the mainstay of the Indian automobile industry—it will not only reduce India’s oil import bill but realise the country’s plans to be carbon neutral by 2070.

Maruti Suzuki, India’s largest carmaker, set the tone for sustainability with the first launch of the expo—the global unveiling of its battery electric vehicle (BEV), the eVX—although this electric SUV was conceptualised, designed, and developed by parent company Suzuki Motor Company (SMC). “The Concept eVX is our first global strategic EV. We plan to bring it to market by 2025. There is a revolutionary change happening in the automotive industry to attain carbon neutrality. We want to launch a vehicle which is strong and apt for the Indian market,” says Toshihiro Suzuki, representative director and president, SMC—who specially came for the global launch of the eVX.

This launch is seen as a significant milestone by Maruti Suzuki towards its journey to get on the BEV bandwagon. While its competition—the likes of Tata Motors, Hyundai India, and Mahindra & Mahindra (which chose to skip this year’s expo)—has leapfrogged into the technology of BEVs, Maruti Suzuki and its partner Toyota Kirloskar Motor (TKM)—through SMC’s global alliance with Toyota Motor Corporation (TMC)—have decided that a one-size-fits-all approach does not address the needs of a diverse market like India. “One of the solutions to tackle carbon neutrality is by introducing BEVs, and other manufacturers in India have launched a BEV before us, but the solution can’t be one. We don’t want to get swayed by BEVs as the only solution. There are various other solutions, like improving the fuel efficiency of gasoline vehicles; introducing hybrid vehicles; vehicles running on alternative fuel, and flex-fuel technology. India is a huge country with a variety of users, and we want to expand in all directions,” explains Suzuki.

Therefore, it is unsurprising that Maruti Suzuki has bet big on self-charging hybrid electric vehicles (SHEV), where the engine drives an electric motor instead of wheels, and simultaneously charges an electric battery as well. The vehicle can switch between the engine and battery, or both, depending on how the car is being driven. The Grand Vitara, launched last year, is the first SHEV vehicle launched by Maruti. This technology has been developed by Toyota—who first innovated it 25 years ago. TKM has not stopped at SHEVs. It has unveiled prototypes of vehicles that will run on hydrogen and flex-fuel technologies.

“An SHEV vehicle with a renewable fuel like ethanol, such as the flex-fuel SHEV technology we have, has the lowest carbon footprint. Of course, the ideal case would be a BEV running on 100 per cent renewable energy, but with the current energy mix in Europe, the emission is 70g/km. On the other hand, an SHEV running on flex fuel in Brazilian conditions emits around 29g/km. The right way to look at the shift towards SHEV is tackling the issue of carbon emission,” says Vikram Gulati, country head and executive vice president, corporate affairs, TKM. According to Gulati, India has the leverage of surplus production of crops such as sugarcane, wheat, and rice. “Even with the stubble burning that happens during the winter months, the current technology can be used to make ethanol. From a fuel-side supply perspective, we are blessed to have surplus fuel.” 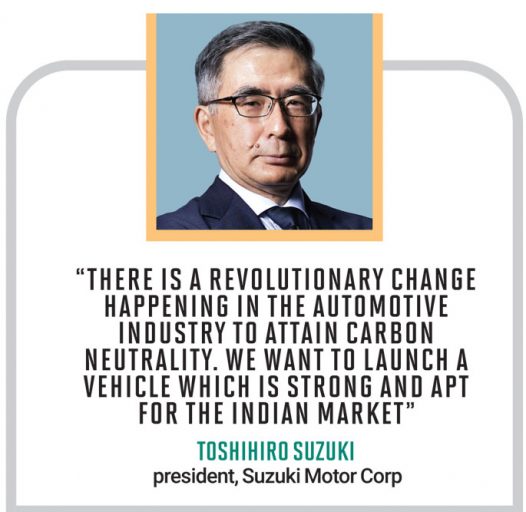 Hardeep Singh Puri, Union minister of Petroleum and Natural Gas, and Housing and Urban Affairs, has assured that the E20 fuel, which consists of 20 per cent ethanol and 80 per cent of petrol, will be available this year. “India is ready from the supply side to launch E20 and the E20 fuel will be available from April 2023. The target for 20 per cent blending has been advanced by five years from 2030 to 2025,” he said at the Society of Indian Automobile Manufacturers’ (SIAM) International Conference on Biofuels—A Pathway Towards Sustainable Future. He added that achieving E20 blending with petrol by 2025 would help save foreign exchange for the country worth about ₹30,000 crore per annum. Along with TKM, Maruti Suzuki displayed their prototypes of vehicles running on flex fuel.

ANOTHER ALTERNATIVE FUEL that carmakers are looking at is hydrogen. “We have the entire range of technologies displayed here at the expo—from BEVs to hydrogen, to hydrogen cars with a gasoline engine, which is the latest technology. What will determine the ideal technology for India depends on consumer adoption, which in turn aligns to the energy mix, infrastructure readiness, consumer needs, and the demography,” explains Gulati. Atul Sood, associate vice president (sales and strategic marketing), TKM, concurs. “Our philosophy has been simple. We will provide whatever technology that suits the energy mix and customer needs in India,” he says. The Union Cabinet recently approved the National Green Hydrogen Mission, with an initial outlay of ₹19,744 crore, which should give more carmakers a fillip to explore technologies that use hydrogen as fuel.

A carmaker that has shown its technological prowess in cars running on hydrogen is Morris Garages India (MG Motor India), the Indian arm of the Chinese-owned, British-born MG brand. It unveiled the EUNIQ 7, a hydrogen fuel cell-powered vehicle at the expo. The carmaker claims that it not only just emits water but also performs like an air purifier—purifying air equivalent to 150 adults breathing in just one hour of driving. MG first launched the hydrogen fuel cell system as the Phoenix No 1 fuel cell vehicle project in 2001, and the EUNIQ 7 is powered by the PROME P390—the newly developed third-generation fuel cell system. MG also claims that the fuel cell system can be used in fuel cell passenger cars, city buses, medium and heavy trucks, and other vehicle platforms. 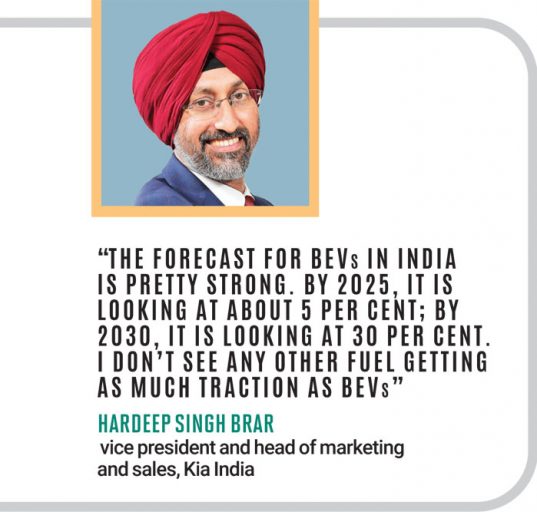 “The EUNIQ 7, along with the rest of the vehicles, are all production-ready vehicles, which we sell globally. Portfolio-wise, we have a diverse range of vehicles. Based on the consumer response and policy interventions by the government, we could possibly launch these vehicles,” says Rajeev Chaba, president, and managing director, MG Motor India. However, Chaba thinks that hydrogen is an alternative fuel for the future, as currently, it is not commercially viable. “The government is pushing for hydrogen. Depending on the commercial viability of hydrogen, we could launch a vehicle like the EUNIQ 7,” he says.

However, according to Chaba, a major constraint that carmakers face in hydrogen fuel cell-powered vehicles is beating the cost target of hydrogen. “Hydrogen is currently under commercial vehicle application. It is too early to determine the cost target for passenger vehicles, but for commercial vehicles, it is $600/kWh. It must become $150 to be commercially viable, and for people to think to swap it for diesel engines. That is many years away,” he explains. While most carmakers are at a prototype stage, MG, according to Chaba, is selling a “reasonable” number of hydrogen fuel cells worldwide. “We have sold close to 3,000 fuel cells already. It is in the next stage after the pilot,” he says.

The lack of commercial viability of hydrogen fuel cells in passenger vehicles, along with tax incentives for hybrid vehicles—both SHEVs and plug-in hybrid electric vehicles (PHEV), in which the battery can be charged through charging equipment—made MG Motor India currently focus on BEVs. “If the government says that we want to promote it, and incentivises hybrid vehicles through a reduction in GST, we can be there, but otherwise, we will keep a focus on BEVs,” says Chaba. Currently, BEVs in the passenger vehicle segment are placed in the 5 per cent GST bracket, whereas hybrid vehicles are charged on par with gasoline vehicles, although Sood of TKM says there is a nominal difference in the GST.

MG MOTOR INDIA, despite only a single BEV in its portfolio, is currently the second-largest maker of what still is a nascent market of BEVs, according to data from the Federation of Automobile Dealers Association (FADA).

The number one spot, and currently by a yawning gap, is occupied by Tata Motors—which has aggressively forayed into the BEV segment by converting its existing portfolio into BEVs, and now has three BEVs in the Indian market, which is its first phase of electrification. “The first phase was a low-investment, low-risk one, where we converted models from our existing range into electric,” says Shailesh Chandra, managing director, Tata Motors Passenger Vehicles and Tata Passenger Electric Mobility. Not only has Tata Motors shown its previously unveiled future BEV concepts of AVINYA and CURVV, but it has also taken the wraps off the BEV iteration of its Harrier SUV, along with the reincarnated Sierra, in a BEV avatar. 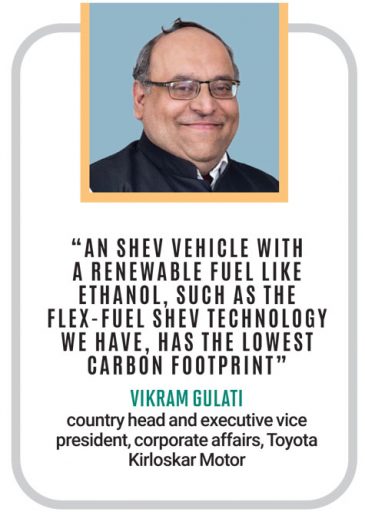 However, Tata Motors does acknowledge the lack of competition in the market. “The market share we have means that there is a lack of competition. These levels of market share are not sustainable. When competition comes, it will benefit us as well. When there are options, the market will grow at a much faster rate,” he says. Chandra says that the reason why Tata Motors chose to leapfrog into BEV was it wanted to invest in a technology that is going to be prevalent in the long run. “We believe that hybrids, after a certain point, are going to lose relevance. We have never invested in hybrid technology, and as a company, we have made the conscious choice of following what the automobile industry will eventually veer towards.”

Kia India, the Indian unit of the South Korean carmaker, is also sticking to BEVs, despite a robust hybrid portfolio worldwide. “The forecast for BEVs in India is pretty strong. By 2025, it is looking at about 5 per cent; by 2030, it is looking at 30 per cent. I don’t see any other fuel getting as much traction as BEVs, so we would like to stick with what is certain. There is a lot of talk about hybrids, but it is only an interim solution, and we do not want to invest in something now, and two years later, get into BEVs,” says Hardeep Singh Brar, vice president and head of marketing and sales, Kia India.

Last year, Kia India unveiled the first BEV for the Indian market, the EV6. Despite its steep price of ₹59.95 lakh and allocation to only a hundred units, it received an overwhelming response with over 400 bookings. Brar says the EV6 has been in short supply globally, and the company has seen cancellations. “There have been cancellations because the consumer has the choice of opting for more readily available models. Our increase in supply is restricted to a great extent. The cancellations were within our control, and in line with our expectations. It was the lowest across all our portfolios,” he says.

Sustainable mobility took centrestage at the 2023 Auto Expo, and while there are many ways to go about it, ultimately, whichever technology wins the consumer mandate is going to rule the roads. But with the diverse and complex nature of the Indian market, there may not be one winner.