How Malkangiri’s cut-off area, a Maoist stronghold till recently, was reconnected to Odisha 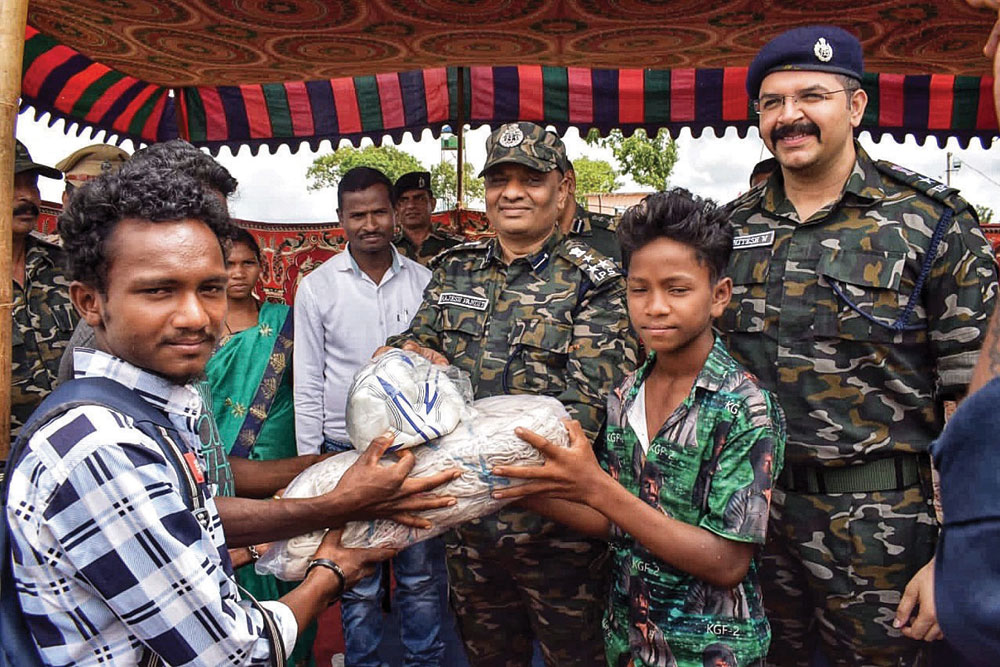 Maoist sympathisers surrender to BSF and Odisha Police in Malkangiri


ON September 17, over 700 Maoist supporters surrendered in Odisha’s Malkangiri district in an area until recently known as the “cut-off area” and rechristened “Swabhiman Anchal” (sanctuary of pride) by the state government. This is an area along the Odisha-Andhra Pradesh border which had been a stronghold of Maoists for several years. The surrendered supporters, almost half of them part of the Maoist militia, came from villages like Patraput, Ondeipadar and Bhajaguda. According to the police, many of them were earlier involved in helping Maoists in ambushes against security forces and other violent activities.

These submissions are the latest in a spate of surrenders, facilitated by the security forces, putting an almost total end to Maoist activities in this area. It is in this area in 2008 that Maoists planned one of their biggest ambushes, killing 39 commandos of the elite anti-Maoist Greyhound force. In 2011, Maoists abducted District Collector Vineel Krishna when he went to visit the area for official work. A year later, Maoists killed four personnel belonging to the Border Security Force (BSF), including a commandant.

How this region came to be known as the “cut-off” is a telling tale of how the Indian state remained absent from the lives of marginalised and poor people, which helped violent movements like Maoism make inroads in these parts. The area, which is essentially a cluster of 151 villages, got cut off from the rest of Odisha with work on the construction of the Balimela reservoir. The construction began in the early 1960s and finished in 1977. It led to the submersion of over 17,000 hectares of land, affecting 89 villages. The reservoir eventually created a 60 km-long water channel which cut off 151 villages from three sides. Between 1975 and 1978, the waterlocked tribal families in these villages had no access to Odisha and could only go to Andhra.

In no time, the area was erased from memory. In later years, the Odisha government began a steamer service, but it hardly served any purpose. About 35,000 people remained cut-off, depending mostly on the forest for their sustenance. It is this feature that attracted the Maoist guerrillas to this area. Gradually, in the absence of any government, they became the rulers here. “The local population hardly had any idea that there existed a government for the welfare of the people,” says Inspector-General (Operations) of Odisha Police Amitabh Thakur.

In the early 1980s, the government announced the construction of a bridge over the Gurupriya river to connect the area with the mainland. But with weak intent, it largely remained on paper. Meanwhile, Maoists only grew in strength, and the area became a safe bastion. Several times, they would cross over to Chhattisgarh, attack security forces there and then get back safely to the cut-off area, using boats. Between 2000 and 2018, these parts experienced about 500 incidents of Maoist violence, resulting in the death of close to a hundred security personnel.

Things began to change a bit after the killing of BSF personnel in 2012. It coincided with an all-out operation against Maoists in all affected states, including Odisha. “To bring development to this area and for launching effective operations against Maoists, it was first important that security camps be put in place,” says Thakur.

The BSF established a COB (Company Operating Base) on both sides of the proposed bridge to facilitate its construction. In between, the Maoists struck again, in 2015, targeting a BSF party with an improvised explosive device (IED).

By 2018, the bridge was ready and was inaugurated by the chief minister. But for security forces, it was just the beginning of a difficult task. Once, when one went across, about 60km of area, from Janbai to Jantri, was under Maoist control. After the construction, a COB was established at Jantapai, close to the bridge. A year later, once the COB had established control, the government began to lay roads connecting interior villages. Shortly afterwards, another COB was established at a place called Vantalguda. This helped construction workers to press heavy machinery like JCBs to expedite road construction. Despite various challenges like IEDs, the BSF moved forward, getting into Jodambo, about 8km away. This is a valley between two hills and served as a sort of Maoist capital. Once the BSF and police held Jodambo, it enabled them access to almost real-time intelligence about Maoist activities in the area.


How this area came to be known as the ‘cut-off’ is a telling tale of how the Indian state had remained absent from the lives of marginalised people, which helped violent movements such as Maoism make inroads

When the security forces entered Jodambo, they found a two-storied concrete building in a village that otherwise has thatched huts. This, it is believed, was constructed by Maoists or at least managed by them. The building was taken over by the BSF, forcing Maoists to retreat farther up.

In January 2020, work started on yet another stretch of road, connecting Vantalguda with Jodambo. On January 25, 2020, a faceoff between tribals and Maoists created another gorge between them. That night, armed Maoists came to Janturai, a village adjacent to Jodambo, threatening villagers that they should not help in road-building. The ensuing altercation turned violent as a group of women attacked the guerrillas, forcing them to retreat. Some reports suggest that a Maoist was even killed. In retaliation, Maoists burnt down a few houses.

After this, Maoists met the same resistance in several villages. Prominent among them was Gurasethu, which was considered their ideological headquarters. In village Khajuriguda, the killing of a tribal by Maoists on suspicion of being a police informer further enraged tribals. They began helping the security forces, and as a result, they were able to build another COB that year in October. It was followed by more COBs, one in December 2021 and another in March this year.

As Maoists left, things began to look up. The Jodambo health centre is now effectively running as a healthcare facility. In January this year, the BSF began a boat ambulance service for moving patients quickly to hospitals in main Malkangiri by water, which is faster than road transport. With mobile connectivity coming to the area in 2020, people are now connected to the outside world. “There is a big scope for improvement in connectivity, but with Maoists gone, it will only get better from here,” says a senior government official in Malkangiri. Several residential schools have been started, and many welfare schemes have reached the area as well. Many villagers, according to the police, were forced by Maoists to grow cannabis. But now, the cultivation of turmeric and drumsticks has been introduced to enable people to earn their livelihood properly.

“At least 7,500 mobile phones were distributed among people to meet their requirements during the Covid pandemic,” says Thakur. In March this year, the area saw 77 per cent polling in the gram panchayat elections. “Our work is paying dividends. We are hoping that the same model can be replicated in areas where Maoists are still in a strong position,” he says.