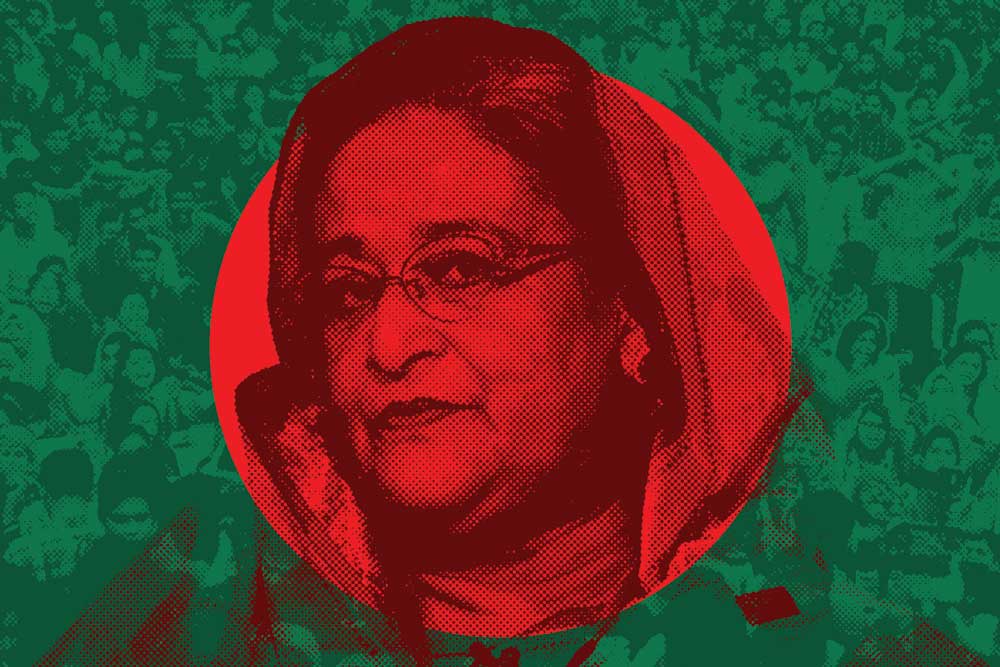 
The Bangladesh government ran into a political squall last week, necessitating an embarrassing retreat. The list of 10,789 collaborators, known in local parlance as razakars, of the Pakistan army during Bangladesh’s War of Liberation, was almost immediately revealed to contain the names of a good number of freedom fighters and their families. Public outrage swiftly followed. There has so far been no explanation of how freedom fighters’ names came to be mixed up with those of elements that assisted the Pakistani forces in killing, kidnapping and raping Bengalis in 1971. But the government stepped back swiftly, withdrawing the list and promising to come up with a fresh one later.

The list was supposed to be the first in what promised to be a series on the identities and roles played by the razakars, so named by the occupation forces during the nine-month guerrilla war for Bangladesh’s independence. Official estimates put the number of Bengalis killed by the army and its local agents at three million. As many as 200,000 women were raped and whole villages and towns were pillaged in the course of the war. With the liberation of Bangladesh by a joint command of Indian and Bangladesh forces in December 1971, the government of the new country led by its founding father Sheikh Mujibur Rahman decreed a Collaborators Act in early 1972. Thousands of men were accused of helping the Pakistan army in committing genocide, with cases being initiated against them. In 1973, through a general amnesty, the government let a large number of the accused go free on the ground that their crimes were of a minor nature. But the clemency did not apply to those charged with murder, rape, arson and other serious acts of criminality.

It was Bangladesh’s grave misfortune that three and a half years into independence, Sheikh Mujibur Rahman and most of his family were assassinated in a violent coup d’état in August 1975. Barely three months later, in early November of the year, the four political leaders who had played a pivotal role in the formation of a government-in-exile for the country in April 1971, eventually leading Bangladesh to independence, were murdered by soldiers in the central jail in Dhaka. In December 1975, the military regime that had seized power moved to annul the Collaborators Act, facilitating the return of the 1971 pro-Pakistan elements to the political centre stage. Decades later, the Awami League led by current Prime Minister Sheikh Hasina, made it an election pledge to try leading collaborators over their role in 1971. A number of them were tried before special tribunals, sentenced to death and sent to the gallows.

That said, the demand has grown in recent years for lists of collaborators of the Pakistan army to be compiled and publicized. With rightwing elements increasingly making inroads into national politics, the country’s secular forces have been advocating a hard position in demanding that Bangladesh’s original underpinning of secularism, one of the four fundamental principles enshrined in the constitution as it was framed and adopted in 1972, be reasserted. And a sure means of doing that was a naming and shaming of the Bengalis who forty eight years ago took upon themselves the role of quislings happy to assist the occupation army. Hence the list made public last week. But enthusiasm over the list quickly dissipated over the adulterated nature of the list. Interestingly as also intriguingly, though, no heads have rolled over the fiasco.

The home ministry and the ministry of liberation war affairs, both associated with the list, have been pointing the finger at each other. Liberation War Affairs Minister Mozammel Haque made it known that the list of the collaborators had been provided to his ministry by the ministry of home affairs. Home Minister Asaduzzaman Khan, for his part, retorted that it should have been for the liberation war affairs ministry to verify the names on the list before making it public. It was eventually left to Prime Minister Sheikh Hasina to order the withdrawal of the list in a clear move to stem the public outrage caused by the flaws in it.

The collaborators list is a hint of the degree to which the War of Liberation continues to exercise, justifiably, minds in Bangladesh. Over a number of years, questions have arisen over lists of freedom fighters prepared on the watch of different governments in the country. In recent years, instances of senior government officials coming by false freedom fighter certificates in attempts to secure extensions in service have shocked the country. While such disturbing incidents have left citizens in a state of distress, there are too the stories of freedom fighters eking out a threadbare existence in various regions of the country. Many of the freedom fighters, part of the wartime guerrilla force known as the Mukti Bahini in 1971, have gone to their graves in the last nearly half a century. The descendants of many of them are leading lives in various states of misery without complaint in the villages and towns of the country. The government has of course repeatedly stated that freedom fighters’ children and other descendants will be provided with honours and privileges in recognition of the gallant role played by their preceding generation in the war. Examinations for the civil service have reserved quotas for the children of freedom fighters, which is a mark of the profound esteem in which the old soldiers of the Mukti Bahini are held in Bangladesh.

The furore over the collaborators list has led to questions being asked about the people behind its preparation. The suspicion is that the entire bad exercise was carried out by a bureaucracy unwilling or unable to check and cross-check facts. Given that the government now means to have a fresh list prepared, wisdom demands that the services and advice of historians and researchers engaged in studies of the 1971 war be solicited. With the country preparing to observe the birth centenary of its founder Bangabandhu Sheikh Mujibur Rahman next year and the fiftieth anniversary of its emergence as a sovereign state in 2021, the government cannot any more afford to be embarrassed over questions of history. After all, the role of the ruling Awami League has been paramount in the making of that history.