The Spirit of Defiance

Alison Klayman on making a documentary on Ai Weiwei, an artist the Chinese government fears 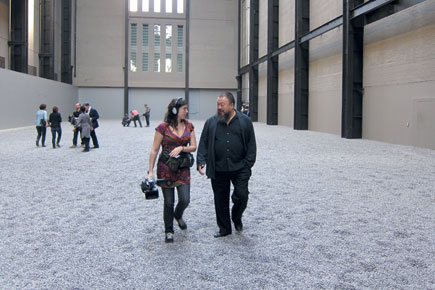 Alison Klayman on making a documentary on Ai Weiwei, an artist the Chinese government fears


In November 2010, the Chinese government sent a notice to Chinese artist and activist Ai Weiwei, informing him that his newly constructed art studio would have to be demolished since it was illegally constructed. That notice was a new low even by the dismal standards of the Chinese authorities. It was, in fact, the same authorities that had invited Ai, two years earlier, to put up the studio in the first place, as part of a new cultural hub the municipal commission had planned.

Having toiled endlessly on the project for two years, Ai was naturally expected by everyone to be incensed and to hit out at the authorities through the media or gather public support to expose the hypocrisy of the government. But Ai did something rather strange. The man, who had once famously photographed himself dropping a Han dynasty urn as a statement against the archaic value system of China, threw a ‘demolition party’.

He invited his many thousands of Twitter followers to this party, where he’d serve ‘river crab’, the name of which in Mandarin sounds similar to the name for the Chinese government ideology of ‘harmonious society’, and is often used as a euphemism for censorship. The authorities acted swiftly and put him under house arrest to stop this ‘celebration’ from taking place.

Even though Ai was not allowed to attend his own party, over 10,000 of his supporters and fans, both young and old, turned up at the studio, proudly displaying the spirit of defiance. These were ordinary people without a lot at stake, but being at the demolition party that day, even though Ai himself was absent, meant that they stood for something bigger than themselves—they stood for freedom of expression, they stood for the right to dissent and they stood for the inspiring ideology of Ai Weiwei, of being ‘never sorry’ for what you believe in.

A documentary, Ai Weiwei: Never Sorry, explores this ideology of Ai and his followers, while also acting as a social and political commentary on the state of affairs in China. The film, which won a Special Jury Prize at the 2012 Sundance Film Festival and recently premiered at the Mumbai Film Festival, has travelled to more than 25 other film festivals across the world, and has come in for high praise for both its content and the bravado of its 28-year-old director, American part-time journalist Alison Klayman.

“The funny thing here is that when I started shooting Ai, I wasn’t even aware of who he was, nor did I have any inkling that he would become such a global figure and symbol for free expression,” says Alison in a conversation over Skype from New York, where she is resting for a day before heading for the Abu Dhabi Film Festival.

An aspiring filmmaker, Alison had first travelled to China for “an adventure” and then stayed back because she felt she was “just getting started”. She had already spent two years in the country learning Mandarin and doing several odd jobs, including working on a Jackie Chan movie, voicing cartoons, making fake dead bodies for a prop studio and practising freelance journalism, before a friend approached her to make a small video on the artist Ai Weiwei in late 2008 to accompany an exhibition of his works that she was curating at an art gallery in Beijing.

“In the very first week of filming him, I saw the need for a feature film on him,” says Alison. “He was such an incredible, free-thinking and powerful character to watch and be with, and there was so much more to his personality than his art, like his blog, his stance on censorship or his activism, that somewhere, I honestly felt that if more people across the world learnt about him, it would contribute in a big way to their understanding of China.”

And so, without knowing where or what it would lead to, Alison started visiting and filming Ai frequently, attempting to show Ai as not just an artist or activist, but “a product of his biography, personality and circumstances, to present a really intimate and complicated look at him, as opposed to a straightforward narrative of his life”.

Alison realised that her “art project”, as she called it at the time, had turned into something bigger when Ai’s mother visited him, and in a heartwarming moment, expressed both her pride at Ai’s actions and her fear that he may be punished for it. “When he let me film that scene, I knew that I had gotten through to him because Ai never lets anyone film his personal life,” says Alison. “I got really excited, because by that time, I had travelled to his shows and knew he was very famous, and at that moment, I had also managed to capture the man behind it all.”

The only journalist to have ever gained such access to the global celebrity, Alison believes Ai let her film his life because unlike other journalists, she never had an ulterior motive when she started documenting it. “My first questions to him were very basic, like ‘Why aren’t you in any trouble?’ or ‘How are you not in jail yet?’” she laughs. “And I think he liked the fact that I was genuinely curious to know more about him, and didn’t have any agenda in doing so. He likes young people, and he started trusting me and my intentions. He also liked the 20-minute video I had made on him for the exhibition, though he saw it a good two months later.”

It was a mere coincidence, although an uncanny one, that within months of filming Ai, in May 2009, Alison’s accidental prophesy came true. She had met Ai at an unfortunate time in China’s history, when a deadly earthquake in Sichuan province had killed an estimated 68,000 people and left around 10 million people homeless. Many of the deceased included schoolchildren, and the trauma of the grieving families was only worsened when a corruption scandal, alleging that the school buildings were inadequately engineered, erupted on the internet and in the world media.

The government ferociously denied the charges, but refused to release the exact numbers and names of the schoolchildren who had passed away. As more and more Chinese citizens protested, Ai Weiwei, along with another Chinese artist, took on the task of a ‘citizen’s investigation’ aimed at compiling a list of the students who had died in the earthquake. Ai involved many young volunteers in this task, and by April 2009, had put together a list of 5,385 names, which he published on his blog.

The government swung into action. Ai’s blog, on which he would voice his thoughts and opinions almost as often as he would breathe, was shut down. He was put under permanent video surveillance, and police officials followed and monitored him 24×7. Things became even more serious in August 2009, when, on a trip to Chengdu to testify at the trial of fellow investigator, Tan Zuoren, Ai was beaten up by the police.

“On that trip, things became potentially dangerous,” Alison recalls. “I was more scared for Ai Weiwei and his assistants and volunteers because I felt the risk for Chinese citizens was more than the risk I faced as a foreign national. Everyone used to say that Ai wouldn’t be under any danger because he had foreign support, but I always felt that he was never really safe and that incident confirmed it to me.”

Being part of Ai’s entourage, Alison too had to deal with police officials firsthand, just as bravely as the others. A particularly unnerving scene in the film shows the aftermath of Ai Weiwei’s second trip to Chengdu, in 2010, to lodge a complaint against the police officer who hit him. After officially filing his complaint, Ai invited his Twitter followers to dinner at a street-side restaurant (Ai turned to Twitter after his blog, to great effect). It was a friendly gathering but a uniformed police officer started filming the occasion and the faces of the people present. On noticing that, Zhao Zhao, Ai’s personal biographer, started filming the police officer in the act. Alison captured the tension of the two defiant men filming each other on her own camera.

“It was quite scary, but that was probably the first time I realised I had material for a movie,” chuckles Alison. “I knew that if I was doing a documentary on Ai Weiwei, it was pertinent that this stuff be included in it. Once I was doing this, I knew that I had to do this responsibly, and so I covered all these incidents too.”

Ai emerged even more rebellious and determined from the rough treatment and subsequent demolition of his studio, but by April 2011, the Chinese authorities had had enough. Ai was arrested for alleged ‘economic crimes’ and tax evasion. Ai was missing for 81 days—days which resulted in a huge public outcry across the world and led to a ‘Free Ai Weiwei’ street art campaign by his supporters and fans.

Alison, who became an unofficial spokesperson for Ai Weiwei, admits those as difficult days for her. “I only see myself as a socially aware filmmaker and not an activist, but in those days, I had to become both, although I was uncomfortable about it,” she says. “But what happened with Ai Weiwei was completely unjust and I was afraid for his life. I felt that I needed to bring the attention of the media to what was going on. I was in New York at the time and so I could speak freely because free speech in China was almost clamped by that time, for fear of a Jasmine revolution happening there.”

By that time, Alison was in the process of finishing the documentary she had been filming for two whole years. “But I didn’t want to end a film about such an inspirational figure on a defeated note. So the ending changed about a thousand times, until 81 days later, Ai Weiwei was released.”

In his release, the documentary also found a natural end to a distinct arc in Ai’s life, as a global outpouring of support for Ai sent out an unambigous message of hope, love and inspiration. In fact, within a few days of his release, over 30,000 of Ai’s fans contributed money that helped Ai pay off $1.35 million of the $1.85 million fine levied on him.

“In detaining him for 81 days and putting him through psychological torture, the Chinese authorities thought they had crushed his spirit,” says Alison, “but I wanted to end on a note that proved that there was still some fight left in him.”

Even as Ai battles the remaining charges against him in China today, bootlegged versions of Alison’s documentary have gone viral online in the country, inspiring many a Chinese citizen. “I have met so many young Chinese students in various festivals across the world and they’ve all said only one thing to me—‘Thank you for making the documentary’,” says Alison, with a smile.

Alison insists that not only will she push this documentary and the cause of Ai Weiwei as wide and far as possible, she will also continue making other socially pertinent documentaries for as long as she can. And that is poetic, in a sense, because she is only following in the footprints of Ai Weiwei, who says in her documentary, “It is the responsibility of an artist to protect the freedom of expression. And as an artist, I’ll remain an eternal optimist about change.”